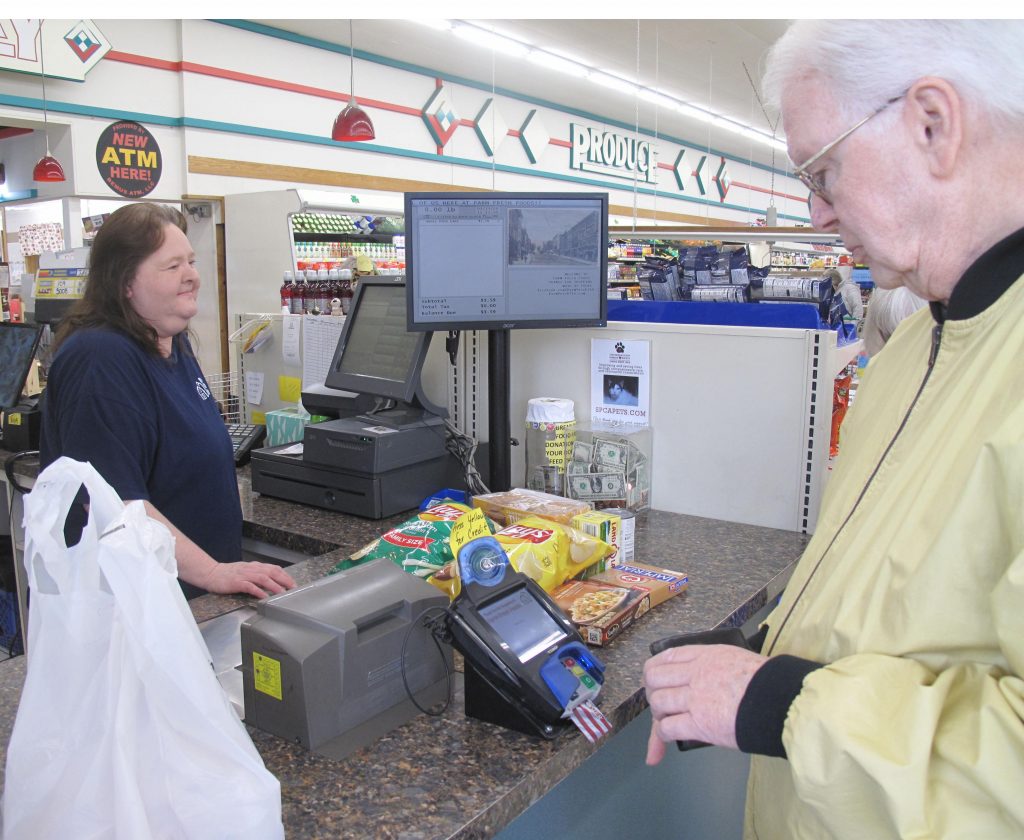 Farm Fresh Foods, located at 703 W. Third St., Jamestown, has been given a wavier to continue using plastic grocery bags until April 1. Dan Brown, Farm Fresh Foods owner, said he still has 80,000 plastic bags to use and is trying to “whittle” down that amount before the April 1 deadline.

“We received an email from our wholesaler,” Brown said about still be able to continue using plastic bags. “(The new law) did go into practice March 1, but we got a month-long wavier so we are going to take advantage of that time.”

“We are going to use the plastic bag to try and deplete the inventory,” Brown said.

Dollar General in the South Side Plaza is also still using plastic bags as well.

Enforcement of New York’s plastic bag ban has also been pushed off one month after an eleventh-hour lawsuit was filed challenging the legislation. The lawsuit, filed by an association of New York City bodega and deli owners, set out to sue the New York State Department of Environmental Conservation. The plaintiffs argued that regulations on which types of bags were banned was inconsistent with the 2019 adopted law. According to a court order, a lawyer representing the DEC agreed at a hearing that no fines in relation to the New York State Bag Waste Reduction Act would be imposed until April 1, giving businesses a one-month grace period on enforcement.

Last spring, the state Legislature passed a law banning single-use plastic bags. The state plastic bag ban was first proposed nearly two years ago as an environmental measure by Gov. Andrew Cuomo. According to the state Department of Environmental Conservation website, consumers can use any type of reusable bag, such as one made of cloth.

Some bags are exempt under the law, so plastic bags may still be distributed to consumers in a few specific circumstances, such as a bag used by a pharmacy to carry prescription drugs, and produce bags for bulk items such as fruits and vegetables.

Chuck Nazzaro, D-Jamestown and committee chairman, said according to the new law passed by the state Legislature last April, counties and cities have the option to charge 5 cents for paper bags, with 3 cents going to the state’s Environmental Protection Fund and 2 cents eventually refunded to local governments. However, he said the funding the county could receive, if it imposed the 5-cent fee, would have to be used to help lower-income people purchase reusable bags. He said that’s “not a bad purpose,” but would be an administrative nightmare for county officials. He proposed that the county should not charge the 5-cent fee for paper bags. Other members of the committee and legislature agreed to not impose the 5-cent charge for paper bags.

Stores in the county on their own can charge 5 cents for paper bags. In January, Wegmans announced it would no longer use plastic bags as o Jan. 27 and would start charging customers 5 cents for each paper bag, with the proceeds going to local food banks.