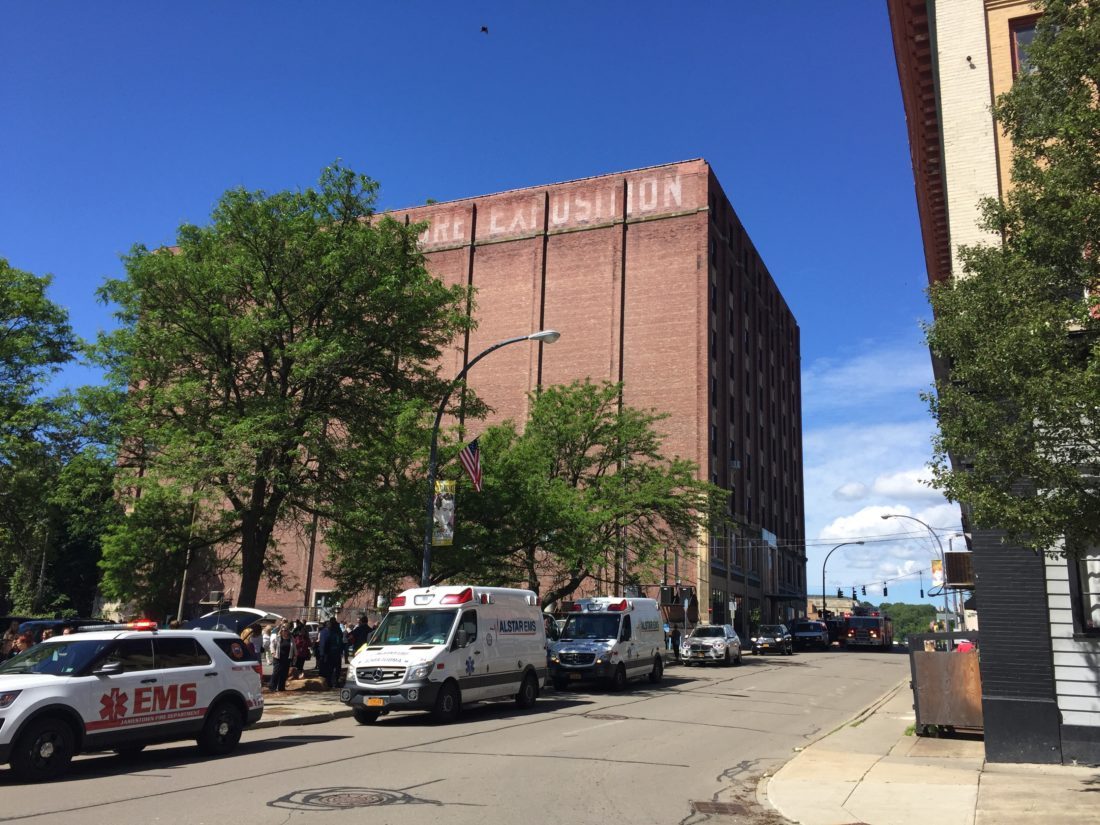 A Jamestown woman has filed suit in state Supreme Court in Mayville asking for damages caused by a cooling system leak in June 2017. The leak sent 14 people to the hospital. P-J file photo by Eric Tichy

A Jamestown woman has filed a suit alleging her health has been affected by a 2017 cooling system leak in the Furniture Mart building, 111. W. Second St., Jamestown.

Jennifer Asel, represented by Brian K. Towey of Buffalo, has filed a suit in state Supreme Court in Mayville asking for damages from Stormer Mechanical Services, U.S. Commercial Habitat and Arthur N. Bailey. Bailey and U.S. Commercial Habitat are the owners of the Furniture Mart building while Stormer Mechanical had been hired to maintain and repair the building’s HVAC system.

Roughly 30 people were treated following a cooling system leak caused by a broken valve at the former Furniture Mart building on June 8, 2017. Jamestown firefighters and area first responders responded to the scene and found a coolant leak in the building. Occupants of the building were evacuated before first responders arrived. Many people were treated on scene while a number were sent to UPMC Chautauqua WCA for breathing difficulties. Chet Harvey, then-Jamestown deputy fire chief, said the emergency room saw 14 people who came from the building, which at the time primarily housed The Connection, a call center outsourcing company.

Alstar Ambulance handled EMS response while the Jamestown Fire Department secured the building. A triage center was set up near the scene to assist patients. Volunteer fire companies from Busti, Kiantone, Fluvanna and Celoron also responded to transport patients to WCA.

Asel’s attorney wrote in the lawsuit filing that Asel suffered serious respiratory and other injuries.

“That as a result of the negligence, carelessness and recklessness of the defendants, the plaintiff, Jennifer Asel, suffered severe and serious injuries and was rendered sick, sore, lame, disabled and so remains having suffered, among other things, a severe and permanent respiratory injury; headaches, dizziness, inability to attend to her usual duties for a considerable time; requiring extended medical treatment and attention; incurring expenses and costs; suffering financial hardship; suffering loss of enjoyment of life; suffering grievious physical pain and mental anguish and will continue to suffer pain for a considerable time to come,” Towey wrote in his lawsuit.