Melissa Lyon with spotted draft horses Sam and Susie during the Findley Lake’s Christmas Through the Village event in December. Photo by David Prenatt

Melissa Lyon with Ivy, a Fresian-Tennessee Walker, at the Laff ‘n’ Lyon ranch in Sherman. Photo by David Prenatt 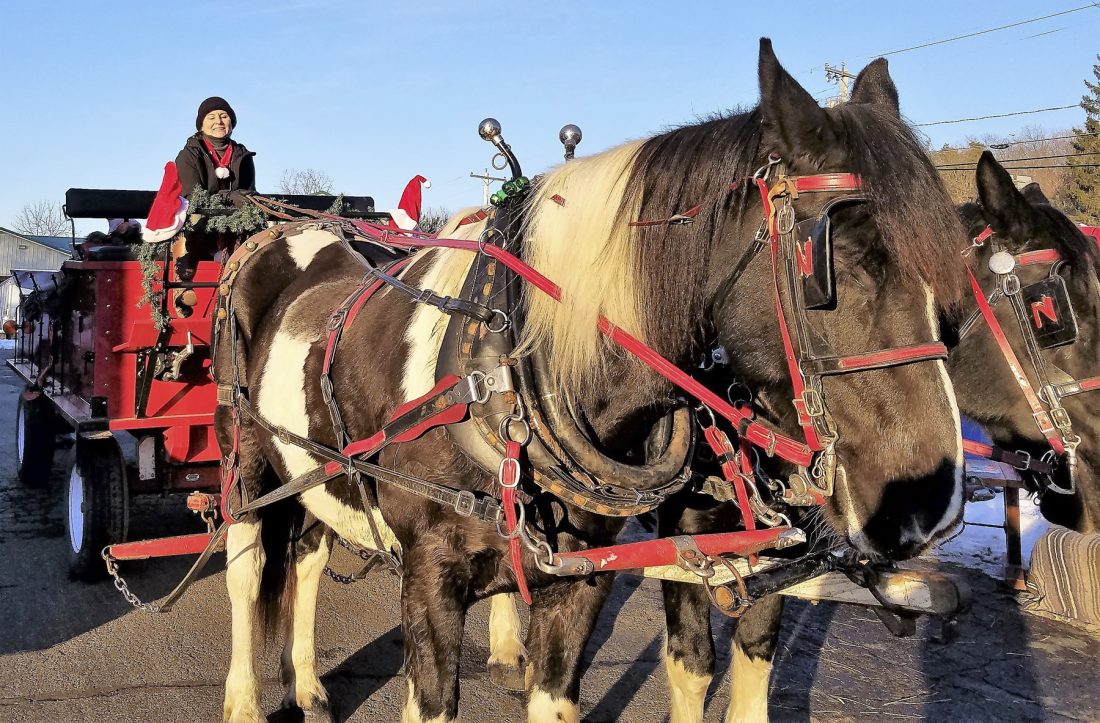 Melissa Lyon with spotted draft horses Sam and Susie during the Findley Lake's Christmas Through the Village event in December. Photo by David Prenatt

SHERMAN — Aaron and Melissa Lyon, owners of the Laff ‘n’ Lyon Ranch in Sherman, have recently begun offering horse-drawn wagon rides for public and private affairs. But their real work lies in developing the connection between human and horse.

“I think horses are one of those animals that are incredibly sensitive to human emotions,” Melissa Lyon said. “Every day I learn something new from them. Every day, they teach me something new.”

While the Laff ‘n’ Lyon has operated as a horse ranch for five years, it only incorporated as a public business in 2019. The couple offers wagon rides for private events such as birthday parties and family gatherings and is also available for more public venues, such as Findley Lake’s Christmas through the Village.

“We just went with a soft launch,” Melissa Lyon said. “We have a 60 mile or less travel radius.”

Nonetheless, the Laff ‘n’ Lyon Ranch is a work in progress, following a plan. 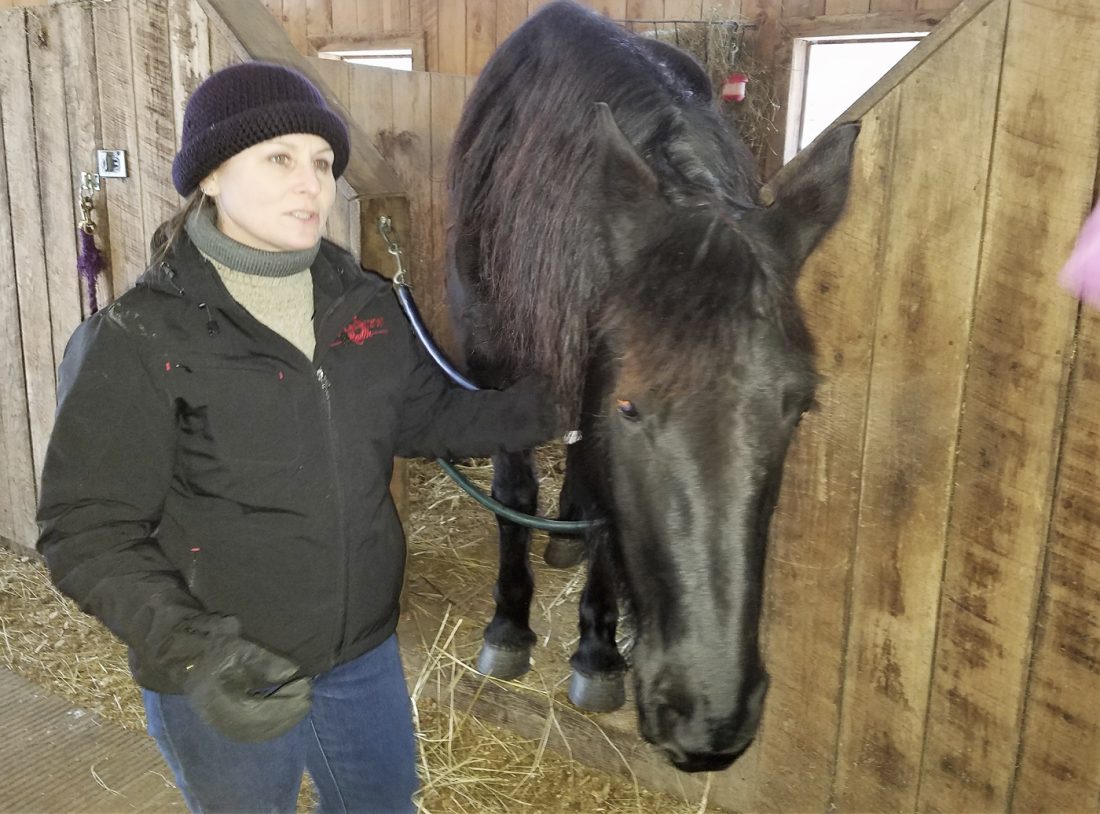 Melissa Lyon with Ivy, a Fresian-Tennessee Walker, at the Laff ‘n’ Lyon ranch in Sherman. Photo by David Prenatt

Five years from now, the couple hopes to offer services at their farm whereby people can stay there and either take part in the farm life and work, or just enjoy the experience of the ranch.

The ranch is not at the point of being self-sustaining, Melissa Lyon said, and both she and Aaron have full-time jobs. Melissa is director of the Erie County Department of Health in Erie, Pa. However, she says it is her connection with the horses that enables her to carry out her duties.

” I couldn’t do my professional work without the horses in my life,” she said.

One only needs to visit the Laff ‘n’ Lyon Ranch to understand what she means. Every one of the couple’s horses, whether a giant draft horse or a riding horse, or even a miniature, exudes a gentle, curious spirit.

“I always buy for temperament,” Melissa said. For instance, she said, when she purchased Reese, a quarter-horse, “I was able to just walk into the stall.”

Melissa Lyon has been riding horses since the age of 5, but she said it was Aaron who really wanted to learn to drive horses hitched to a wagon. “We tried to do it on our own, but we did not know what we were doing,” she said.

The problem lay in the fact that they were harnessing Kate to the wagon improperly, Melissa Lyon said. “Once we realized that it was us and not the horse, we set out to find a driving school,” she said.

Their answer came in the form of an Amish man, Alvin Yoder, who operated a horse driving school in Holmes County, Ohio. “He was the most patient, gentle person I’ve ever met,” Melissa Lyon said. “He is the reason for our success today.”

Alvin Yoder has since passed away, but before he did, the couple purchased Suzie and Sam, brother and sister draft horses, from him. They are two spotted draft horses who sport a black and red harness and pull a matching red pioneer wagon.

Melissa Lyon said the couple follows a methodology known as natural horsemanship in which one works with the horse, rather than trying to dominate it.

“It’s less about brawn with a horse,” she said. “It’s about patience, gentleness, and cooperation.”