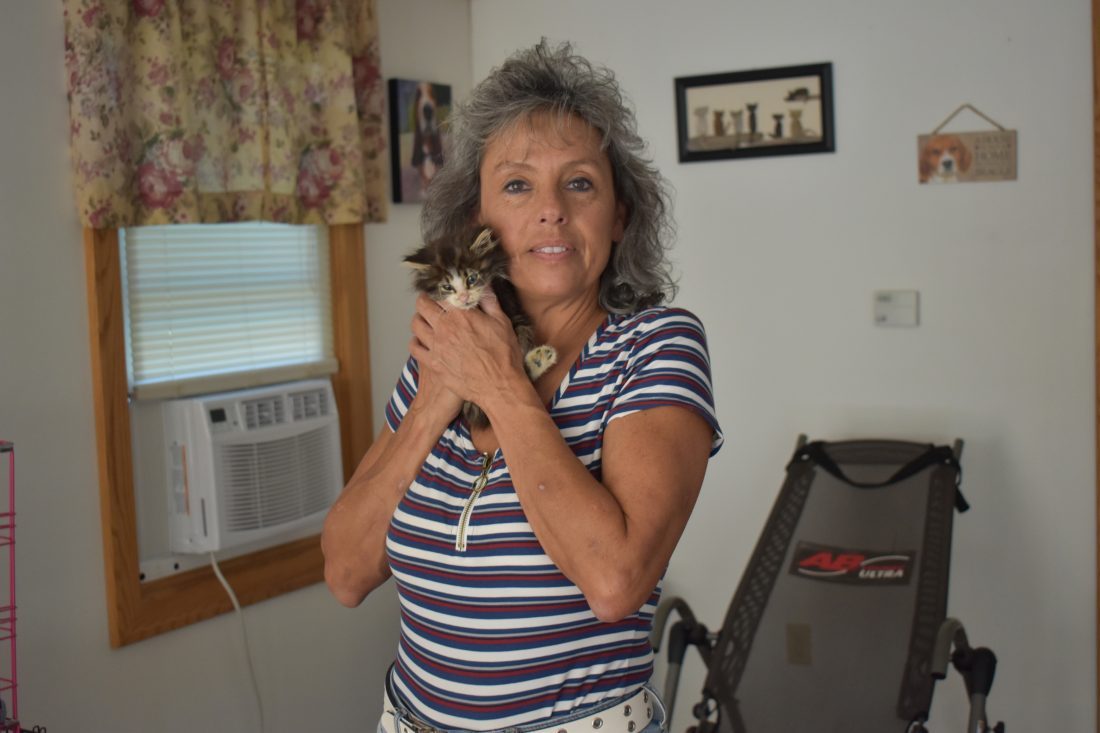 A Falconer resident and the village of Falconer came to an agreement that will allow her to keep her pets while she attempts to sell her home. Pictured is Brenda Goodwill with one of her 10 cats that she rescued and refused to give up after village officials issued a summons in June 2019, finding the Goodwill in violation of a local code on harboring animals. P-J file photo

FALCONER — A Falconer woman said she plans to sell her home in order to keep her 10 cats and two dogs she considers to be like her “children.”

Brenda Goodwill, who is in violation of a village of Falconer code regarding a limit on household pets, agreed to terms with village officials while she attempts to sell her home.

Goodwill, who is representing herself, appeared in Ellicott Town Court in front of Town Justice Marilyn Gerace regarding the violation of the village code that stipulates any resident cannot own more than two dogs and two cats without a special use permit.

Goodwill and Greg Peterson, village attorney, agreed to conditions to allow the Falconer resident to keep her 12 pets while she attempts to sell her house with the understanding that the current violation will be dismissed.

Additionally, Goodwill must show proof she has entered into a contract with a potential buyer within 90 days. Gerace ruled in favor of an adjournment in contemplation of dismissal, or an ACD, that will effectively see the village drop the violation if Goodwill sells her house and follows the village’s conditions after no alternative agreement could be reached.

“I’m not happy with it,” Goodwill told The Post-Journal. “I don’t think it should have come to this.”

Goodwill is known locally for rescuing community cats and finding them homes. She also traps feral animals and has many spayed or neutered before finding them places to live.

The village issued a summons in June for violating village code on harboring animals.

At an Aug. 12 Falconer Village Board meeting, village trustees voted to deny a special use permit request from Goodwill that would allow her to exceed the allotted number of cats written in the code.

After a recent meeting and subsequent phone calls between both parties, Peterson submitted by email an official proposal to Goodwill, which was then entered into record at Tuesday’s court proceeding.

The proposal is as follows,

¯Goodwill shows proof of a contract on 33 Park Ave. within 90 days;

¯Goodwill will not add any more pets to the animals currently in her house with no additions or replacements;

¯Goodwill will otherwise comply with all the regulation set forth in the Village of Falconer Code Chapter 48.

Following discussion among Goodwill, Gerace and Peterson, both parties agreed to the terms. During the discussion Goodwill criticized the code and said, “I just want to save my cats and I want to keep my pets.”

There will be a “status check” by May 19 to ensure Goodwill is abiding by the agreed upon conditions. Gerace told both parties to remain in contact, adding that “communication is the greatest thing.”

“There should be special things (in the code) for people that are trying to do right,” Goodwill said following court. “I didn’t expect to sell my house.”

Goodwill said she intends to sell her house, or at least enter into a contract with a buyer within 90 days, with the intention to relocate to a different municipality that does not have the code she violated in Falconer. During court, Goodwill said to Gerace she was unaware of the code before purchasing her home.

“I’m going to continue to rescue and be an animal lover,” Goodwill said of her future plans.