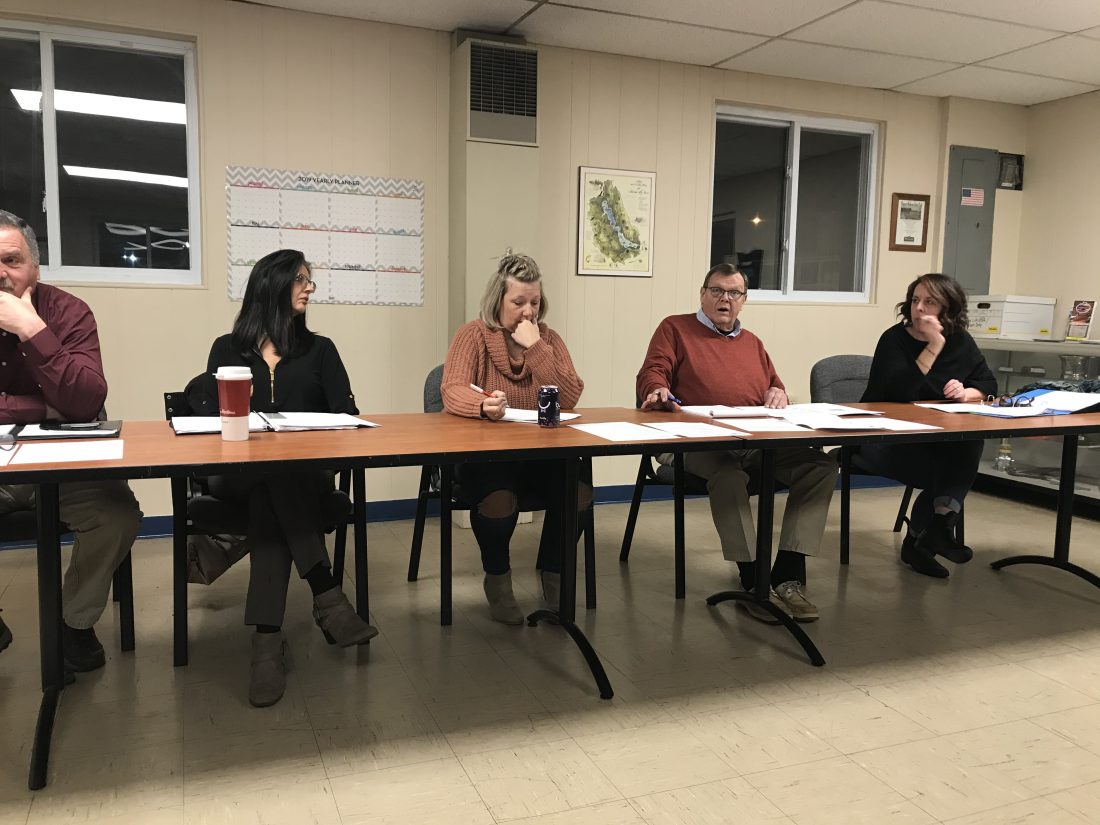 The Bemus Point village board issued a resolution of commemoration to honor the 100th anniversary of the Bemus Point Volunteer Fire Department on Tuesday. P-J photo by Jay Young

BEMUS POINT — Feb. 27 will mark the 100-year anniversary of the Bemus Point Volunteer Fire Department. Mayor Bryan Dahlberg and the village board issued a resolution of commemoration to celebrate the occasion, taking time to list the founding members of the department along with original chief Allen Russ.

“Whereas the Bemus Point Fire Company has served the Village of Bemus Point and the surrounding community for the last 100 years, now therefor it be resolved that the board commemorate the 100th anniversary,” Dahlberg said.

Current Chief Randy Apperson briefed the board on recent department activity, noting that there have been 27 calls this year including four motor vehicle accidents.

County Legislature Chairman Pierre Chagnon briefed the board on several recent issues at the county level, and noted that he will also deliver a similar resolution of commemoration to the legislature regarding the fire department anniversary in the near future.

“We held public hearings and approved fixed base operator and hangar lease agreements with Centric Aviation at both the Jamestown and Dunkirk airports,” Chagnon said. “We appointed Ken Lawton as Chautauqua County Legislature for District 10 in the southwestern portion of Jamestown, all of Lakewood and part of the town of Busti. Replacing our new county executive PJ Wendel.”

Chagnon said that $10,000 was allocated toward the development of a strategic business plan for the portion of the Chadakoin River from McCrea Point downstream to Warner Dam.

Various local departments and agencies will contribute to the $60,000 total cost.

“The plan involves both water quality and tourism development components, and will establish the groundwork for guiding the ultimate activation of the Chadakoin River for greater public use,” Chagnon said.

In other business, Bemus Point Business Association Executive Director Kelley Marker briefed the board on planning for upcoming events.

First on the calendar is Bemus Is Blooming, which was formerly known as Spring Fest.

“It is just a big open house house kick-off, beginning of May,” Marker said.

Also on the calendar are a sidewalk sale, Fourth of July celebration, tropical-themed Lake Days with a celebration of the fire department anniversary, Fall Fest on Sept. 19-20, and a Holiday Open House.

The village once again hopes to put on a Fourth of July fireworks display after getting positive responses from last year’s event.

Dahlberg noted that the budget is nearing completion, and mentioned that there will be a meeting of the Chautauqua Lake Protection and Rehabilitation Agency at Bemus Point Methodist Church on March 4, from 3-5 p.m.

Next month’s village board meeting will be moved to March 24 due to scheduling conflicts.

The board also addressed the topic of potentially extending the contract already in place for ownership of the Village Casino. Dahlberg explained that after previous construction efforts to make the building handicap accessible, the owners are now hoping to install heating, ventilation and air conditioning systems as well.

Extending the contract would allow the owners more time in the future to recoup their investments in the property. The board expects to make a decision soon.