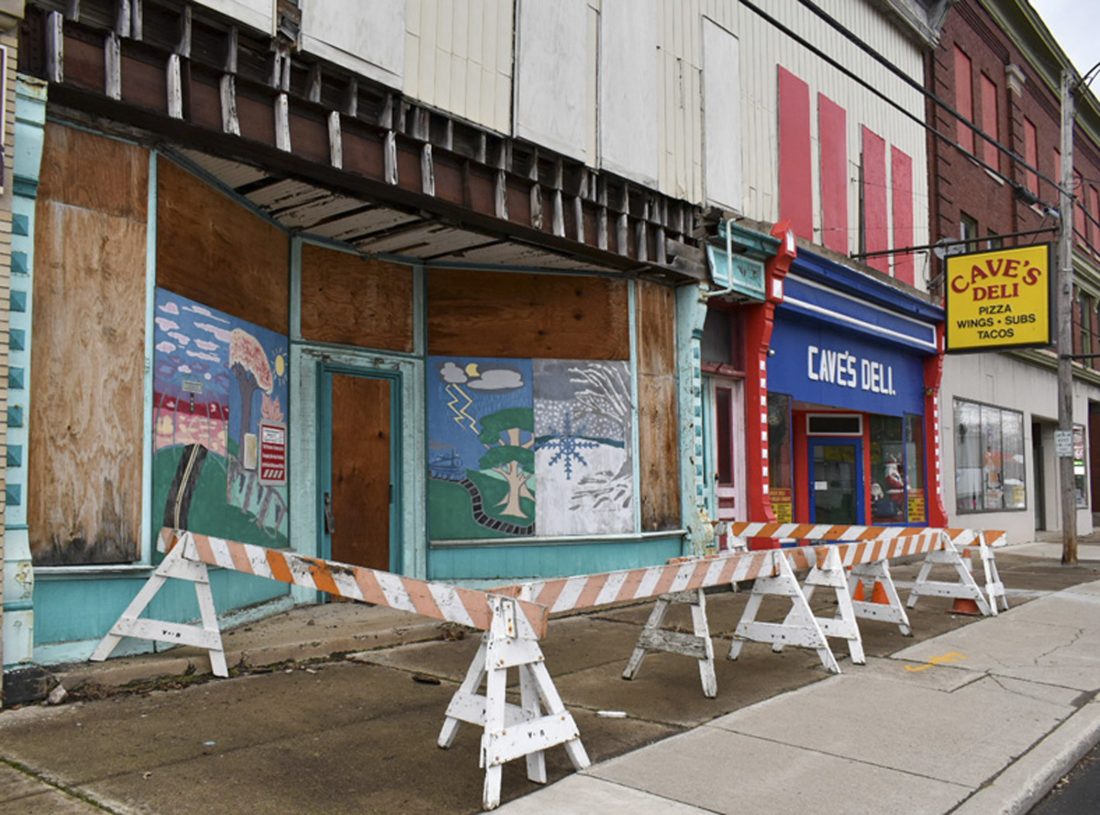 BROCTON — The village is buying the building that houses Cave’s Deli and will have it torn down.

The Brocton Village Board held an executive session before its meeting last week to discuss the matter, taking 30 minutes to discuss the pros and cons. Then, at the end of the regular session, village attorney Peter Clark announced that the village will be buying the property that currently houses Cave’s.

“It’s a dangerous condition, as you all know,” Clark said. “We would like to find a remedy. The least expensive way to remedy the building is for the village to buy the property. Once the village owns it, then the Land Bank will get involved and tear down both of the buildings. They will cover the cost of that, which is around $200,000.”

The property, located at 14 E. Main St., is being bought by the village for $67,000. Up until now, the owners have denied all offers from the village. The Chautauqua County Land Bank has been recommending the demolition of this building for years, so they decided to take the cost of demolition in their own hands.

To give the owners some leeway and time to sell their inventory, they have been given until March 13. Then, the building will be condemned and demolished.

“If the building isn’t demolished, somebody is going to get hurt or something is going to happen and it’s certainly not a good look for the village to have,” Clark said. “At the end, the Land Bank will tear it down and then we will get the property back. It will be nice and cleaned up and we can develop the property.”

The village has been trying to work on the Cave’s case for many years, going back all the way to 2010. In 2016, the Chautauqua County Land Bank informed the village it would not be taking over the proposed demolition of 10 E. Main St. unless both 10 E. Main and adjacent property (which houses Cave’s Deli) would be torn down together. The mayor and board members worried about what a winter with heavy ice or snow would do to the already crumbled building’s structure back in 2016, now worrying about it even more in 2020.

Last year, the land bank sent a letter to the village.

“It is our continued recommendation that the village should condemn the entire building, post it unsafe for occupancy, and acquire site control of 14 E. Main St., either through negotiated relocation with the property owner, purchase of the property at market value from the market owner, or through eminent domain,” Chautauqua County Land Bank Executive Director Gina Paradis wrote in a letter to Brocton Mayor Richard Frost on March 21, 2019.

The property, part of the building that the village deems unsafe, is owned by Tim and Karen Cave. Paradis noted in her letter that even though the land bank had pledged money to the village to assist in demolition of the building, the entire structure must be under the control of municipal entities first. 10 E. Main St. is already owned by the county. This is the reason for the village buying the building.

In 2016, an assessment of the building was done for the village by Buffalo engineers Nussbaumer & Clarke, Inc. The report found 14 E. Main St. in better condition than its neighbor at 10 East Main, but warned that the wall the buildings share needs significant repairs. The portion at 14 East Main could be saved if 10 East Main is torn down, but “would require temporary supports during demolition and significant repairs once demolition is complete. This additional work would cause saving 14 E. Main St. more expensive than tearing it down,” the report stated.