The crowd was plentiful at the rally, even though it was so early in the morning. Photos by Natasha Matteliano

Todd Tranum and Rich Ryan spoke about how to vote and how the community needs to band together to win. 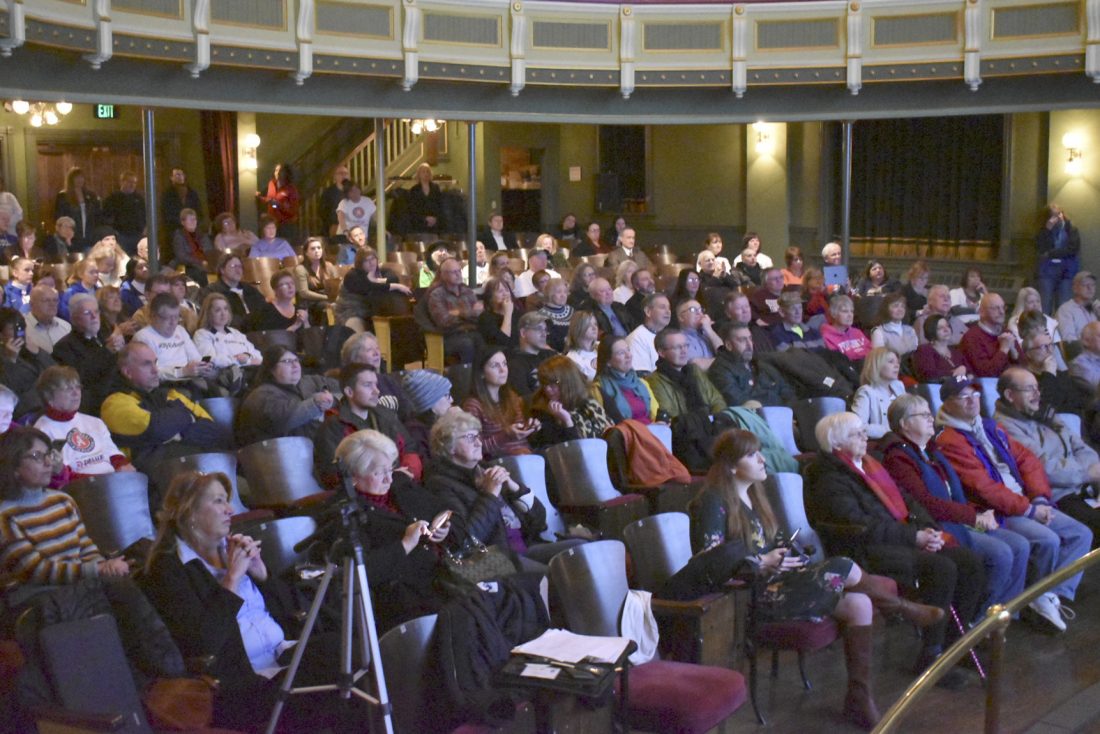 The crowd was plentiful at the rally, even though it was so early in the morning. Photos by Natasha Matteliano

FREDONIA — It is official.

The Small Business Revolution announced Tuesday morning that Fredonia was one of the top five communities to move ahead as the potential winner of the $500,000 and a season of the show dedicated to the town.

The rally at the 1891 Fredonia Opera House & Performing Arts Center started off at 6:30 a.m., with cheerleaders from the State University of New York at Fredonia gearing up the crowd to get ready for the announcement. The crowd of about 250 community members was yelling with the cheerleaders “Fredonia!”

“Good morning everybody, I’m excited, I hope you are too!” said Fredonia’s new Mayor Doug Essek in his speech before the big reveal. “This has brought everybody together, excited everybody in our area. … Regardless of whether we win or lose, this has created such a unity in our community amongst our businesses, our community leaders and our communities.”

The community then watched the live feed from Facebook on The Small Business Revolution’s page, anxiously awaiting the announcement from Ty Pennington and Amanda Brinkman, co-hosts of the show. “This was the toughest part, picking the top five towns,” said Ty Pennington. “The great news is, the team really does go through everything about the town and we make sure that we can benefit the town the most.” 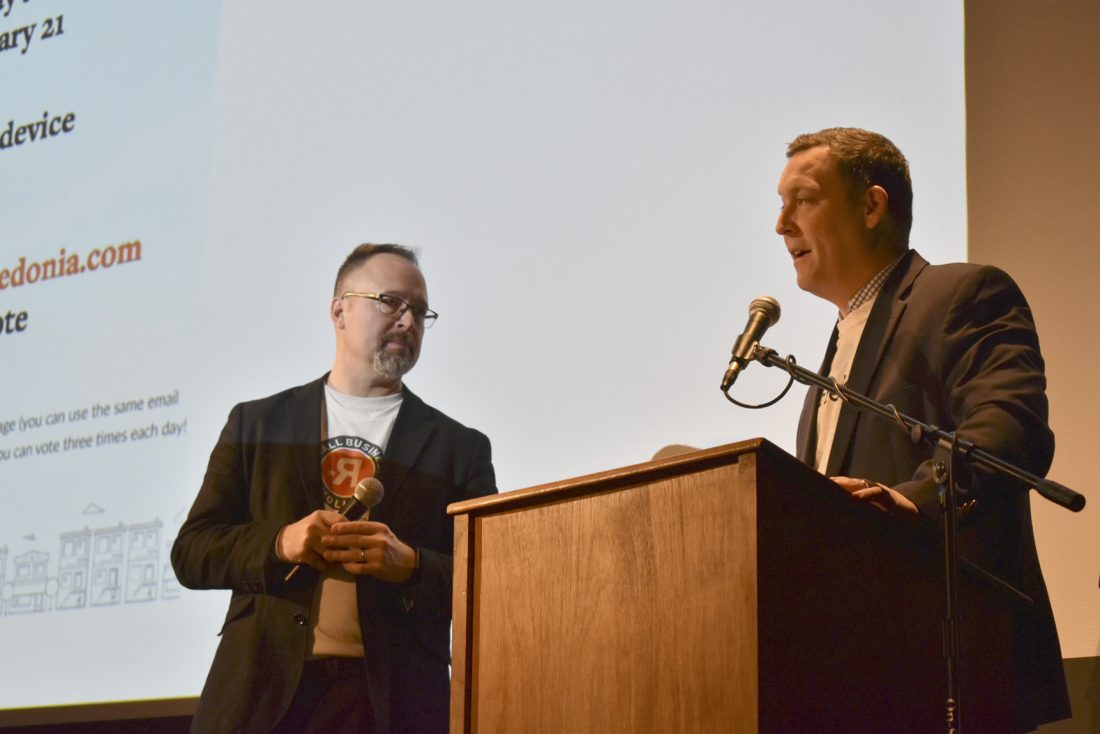 Todd Tranum and Rich Ryan spoke about how to vote and how the community needs to band together to win.

“All 10 of these communities were incredible. We’re really impressed with the businesses we met along the way and we made personal connections,” Brinkman said. “It was really about selecting the five towns that we feel would benefit the most from the Small Business Revolution process. “We’re really excited for these final five, go out and vote!”

As soon as Fredonia was named, the crowd erupted with cheers, screams and claps.

The cheerleaders started cheering again, “Here we go Fredonia!” On the live video put out on The Small Business Revolution’s Facebook page, the comments were flooded by Fredonians cheering the town on, such as “Yay! #myfredonia” “WOOHOO! We made it! #myfredonia”

Essek then spoke again, introducing Grace Czechowski, the person who made all of this excitement possible. Czechowski was the person who nominated Fredonia to be featured in the TV series. Essek thanked Czechowski on stage and presented her with a few gifts in honor of the town which including a huge bouquet of flowers and a key to Fredonia. “We wouldn’t be here if it wasn’t for this fantastic woman here who started this whole process in motion,” he said.

“There were 6,000 communities nominated, so this is huge for Fredonia to be in the top five. I’m loving seeing seeing the community rally around this and how it’s brought people together,” Czechowski said. “Whether we are number one or not, I think that this has been an incredible experience and a great way to stay connected to the Fredonia.

“I had been following the show for a couple years and I work at a non-profit organization. Amanda Brinkman did some volunteering with us, hosting some of our events. I had seen the opportunity to nominate small towns on her LinkedIn and I thought, why not Fredonia?” Czechowski said in an interview. “I grew up here and my mom was really involved in the community, which set a great example for my brother and I. I’ve worked with a ton of small businesses throughout my professional career, so I’m definitely passionate about it.”

Rich Ryan, the master of ceremonies then introduced Joe Gullo, Fredonia High School senior, to explain to the crowd how to vote. He started by having the crowd post on all their social media that Fredonia made it into the top five.

Gullo explained that people can vote once per day on every device they have. “Every vote counts,” said Gullo. He continued with saying that people can also go to votemyfredonia.com and also text MyFredonia to 31996. This will give everybody reminders about voting and gets you in the sweepstakes to win various prizes from the town.

There are many prizes available for voters, including Buffalo Bills’ tickets, Buffalo Sabres tickets and various gift cards from the small businesses in Fredonia. “Thank you all for coming and let’s win this Small Business Revolution!” said Gullo, concluding.

Lt. Gov. Kathy Hochul was even in a video presentation to support Fredonia in their venture, which was featured at the rally. In the video, she explains the process of the show and congratulates Fredonia on their efforts thus far. She also encourages all of Western New York to vote for Fredonia.

“This Chautauqua County village, home to about 10,000 people and the SUNY Fredonia campus, has many economic development projects underway. The Small Business Revolution is ready to help make Fredonia the best it can be. Together, we can make this next step happen. It’ll be great, not just for Fredonia, but all of Western New York.” said Hochul.

Essek then spoke again at the rally, congratulating and thanking the community members for all their efforts to help get into the top 5. “We have seen the development of a complete new network of individuals who work tirelessly toward a common goal.” said Essek. “I am in total awe of the talents that have gotten us to this point. There’s so much to be thankful for. We have such a dedicated team and this dedication has gotten us to the top 5.”

Ryan then wound down the rally by having various small business owners in Fredonia speak of how they and the town could benefit from winning the grand prize and had the new County Executive PJ Wendel say a few words. Wendel thought back to a conference he went to years ago that had the theme of “great flames follow a tiny spark” and used that in his speech.

“Right now, we have a tiny spark and I know it’s going to grow into a great flame. What better place to see that great flame than on the shores of Lake Erie?” said Wendel. “This is a Chautauqua County effort. This isn’t north county, south county, this right now needs to be embraced by everybody.”

The rally then ended with Chautauqua County’s Chamber of Commerce p0resident and chief executive officer Todd Tranum telling the crowd how important it is to vote.

“What we need you to do is vote every day on every device you can get your hands on. I want you to dig out your old iPhones and your old Samsungs,” he said. “We need you to vote every single day. We need you to call or text five friends you could connect with and also think of people outside of the area.”