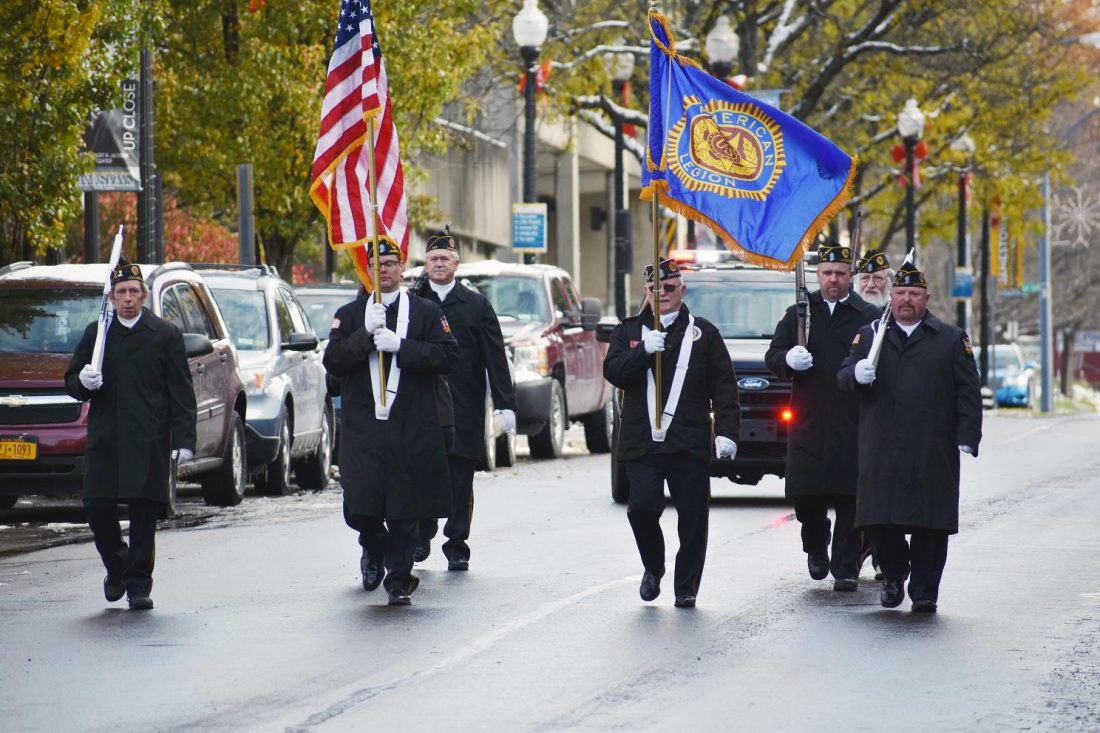 Veterans Day ceremonies in Jamestown will start at 10 a.m. at the Veterans Memorial Park, located along Logan Avenue and Third Street, which will be followed at 11 a.m. by the 21-gun salute on the corner of Third and Main streets. P-J photo by Jordan W. Patterson

There are several activities happening around the city on Veterans Day to honor all of those who have served in the U.S. military.

“People in the organization submit names, and we, as a group, get together and decided who should receive the money,” she said.

Also on Sunday starting at 1 p.m., the Blue Star Mothers of America Lake Erie-New York Chapter 4 will host its “Blue Wing Fest” at the Lakewood Rod & Gun Club, said Susan Rowley, chapter president. She said there will be a hang glider and basket raffles, along with a Chinese auction. The football game featuring the Buffalo Bills and the Cleveland Browns versus will be shown on the big-screen TV. Tickets are $10.

Rowley said the proceeds will go toward the Christmas care packages the Blue Star Mothers send troops overseas. The Blue Star Mothers and volunteers will meet at 9 a.m. Saturday, Dec. 7, at the Fluvanna Community Church, located at 3363 Fluvanna Ave., Jamestown, to pack the care parcels. The public is welcome to attend. For more information, visit bluestarmotherswny.org.

Following the park service, at 11 a.m. the American Legion will host a 21-gun salute at the corner of Third and Main streets. The Jamestown High School Marching Band, led by Meghan Murray, will also play “The Star Spangled Banner” and buglers will play “Taps.”

Shortly following the service at the corner of Third and North Main streets, there will be a ceremony held at St. Luke’s Episcopal Church, located at 410 N. Main St., Jamestown.

“St. Luke’s has held the annual Veterans Day service as long as anyone here can remember,” said the Rev. Luke Fodor, St. Luke’s rector. “We especially remember all who gave their lives in the defense of our nation. We offer our appreciation to the members of the Ira Lou Spring Post 149 in sponsoring this Veterans Day service and are proud to join them in offering it to our community.”

Following the church service, there will be a ceremony at Soldier’s Circle at Lake View Cemetery.