You Can Find Pieces Of History In Maps 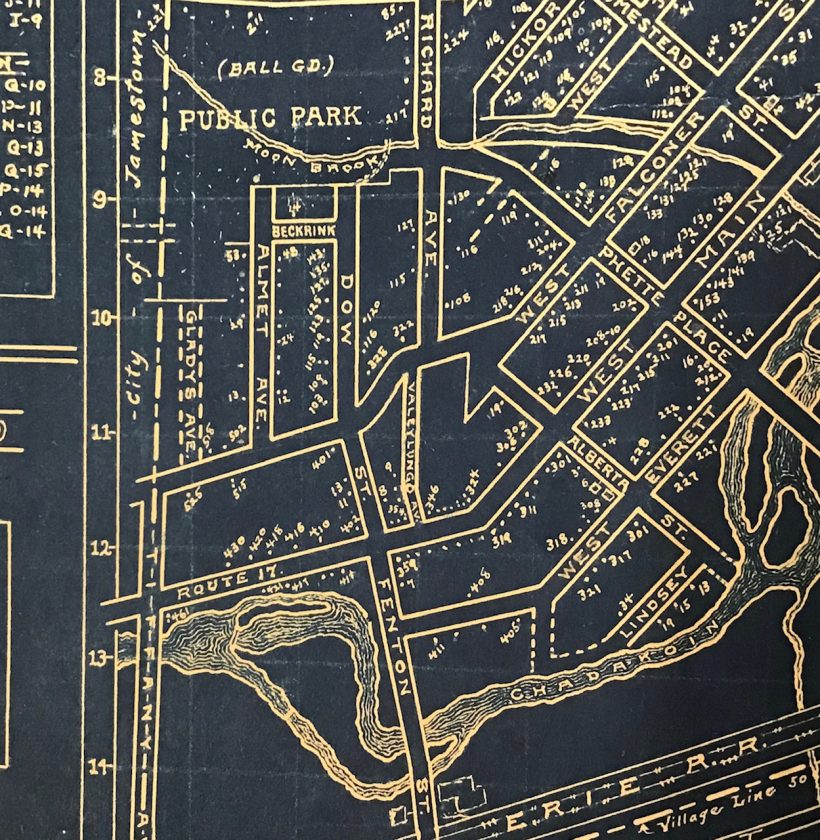 The southwest corner of the A. N. Goldfinch map of the village of Falconer. Richard Avenue is in the center of this picture and the lower continuation of it was, at the time of the map, named Valeylungo. Vallelunga, a village in Sicily, had been home to some of the immigrant families living in Falconer. Submitted photo

As some readers may realize, I like maps. Road maps can show one how to get from one place to another, either on a direct route or on a scenic route with many interesting stopping points along the way.

Topographical maps show you the terrain of an area, so you know if you will encounter rivers or lakes, mountains or plains. Older maps may show you what was there in a certain time period. Looking through a file in the Historians Office in the town of Ellicott, I discovered a map-one of those blue maps, with the writing and roads in white, that were popular a number of decades ago. This map was of the village of Falconer. There was no date but the person credited with producing the map was A. N. Goldsmith, Corry, Pa. A. N. Goldsmith is most likely Archie Noah Goldsmith, born May of 1873 in Corry. His name appears on other maps of a similar style. The maps appear to have been produced in the early decades of the 1900s.

Now back to the map of the village of Falconer. It is titled Souvenir Pocket Map of Falconer, N.Y. Like other Goldfinch maps, this one has a place for a small photograph to be affixed but there is no photograph nor can I tell if there ever was one. There is a street index and a short history of Falconer. Some streets are only dashed lines, some with names and others nameless. A check of a modern map or Google Earth could tell us if those streets were ever finished and exist today. The Show Grounds, Falconer Air Port and the Athletic Field by the High School are labeled but do fall outside the Village Line. Along the streets are small dots which I assume indicate houses or a structure of some type. Many have numbers which seem to go along like house numbers on each street.

I must admit that there are a few street names that are not familiar to me but I have not explored every corner of Falconer. Then you start wondering why streets are named what they are named. Who were Grace, Filipa, Pearl, James, Arthur, Harold, Ralph, Gladys, and Richard and why are streets named for them? Were there hickory trees on Hickory Street? When did Fenton Street change to South Dow Street? Street names can produce many questions.

One other street name did jump out at me as I was reading street names. Although it is spelled Valeylungo on this map, I would think that the real spelling was Vallelunga. Because of the genealogy I have done, I recognized it as the name of a village in Sicily from which a number of the early Italian families in Falconer had come. There were three houses indicated along that street. They are probably the same three houses which are along the west side of that street today. Some readers are now trying to figure out just where in Falconer is that street. At some point in history that name was dropped and the street is now the extension of Richard Avenue that is between Falconer Street and West Main Street (Route 394). It is likely that those three houses were built by or at least occupied by immigrant families from Vallelunga. Vallelunga is within 100 kilometers of Palermo, Sicily and not too far from San Cataldo, Marianopoli, Serradifalco, and Mussomeli, also villages which provided a number of immigrant families to the Jamestown area.

Street names on maps can often provide clues to people who lived on those streets. Maps from different time periods can indicate changes either in names or in the path a street follows. Take a moment and think if any of the streets you were familiar with though out your life had changed names. According to the 1940 U.S. census my family lived on Pine Ridge Road in Busti, without moving they were living on the Busti-Lakewood Townline Road during my childhood and continuing to live in the same house, lived on Southwestern Drive during my high school years and later.