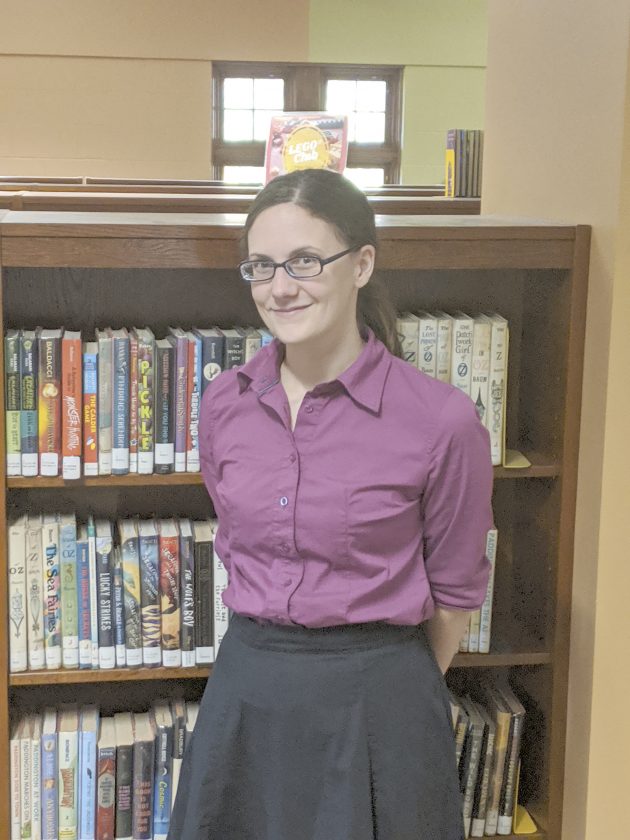 Taylor had worked at the library for two years and was picked among several other candidates.

“I love this library and the community,” Taylor said. “I want to help make it a more unified community, and just continue the progress it’s already made.”

She has a master’s degree in library and information science from the University of South Florida and a bachelor’s degree in English literature and writing from Indiana University. She obtained her undergraduate degree in 2011 and finished in 2016.

“I get to continue that education by working with the library,” Taylor said.

Taylor said she loves to read medieval literature, such as “Beowulf,” and one of her favorite authors is J. R. R. Tolkien. She has been working with books and writing much of her life. Taylor said she wants to expand her repertoire of books.

“I always focused on medieval and Renaissance literature,” she said. “I took a class on Tolkien and I just love his language. He’s such a talented linguist, and that’s an admirable skill. But to pick just one favorite — it’s impossible. I just love books.”

She said she has goals and ideas for the library, located at 12 W. Summit St. in Lakewood. Taylor said that includes surveys into what the community wants or needs, and to constantly update and talk with patrons.

“We’ve renovated some of the space and opened it up more,” Taylor said. “We’ve implemented some suggested ideas and we’re hoping to move the library forward.”

Some of the new programs for the library include a knitting and crochet club and story times. Taylor hopes to create a coding club, lessons in foreign languages and offer tutoring, as well as working with Southwestern and the school librarians. The library will also be participating in the “Christmas in the Village” event.

In October, the library had trick-or-treating and other Halloween events. In December, Taylor is planning some holiday stories.

Taylor said the community is what makes the library special. She’s looking forward to seeing it grow in the future. Keeping the library relevant, she said, includes blending old ideas and programs with the new.

“(The library) is just a building,” she said. “But it’s what the people make with it that makes it so special.”