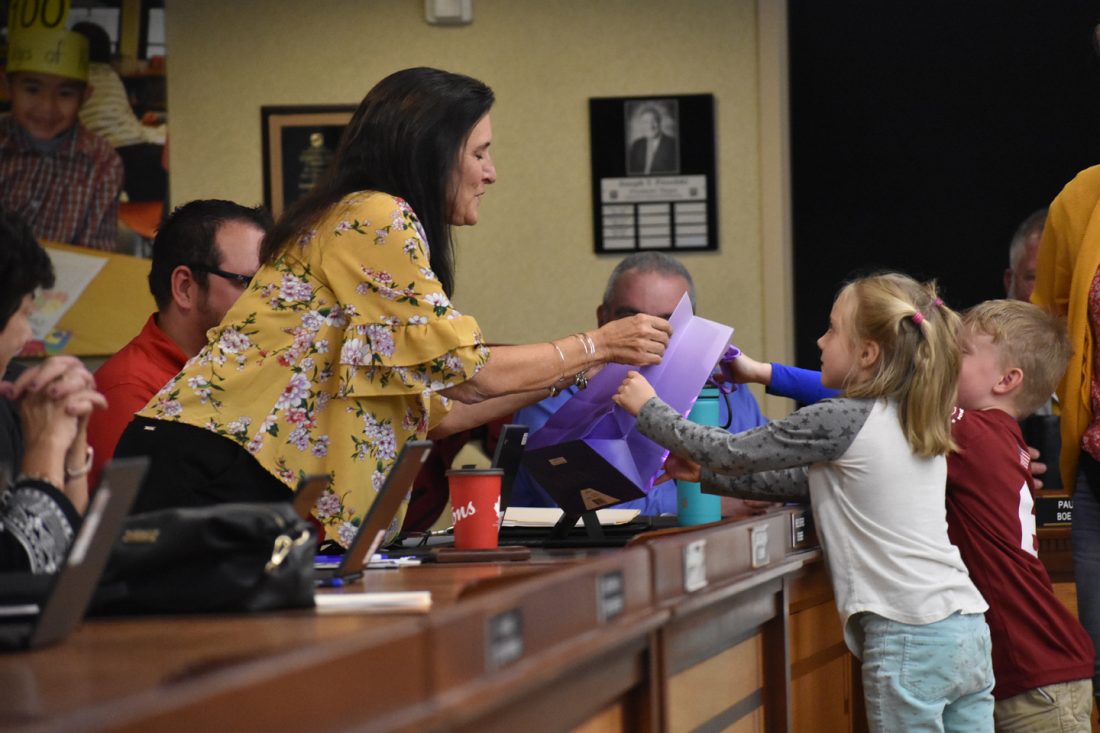 The Jamestown Public Schools District celebrated its board members at a recent meeting. JPS students from different school buildings presented gifts to board members as a token of appreciation. Pictured is Shelly Leathers, board member, receiving a donated book from Jamestown students. P-J photo by Jordan W. Patterson

At Tuesday’s regular meeting, the Jamestown School Board of Education was honored in association with the New York State School Boards Association’s Board Recognition Week. Apthorpe cited James Prendergast, the founder of Jamestown, as creating the first school in the Jamestown area. Additionally, Prendergast gathered local stakeholders to represent and manage that school.

“Those community stakeholders were actually the first board of education,” Apthorpe said.

The superintendent praised efforts of current board members, emphasizing that their actions are all on a volunteer basis.

Board members were gifted books that were donated in their name to the school district. The books were presented to board members by JPS students who represented each school within the district.

In other news, the board approved new tenured employees and heard a presentation from Jessie Joy, JPS chief information officer, about an application the district uses to track attendance and other forms of information.

Joy presented to the board Schoolzilla, software she described as a “data dashboard.” Joy used the example of student attendance and chronic absenteeism to showcase the program. The district has been using Schoolzilla for about a year.

Likening the system to a car dashboard, Joy said the application can help district officials become aware of areas in need of attention.

“What my dashboard is telling me is that one of the systems that I’m expecting to be functioning at its highest level is not operating as it should,” Joy said.

Noting that the data dashboard is similar to that of a car’s system, Joy said the Schoolzilla application can help school officials address areas of need much sooner. At Tuesday’s meeting, board members analyzed student attendance that was at an average of 93.5% of all students who attended school to date. This percentage was short of the district’s goal of 94.5%. However, the district’s chronic absenteeism rate of 25.1% was within its districtwide goal, scoring lower than 26%. The district goals were set in alignment with the state’s Every Student Succeeds Act (ESSA) standards.

Students are considered chronically absent if they miss more than 10% of school days they were enrolled in a school district.

“We can monitor that very early and very often,” Joy said of identifying students who are chronically absent and studying ongoing trends as it relates to attendance.

Represented by Katie Russo, Lincoln Elementary School principal, Jessica Dockwiller was approved for tenure as an elementary teacher at Lincoln.