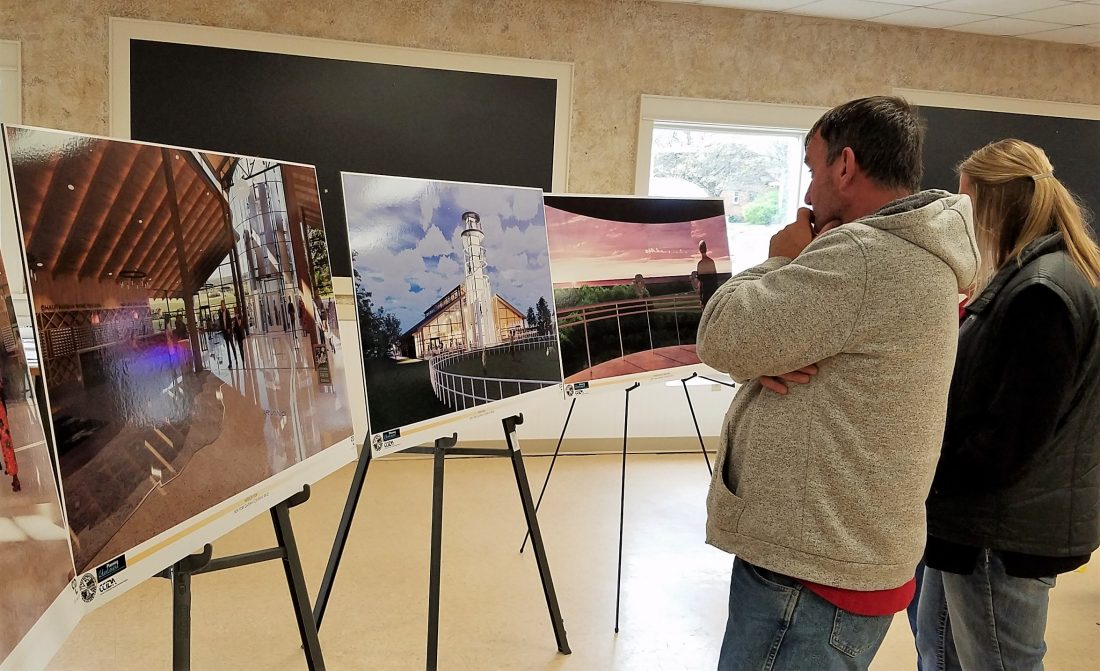 On Friday, county and local officials unveiled plans for a proposed gateway center off Interstate 90 in Ripley. “The gateway center is designed to get people to leave the thruway,” Ripley Supervisor Doug Bowen said. Photo by David Prenatt

RIPLEY — County officials unveiled plans for a proposed gateway center to be located off Interstate 90 in Ripley at a special meeting Friday.

County Executive George Borello introduced the plan to the public in Meeder’s Restaurant on Main Street in Ripley. The plan is the result of a feasibility study conducted by the county executive, county Division of Economic Development, the county Industrial Development Agency, the town of Ripley, the county Visitors Bureau and other stakeholders.

“This started out as something we’ve needed for far too long, The entrance from the west is shameful,” Borello said. “This is about representing the state as it should be represented. The flavor that you will see at this center will represent us. That’s the goal; that’s the vision.”

Borello stressed that the proposed center is “not just a rest stop.” There is a dedicated effort to make this a destination spot, a true place of commerce, activity and community involvement, he said. “This is about who we are here in Chautauqua County in Western New York.”

Ripley Supervisor Doug Bowen said he is excited about this plan because, unlike past studies, this one ties in the concept of economic development.

“I call this a gateway study with a twist,” he said. “This is not just a rest stop. The economic aspect of this is what excites me.”

Bowen said the real purpose of the center is not just to get people to come off the thruway, but to inspire them to explore the region.

Borello described how, when he first took office, he came up with a sketch of what he thought the gateway center might look like. He took the sketch to the architectural engineering firm, Clark, Patterson, Lee.

Michael Mistriner, vice-president of CPL said the firm then involved the marketing analysis company RKG to assist in deciding what would be included in this center. “We wanted something different, more of a destination that would bring people into the area,” Mistriner said. “And it really did start with George’s sketch.”

Mistriner then reviewed all of the possible aspects of the center.

The proposed center will include an information hub, a public market, long walls on which to display local art work, a floor representing the Lake Erie shoreline, a community room, an arcade for the younger kids, a performance space, and a retail and stakeholder space to showcase local products.

The center will also feature a chef’s station and dining area with the ability to sit outside and eat while taking advantage of the weather. There will be a wine exhibition with samples and wine sales, and a large dog park is planned right next to the gateway building, Mistriner said.

The center would also incorporate a lot of glass to use natural lighting and give the impression of transparency, Mistriner said.

Instead, the center is designed to reflect local architecture, Mistriner said. The focal point of the complex will be an observation tower at the far end. This tower was modeled after both a lighthouse and a grain tower, he said. “The tower will give visitors a view of the surrounding area,” he added.

Town Councilman John Hamels questioned who would own the facility. Borello responded that he hopes the center will expand to become a campus.

“We will seek funding from various sources,” he said. “Technically, it will be its own entity. It will come about from the support of the entire community.”

Mistriner said there are two possible locations under consideration at this point. He estimated that it would be located on about 15 acres of ground.

However, Borello noted that the project is still at the first step. “We did this so people can visualize that we have a path to make this successful,” he said. “We are here to say that this is something that will be transformational.”