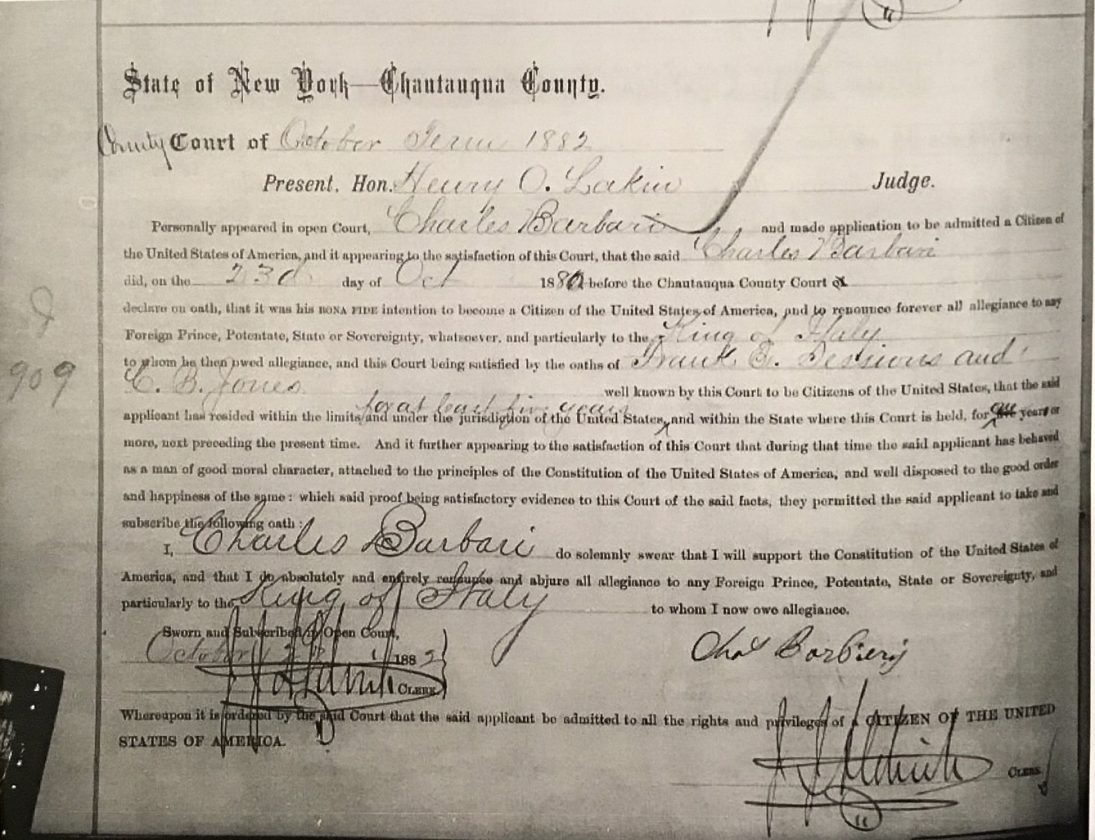 The final papers for Charles Barbieri to become a naturalized citizen of the United States of America on October 23, 1882 giving up allegiance to the King of Italy. From the Chautauqua County Court, October Term 1882.

While reading some articles in the local newspaper of the early 1880s, I found mention of Mr. Barbieri, an Italian. According to local history the Bottini family was the first Italian family in Jamestown but they did not arrive until the late 1880s. So that prompted a search for more information about Mr. Barbieri. I found more articles and expanded the search to other research sources.

Charles Barbieri and his wife, Julia, and a two month old son, were in Utica, New York for the 1875 New York state census. Charles and Julia were both born in Italy and they could both read and write Italian. By 1879 they were in Jamestown, as Charles Barbieri appears in the 1879 Jamestown city directory. His house was listed as Cherry near W. Fourth. The 1880 census shows that he, his wife Julia, and their 3 year old daughter, Jennie, plus some other relatives were living in the village of Jamestown, town of Ellicott. From this it appears that the son born in Utica in 1875 had died.

The newspaper had a number of articles that involved Charles Barbieri in one way or another. In October 1882, “A dog belonging to Charlie Barbieri, the Italian at the corner of Main and Third streets, was run over and killed by train 12 at the depot this afternoon.” In November 1882 is the notice that “On motion Charles Barber was given permission to build a cover over his peanut stand on the corner of Main and Third streets.”

Also in November 1882, Charles and Julia had an unexpected house guest. A man in an half-frozen state walked into Jamestown where he was found by the police. An interpreter was sent for and it was determined that he spoke Italian, had been robbed by someone in Warren, who then was thought to have headed to Jamestown. The man was taken to the Barbieri’s to be cared for and visited by a physician. That night “the frozen-footed Italian” became nearly crazy with pain and opened a window and escaped. He was found by an officer and returned. If he did not recover soon, Mr. Barbieri was going to send him to the county poor house. A few days later it was reported that “the Italian who had his feet frozen is recovering at the house of Charles Barbieri.”

During March 1883, a half frozen man was found in a bough hut in the Cheney woods in the town of Poland and eventually taken to the Barbieri home. No one had been able to speak with him as no one recognized the language he spoke. Barbieri tried talking with him in Italian and in French but neither language produced a response. The man was taken to the county home for care and people had concluded that maybe he was Polish. The doctor there said that the young man was certainly Italian but either did not want to talk to Barbieri or else “he spoke a provincial patois different from Barbieri’s.”

In January 1883, a notice in the newspaper reported that “Charlie Barbieri mourns the loss of an infant son.”

In the fall of1884, Barbieri advertised he wanted chestnuts and on October 31, it was reported that he had shipped 30 bushels of chestnuts to different parts of New York. Not much was reported about the Barbieris in 1884, 1885, and 1886. In May 1887 he had asked for a license to sell oranges and peanuts in the streets for 6 months. In July it was reported that there were two stands at Long Point-one of cigars and tobacco by M.V. Keene and one a fruit stand by Charles Barbieri. That is the last mention found of the Barbieris in the Jamestown newspapers.

But in February of 1887 there are the first two articles that mention the Bottinis. The first one announces that “The Jamestown electric light company, of which T. H. Smith is proprietor, has placed an arc electric lamp in the nut and fruit store of A. Bottini, No. 104 Main street.” Two days later, an article tells what is for sale in Bottini’s store and goes on to add “Mr. Bottini comes to this city from Newburg, N.Y., where he successfully conducted a store of a similar nature.” So we know about when the Bottinis arrived in Jamestown. And we can guess about when the Barbieris left Jamestown.

Additional research found the Barbieri family in California near San Francisco in the 1900 U. S. census with six additional children. The family continued to live in the area. Charles and Julia and four of their children are buried in the Holy Cross Cemetery, Colma, San Francisco County, California. Where in Italy they came from has not yet been determined. They are likely from northern Italy since most of the Italian immigrants of that time period came from northern Italy. That he could speak Italian and French is another indication that he may have come from the northern part of Italy which is close to France. More research to be done!