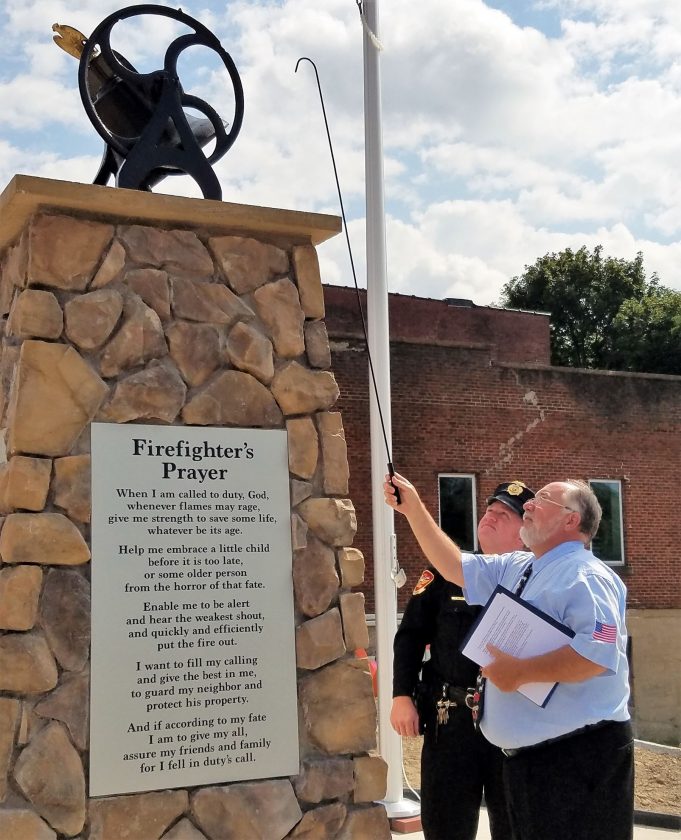 The bell atop the monument rang on Saturday afternoon, officially dedicating the First Responders Memorial in Westfield as Al Holbrook, President of the Westfield Volunteer Exempt Firemen’s Association, and Police Chief, Rob Genthner, together pulled the rope as part of the ceremony.

The front face of the four-sided stone monument on Portage Street, where the town’s first fire department had once stood, displays and image of the “caring hands”, one holding the badge of the Westfield Fire Department and one holding the badge of the Westfield Police Department. The remaining three sides bear inscriptions of the Police Prayer, the Firefighter’s Prayer, and the Westfield First Responders Tribute. “It is a four-sided memorial,” Holbrook said. “It is topped with a bell as a symbol of the call to duty.”

The First Responder Tribute, is a result of more than two years of planning by a dedicated committee of nearly 30 people, Holbrook said.

The groundbreaking ceremony, which also served as a kick-off for the official fundraising drive, took place in May. At that time, the First Responders Tribute Group had raised $10,000 of the estimated $45,000 needed to complete the project.

“I am extremely pleased to announce that as of noon yesterday, an excess of $36,000 has been raised toward our goal of $43,000 for the Tribute,” Holbrook said. He mentioned that donations toward the Tribute and the purchase of bricks will be on-going.

“It doesn’t end today,” he said. “Any funds raised over and above the cost will be used for future maintenance and upkeep.”

The dedication ceremony began with a parade, in which several dignitaries joined members of the police and fire departments.

Westfield Mayor Michael VandeVelde, who initially proposed the idea for the memorial on Sept. 8, 2016, read the proclamation which establishes the “first weekend in September as First Responders Tribute Weekend.”

Fire Department Chaplain Al Cody, began the dedication ceremony by remembering those who have acted as first responders since the founding of Westfield, and by expressing a hope for future generations to “take up the mantle of responsibility.”

Cody then prayed: “God of all hopefulness, we gather today in respectful tribute to those great ones of old who banded together, neighbor helping neighbor, to battle our common enemy, fire. We honor the constables and officers, guardians over the community in the often-lawless days of early America, and the hectic era of the coming of rural America.”

Following Cody’s invocation, Katrina Fuller read a letter on behalf of Congressman Tom Reed stating: “Our first Responders deserve every honor and laurel that we can provide them. They dedicate their lives to saving others and to helping those who need it most.” Reed went on to say that he looks forward to celebrating First Responders Tribute Weekend in the future.

State Assemblyman Andy Goodell then came forward and praised firefighters, saying, “they leave their families and they put their lives on the line for their neighbors.”

Goodell then spoke of the police. “Every day they go to work knowing they could face an unexpected emergency,” he said. “Thank you to all our first responders, thank God you’ve answered the call, and you are here for us.”

Chautauqua County Executive George Borello added, “this community has stepped forward to honor those people whose names we may never know, who act to save the lives of people that they did not know.”

Holbrook then introduced the members of the First Responders Tribute Committee and gratefully acknowledged the major contributors to the project. “This has been a labor of love and serves as an example of what good things can be accomplished when people and community come together.”

Holbrook described how the site will look when the project is completed. “Where I stand right now, you see a concrete circle; this will be filled with memorial bricks,” he said. “Around the outside of the circle will be grass, around the retaining wall will be a black wrought iron fence and through it, the steps leading down to the next level.”

The prayers on two sides of the monument were then read. Police Chief Genthner read the Police Prayer. Department member, Marsha Holland read the Firefighter’s Prayer. Town Supervisor, Martha Bills, read the tribute from the back of the monument just prior to the ringing of the bell.

Many others who were involved in the creation of the tribute were present for the dedication. Sue Poster of the Westfield Chamber of Commerce said they are pleased that Westfield has the tribute. “We’re happy to have this put here and to recognize our first responders who do so much, often while we are asleep in the middle of the night,” she said.

Tom Tarpley, spokesperson for the Fire Department of Westfield, said, “I think this really captured the essence of what Westfield is about. It is a reminder of the great people that live in this community.”

The ceremony was closed by Assembly of God pastor Vinny Sanzo. “This weighs over four tons. The foundation will keep it standing straight; otherwise we have a leaning tower of tribute.”

Sanzo went on to compare the stone foundations with “a foundation called love in every family and in the Westfield community….There is no greater love than to lay down one’s life for one’s friends,” Sanzo said, quoting John 15:13. “I am going to thank God for the love he’s put into this community.”