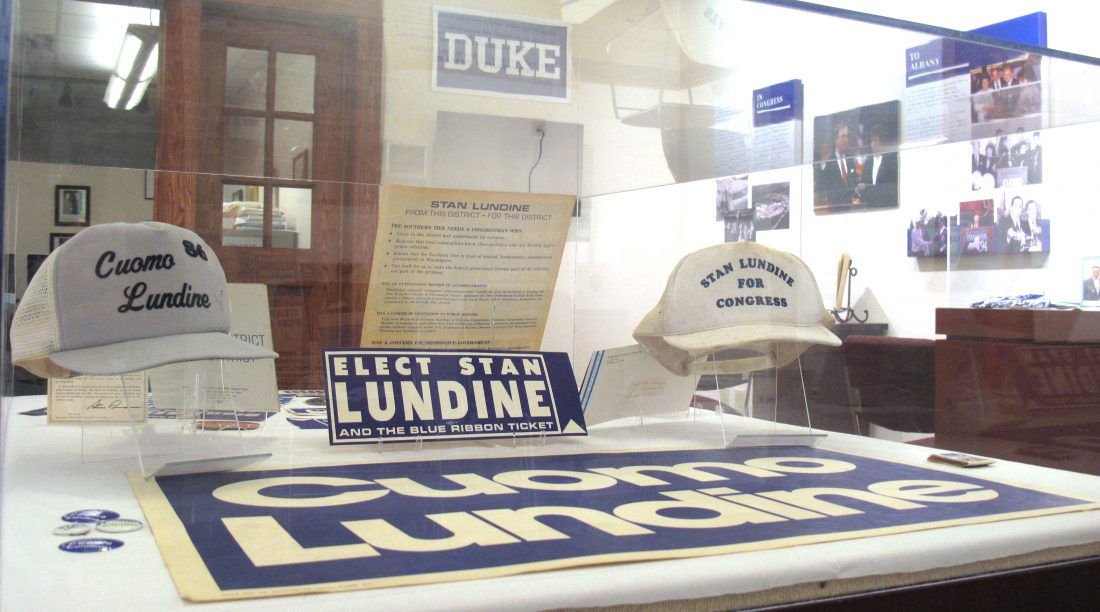 One of the displays of “Leading with Integrity & Innovation: Stan Lundine,” a new exhibit at the Jackson Center, located at 305 E. Fourth St., Jamestown. P-J photo by Dennis Phillips

A new exhibit is premiering at the Jackson Center to honor the career of a former Jamestown mayor, U.S. Congressman and lieutenant governor of New York.

On Sunday, “Leading with Integrity & Innovation: Stan Lundine,” will open to the public at the Jackson Center, which is also hosting a special event to honor the life and career of Lundine at 5:30 p.m. Sunday at its Carl M. Cappa Theatre. The event is free and open to all.

Ashlee Gray, Jackson Center intern and senior at St. Bonaventure University, created the exhibit and compiled interviews for a short documentary that will be shown at Sunday’s event. Gray said she heard at college that the Jackson Center was looking for an intern for the summer.

“They wanted someone to take the reigns on the project this year,” she said. “(Lundine) turns 80 years old and its the 50th anniversary of him being elected mayor.”

Gray said she is a native of Machias and didn’t know much about the history of the city or Lundine.

“Coming here I’ve learned quite a bit about Jamestown,” she said. “I didn’t even know who Stan was, but I’ve learned he is very important to Jamestown, to the Southern Tier and to the whole state of New York.”

The event Sunday will include remarks from family, friends and professionals who worked with Lundine or were influenced by him during his almost 50 years in public service.