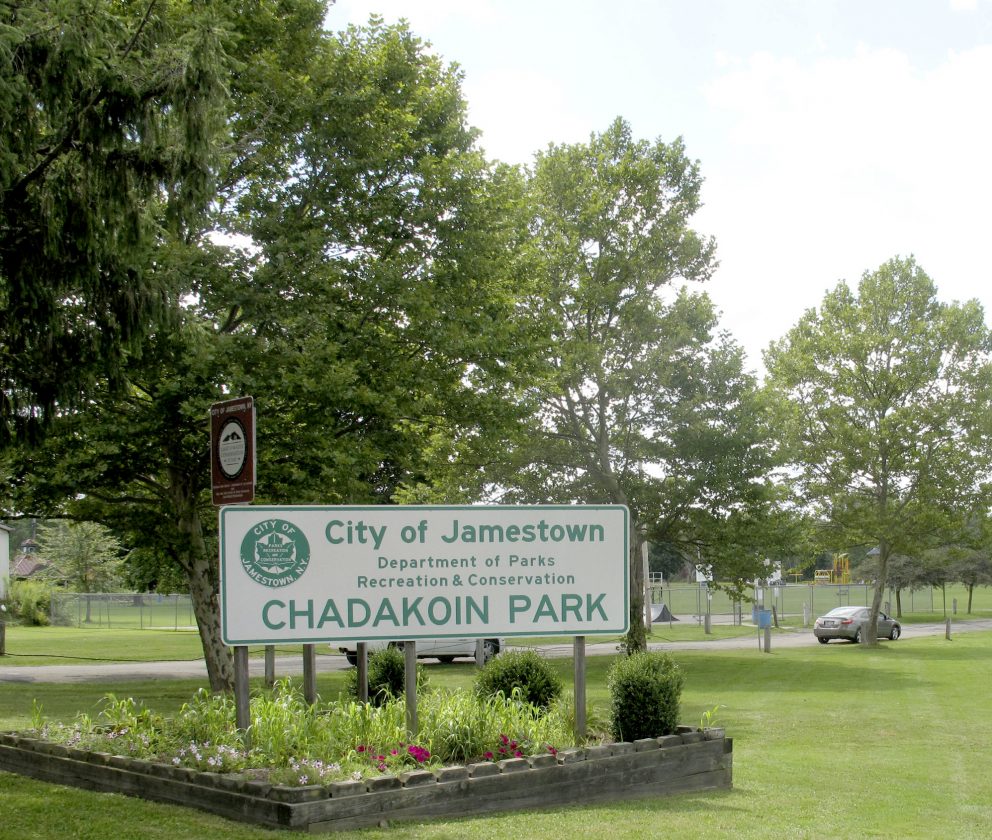 A proposal has been made to possibly change the name of Chadakoin Park to the Jackson Taylor Park in honor of Isabelle Jackson and Lula and Vivian Taylor. P-J photo by Dennis Phillips

On Monday, Wanda Cooper, Jamestown resident, spoke to the Jamestown City Council during its work session meeting about changing the name of the park to honor the late Isabelle Jackson and Lula and Vivian Taylor. She said the name of the new park would be Jackson Taylor Park.

Cooper discussed the community service all three provided the city as residents. Jackson was originally born in Newberry, S.C., Nov. 22, 1915, before Jamestown became her home as she was finishing school. Jackson graduated from Jamestown High School and later earned both bachelor’s and master’s degrees from Howard University, and an additional master’s degree from Indiana University.

In 1964, Jackson joined Jamestown Community College’s faculty. During her career at JCC, which spanned more than 30 years, Jackson directed the college’s educational opportunity and veterans affairs programs, and facilitated a number of other special outreach efforts. She was also a member of JCC’s Minority Community Advisory Council.

Jackson was also the director of the Jamestown YWCA Co-Ed Center from 1963 to 1964. She was the recipient of several awards, including Women of the Year of the Inter-Club Council of Jamestown in 1969; Civic Leader Award from the National Conference of Christians and Jews in 1985; the Outstanding Citizen Award from the Ebony Task Force in 1990; and numerous other awards. She was a lifetime member of Emmanuel Baptist Church where she served in many organizations and worked with the youth group.

Lula Taylor was the first African-American woman county legislator in the state of New York. She died March 27, 2018, at the age of 89 at UPMC Chautauqua. Taylor began her first of seven terms on the Chautauqua County Legislature in 1992 representing District 11, which serves the north side and parts of the west and northeast sides of Jamestown.

Along with being a legislator, Taylor served on several boards, commissions and community groups which included the Chautauqua County Health Board, the Health Network Advisory Board and Office of the Aging Advisory Board.

Lula, along with her husband, Vivian, received the John D. Hamilton award for community service in 2007. Together, the Taylors founded the Chautauqua County Black History Committee, chaired the Jamestown Interracial Forum, attended Blackwell Chapel AME Zion Church and both received several awards and honors for their dedication to the community and county.

The Taylors moved from North Carolina to Jamestown shortly after being married in 1950. The Taylors were married for 67 years.

Vivian Taylor spent more than 23 years on the Jamestown City Council. He died Oct. 24, 2018, at the age of 94 at UPMC Chautauqua. He was drafted into the U.S. Army in 1943. During World War II, he served in the European Theater of Operations until 1945, receiving various medals and battle stars.

Sam Teresi, Jamestown mayor, said the honor of naming the park after the Taylors and Jackson is long overdue. He said the honor would be highly appropriate.

Teresi said the process for changing the park’s name would be for the city Parks, Recreation and Conservation Commission to review and recommend it to the council for possible approval.