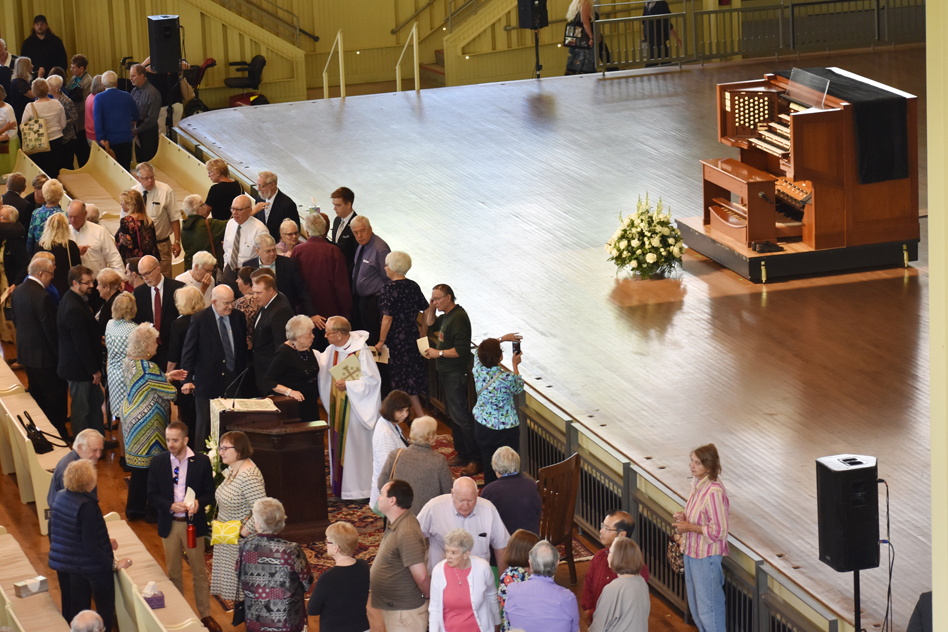 A memorial service honoring longtime organist Jared Jacobsen was held at Chautauqua Institution on Friday. Jacobsen, who was killed in a car crash Tuesday in Ohio, was recognized as a man of “extraordinary talent,” those who knew him said. P-J photos by Jordan W. Patterson

CHAUTAUQUA — The Massey Memorial Organ, positioned at the front of Chautauqua Institution’s Amphitheater stage, remained silent because its longtime operator and guardian was not there to play its keys.

Jared Jacobsen, who ushered in each day of the summer season at Chautauqua for 25 years, brought people together inside the amphitheater one more time during a memorial service honoring his life Friday.

“It’s with a profound sadness and grief that I welcome you back to the amphitheater this morning,” said Michael Hill, Chautauqua president, to begin the service. “Just five days ago Jared Jacobsen conducted the final sacred song services of the season.”

Jacobsen died Tuesday following a car crash near Geneva, Ohio. He was 70.

He was the primary operator and guardian of the 112-year-old Massey Memorial Organ, located in the amphitheater and considered the centerpiece of Chautauqua’s programming. He also shepherded the 50-voice Motet Choir for daily worship services and the 150-voice Chautauqua Choir for Sunday morning and evening worship; played weekly recitals on the Massey and the 1893 Tallman mechanical-action organ in the Hall of Christ; and appeared frequently as soloist with the Chautauqua Symphony and Music School Festival Orchestras. 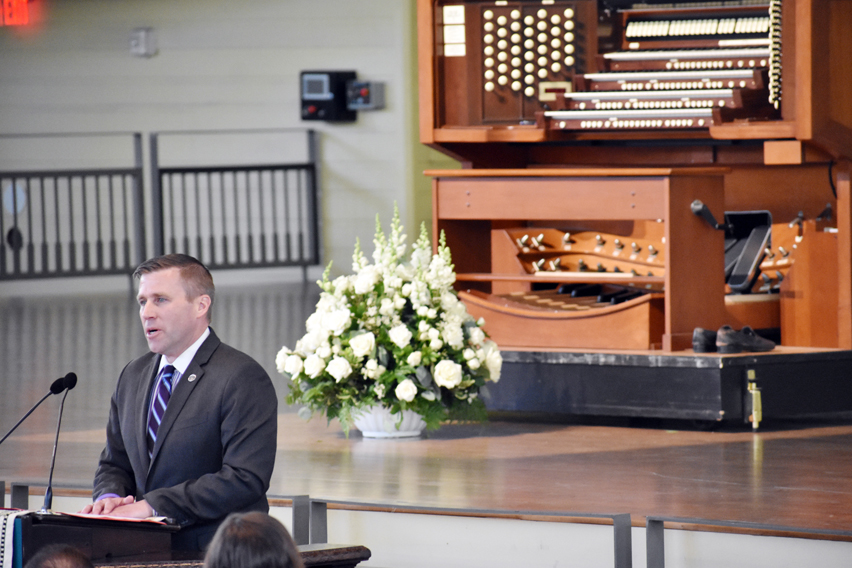 While members of the Motet Choir sang at the service, the Massey organ, which Jacobsen has been associated with for 25 years, remained mum throughout. Hill explained that it too was grieving.

Jacobsen graduated from Girard High School in 1967. According to his biography on the Girard School District Foundation’s website, Jacobsen began his musical career at the age of 5 as a piano student at the institution and had returned every year since.

“He was a man of extraordinary talent, holding the highest of expectations for himself and those around him. The music community has lost a star,” said Mary Kay Borkowski, president of the Girard School District Foundation, in an email to The Post-Journal.

The services included words from Hill; Maureen Rovegno, director of religion; Bishop Gene Robinson, senior pastor; Carol Chimento, a lifelong friend; Paul Fischer, who has worked on the organ for 25 years; Joan Brown Campbell, former director of religion; and even a silent appearance from Jacobsen’s dog.

“We gather today not for Jared’s sake,” Hill said. “He was a devout follower of Jesus Christ and he believed, as do I, that he’s entered into eternal life. Indeed for Jared the end to this Earthly life is just the beginning for him. So we gather today not to mourn for Jared’s sake. We gather today instead to pray in thanksgiving for a life well lived, for music that touched our souls, to grieve not that Jared has left this Earth but rather to mourn that his presence and his music will not grace our lives in the same way ever again.”

Tears fell from those in attendance throughout the program, and even Robinson warned the audience that he may not make it through his words without crying. He stopped on two occasions to gather himself after becoming emotional when talking about Jacobsen. But Robinson offered a moment of levity to an otherwise somber crowd.

“Well, enough about Jared,” he said following much of Friday’s service memorializing the late organist. “You’ve heard about Jared. I’m going to talk about God.”

He began to talk about God and heaven. The bishop said that on his refrigerator door is a magnet that reads, “Jesus loves you, but I’m his favorite.” He soon countered that everyone was God’s favorite. However, while many could argue who was truly the favorite, Robinson asked that everyone come to an agreement.

“Can we just all agree that today … God’s favorite is Jared Jacobsen?” he said.

Admittedly, Robinson said many popular descriptions of heaven are wrong. However, in Robinson’s self-described “child-like” depiction of the religious paradise, he envisions that his longtime friend is there full of love.

“I like to picture Jared right there,” he said. “I like picture Jared sitting in God’s great big lap being surrounded by God’s ever loving arms. No pearly gates. No pop quiz. Just love, unfathomable never-ending love.”

Hill promised a much larger service and celebration of Jacobsen’s life next year during Chautauqua’s 2020 summer season.