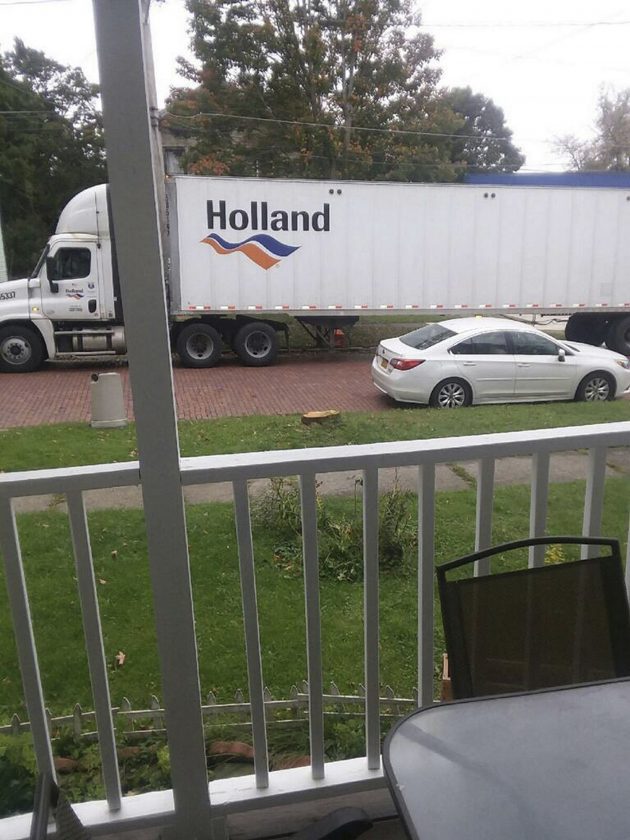 A photo of a delivery truck at NAPA Auto Parts, located at 1024 Washington St., submitted to The Post-Journal earlier this year by 11th Street resident Jeannette Jones. Jones appeared before the Jamestown City Council Housing Committee and during its work session meeting to ask city officials for assistance in eliminating late night deliveries and to prevent 18-wheel semi-trailer trucks from blocking the street. Submitted photo

Complaints of late-night deliveries were brought up during a meeting Monday of the Jamestown City Council Housing Committee.

Jeannette Jones, 11th Street resident, appeared before the committee’s work session meeting to discuss deliveries made to NAPA Auto Parts, located at 1024 Washington St. Jones said the 18-wheel semi-trailer trucks block the street and residential driveways while deliveries are made. She also said that deliveries are made in the early morning hours, sometimes as early as 1:45 a.m.

Jones said when city officials discussed the site plan with the owner James Beach, who owns seven regional NAPA stores, during a city Planning Commission meeting Dec. 3, 2016, Beach said regular delivery trucks will be about 24 feet long, similar to a U-Haul, that will drop off parts to the store at night between 10 p.m. to midnight.

Jones also spoke to the commission in 2016 regarding concerns about the store having a pedestrian door on the side of the building, which is facing 11th Street.

She said no other business along Washington Street has a pedestrian door facing a residential neighborhood. Jones repeated the same comment to the council Monday.

This is not the first time Jones has voiced her concerns about deliveries at NAPA since the store opened July 30, 2018.

She also attended the council voting session meeting in September 2018 to voice her displeasure with the situation at NAPA.

Sam Teresi, Jamestown mayor, said that Jones recollection is correct and that city officials will be working to improve the delivery situation.

He said Harry Snellings, Jamestown Police Department chief, will look into the situation about deliveries being made to the store on a residential street.

He also said city officials will also be looking to ensure NAPA officials install the necessary landscaping that was approved along with the site plan in 2016.

As part of the site plan approval in 2016, a condition was made for the store owner to install additional trees or shrubbery to lessen the noise that will be created by pedestrians using the door facing 11th Street.