A Week At The Fair For A 4-H Member 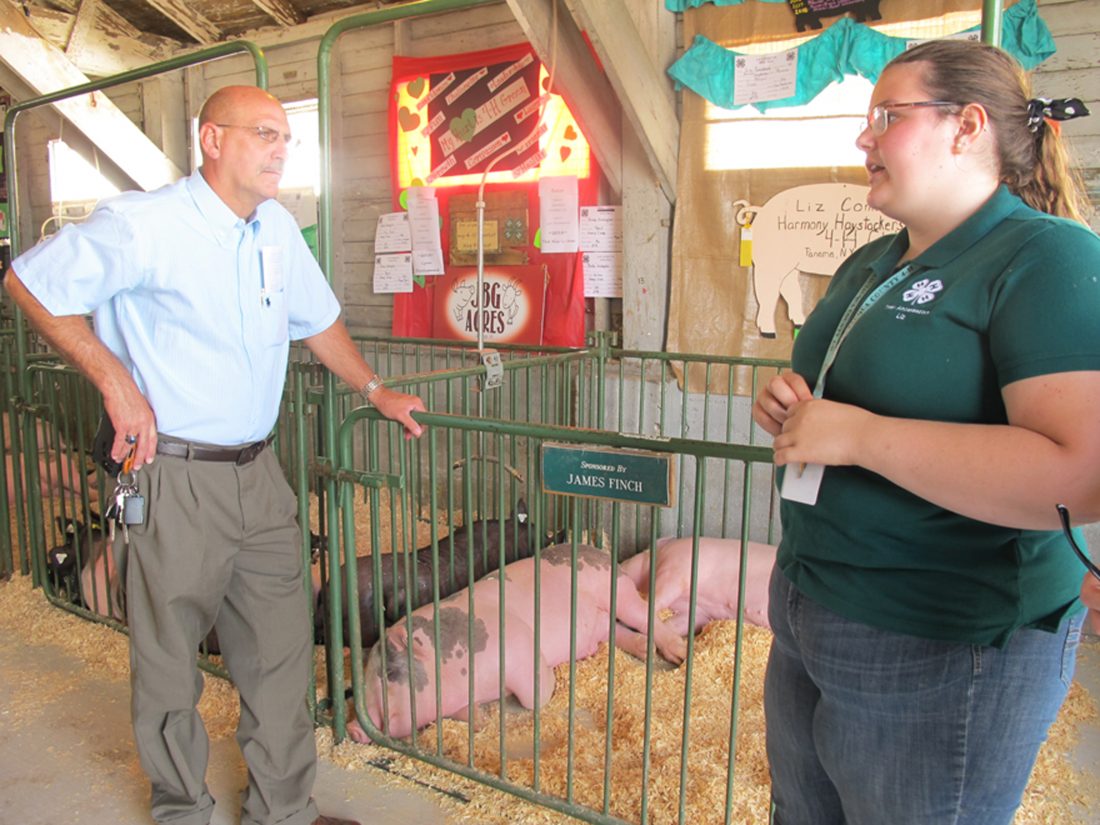 4-H Teen Ambassador Liz Comstock, right, led local elected officials on a tour of the 4-H buildings, including the pig barn to see her two pigs that she has spent the past several months raising. Pictured, left, is Doug Essek, Fredonia village trustee and mayoral candidate. Photo by Mary Heyl

While it may not take fair goers very long to walk through the animal barns at the Chautauqua County Fair, the nine 4-H barns and buildings actually represent months of hard work of the many club members, families and volunteers.

4-H Teen Ambassadors and Emily Reynolds, executive director for Cornell Cooperative Extension Chautauqua County, earlier this week gave local elected officials a special tour of the 4-H buildings and a window into a typical week at the fair for a 4-H member.

Reynolds, who has been serving as executive director for the past 13 years, oversees 15 4-H clubs in the county, which have approximately 325 regular members. “We reach about another 1,200 kids through special interest and short-term programming, which can range from four to six weeks or a few days,” she explained. “We have about 300 members participating in the fair this year.”

Reynolds pointed out some of the improvements made possible by Agriculture and Markets grants. “This is the small animal arena,” she explained. “Previously, it was a tent! This is all brand new, and we show primarily goats here.”

Behind the Conservation Building, the 4-H Snack Bar is one of the busiest dining areas on the fairgrounds. “It’s our second largest fundraiser, grossing between $10,000 and $15,000 a year,” said Reynolds. “All of that goes to support the 4-H programming and its operations.”

Inside the 4-H building, teen ambassadors Liz Comstock, Jared Dorman, Rachael Harper and Natalie Turecek led small groups to their respective club booths and the buildings where their animals live. Comstock, who is president of her Harmony Haystackers 4-H club, led her group to the pig barn.

“This year, we have about 64 participants in our project,” she said of the pig barn. “Each club member can bring up to two pigs to the fair. They’re all born after January 1, and usually weigh about 60 to 80 pounds when we get them.”

All club members are responsible for transporting their animals to the fair, which can be challenging for those students who live far away from Dunkirk. “It really depends on how well you’ve trained your pig how easily it can walk onto a trailer,” said Comstock. “It’s about 45 minutes for me to get here from Panama, but there have been kids here that have driven over an hour. The pigs tend to lose about 10 pounds in transport, just from the heat and the stress of the ride.”

Comstock’s two pigs weigh 260 and 273 pounds and have an average rate of gain of approximately three pounds per day. “The normal weight range for the fair is 220 to 290 pounds,” she explained. “It depends on how much and how often you feed them. About half of these pigs will go to auction on Friday and half will go home. Some will be breeders for next year.”

Comstock pointed out a sow that had given birth to a litter of piglets just one week earlier. “The gestation period is three months, three weeks and three days,” she said. “Usually, sows have two litters a year, and they can range from 12 to 15 in a litter.”

4-H club members brought their animals to the fair on Saturday, and on Sunday, they participated in the open class showing. On Tuesday, members and their pigs took part in the 4-H showmanship event, and on Friday, the pigs will go to market.

“Our animals are sold first at meat auction,” Comstock explained. “The minimum price is usually a lot less than what we end up selling them for. Usually $2.50 per pound is the minimum, but in the last couple years, it’s been about $3. The most I’ve gotten is $4 per pound. Not a bad take for a 250-pound pig!”

Comstock has been a 4-H member for over 10 years, and has enjoyed guiding younger members over the past few years. “I just graduated from Panama and will be going to SUNY Cortland this fall,” Comstock told the OBSERVER. “My birthday is in June, so I could participate next year, but it depends on how busy I am after my first year of college!”

The fair will still be an important part of her family, however, as she has a younger sibling in 4-H, too. “I’ll still be around,” said Comstock. “4-H never leaves you.”