‘Icing On The Cake’ 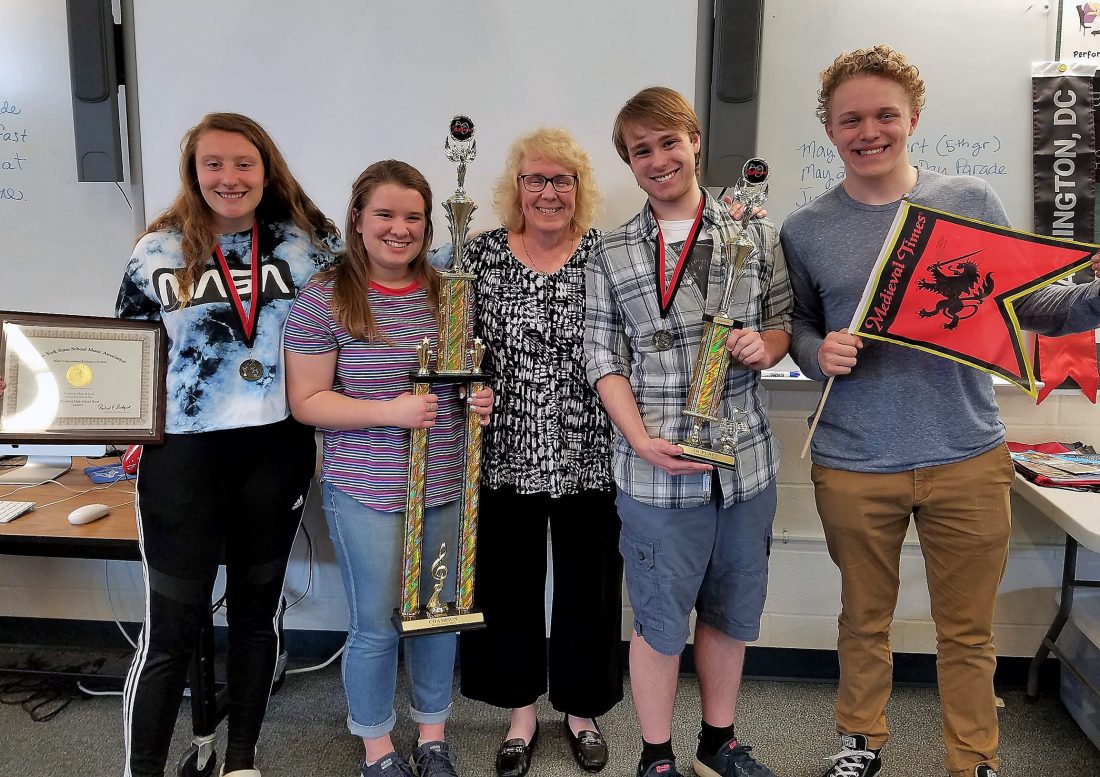 WESTFIELD — Sometimes one can come home from a trip with a lot more than one started with.

The Westfield Academy and Central School band certainly knows this to be true. As part of the four-day trip, the band took part in the Fiesta-val competition in Washington, D.C., and came home with a first place trophy, a grand champion trophy and two awards for first place soloist.

“I signed up for this competition based on the date, so it would fit into our schedule,” said WACS band director Helen Ihasz. “I really felt like they were ready and when they played, I could not have asked them to play better.”

The competition was part of a trip the band takes every three years, Ihasz said. “It takes that long to raise enough money for the trip,” she said.

This year’s trip included a music clinic at Penn State University and a visit to the National Aquarium in Baltimore. The Fiesta-val in Washington included a tour of Washington landmarks, attending the annual Cherry Blossom Festival and parade, and a Spirit of Washington breakfast cruise on the Potomac.

In the competition, the WACS band performed three pieces of music. They played “Liberty Bell” by John Philip Sousa; “Wild Dance” by Douglas Akey: and “Fate of the Gods” by Stephen Reineke.

When it was announced that the 42-member WACS band was the winner, Ihasz said she was elated. However, there was more to come as the band was also named Grand Champion and 11th-grader Brad Belmondo, who plays trumpet and 10th-grader Angel Busch, who plays French horn, were named as first-place soloists.

“I did not expect the other awards,” Ihasz said. “That was really the icing on the cake.”

The students were understandably thrilled as well.

“I was really nervous to play my parts,” said 10th grader Emma Heim, who plays flute and piccolo. “When they announced our name, I was totally elated. We had worked so hard and put in so much effort.”

Tenth-grader Owen Bates, who plays trumpet, said they were all very tired. “We did not get that much sleep the night before, so I was really tired,” he said. “I was really nervous. We did the best we could. We won this because of Mrs. Ihasz.”

Brad Belmondo, an 11th grade student, won the award for his trumpet solo. He said that, going into the competition, he was very confident the band would do well.

“I knew the many, many hours we had put in, and I was happy with how we demonstrated what we can do as a team,” Belmondo said. “It was spectacular to know that all of our work went toward something really awesome.”

Tenth-grader Angel Busch was selected as best soloist on the French horn. She said that she was also confident the band would do well, but that changed as the time to perform drew close.

“Ten minutes beforehand, I became so nervous. I had never played in front of other schools in competition, especially having a solo,” Busch said. “After the nerves settled down, I knew we had it in the bag. We are a team, we are a family, and we did really well.”

All of the students credited Mrs. Ihasz with their success, not just as a band, but also in the bonds they have formed. Ihasz agreed with this wholeheartedly. “I really feel that this whole experience makes us feel like a family,” Ihasz said. “It was very rewarding, the whole trip.”