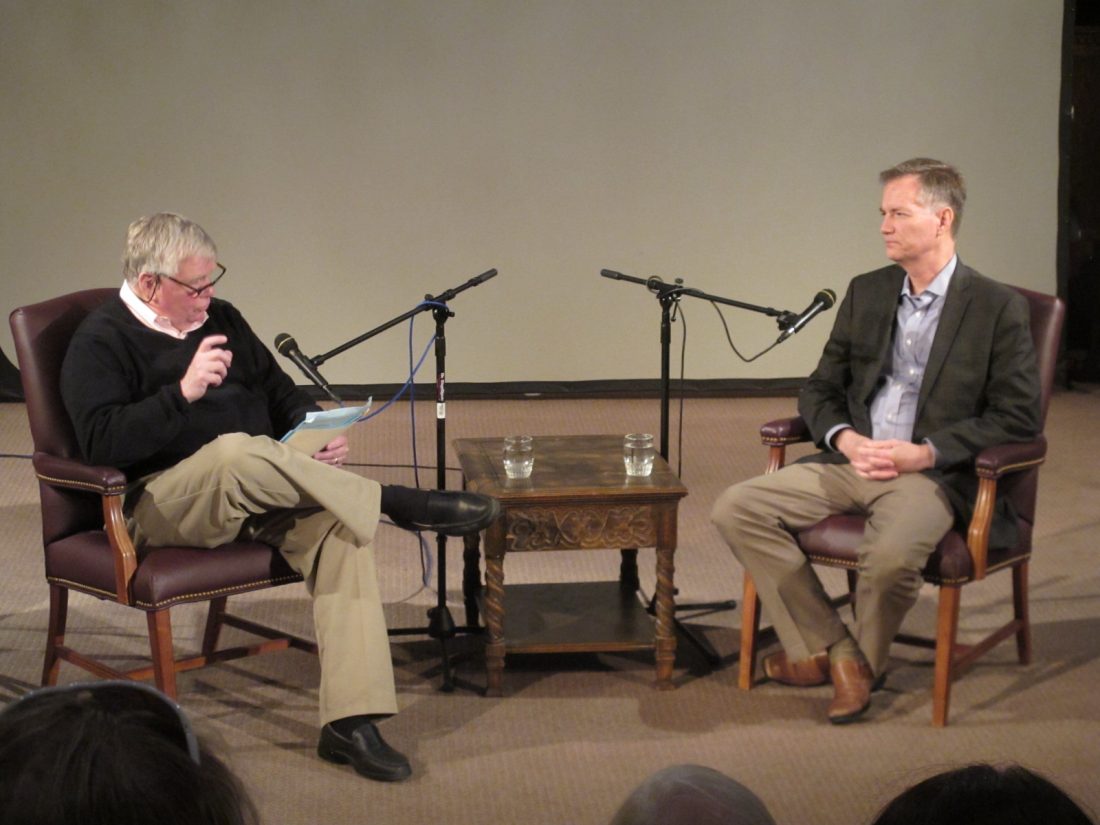 Robert H. Jackson Center co-founder and board member Gregory Peterson speaks to Truman Presidential Library Director Kurt Graham about the Jackson and Truman. Truman thought highly of Jackson when he elected him as U.S. Chief of Counsel of the Nuremberg Trials. P-J photo by William Mohan

“The guilty must not go unpunished.”

These were the words of President Harry Truman following the conclusion of World War II that were heard and seen publicly for the first time after airing on CBS nearly 55 years ago. The series called “Revisions” originally aired in 1964. The film was shown at the Robert H. Jackson Center on Wednesday to coincide with an interview of Truman presidential library director Kurt Graham. The event was conducted by Jackson Center co-founder and board member Gregory Peterson.

While 26 episodes of the series initially aired, the one presented Wednesday elaborated on Jackson’s involvement with Truman during the aftermath of the war. It also discussed why Jackson was chosen by Truman to be the U.S. Chief of Counsel of the Nuremberg Trials and subsequent acquaintances between the two men.

“I want to make it impossible for anyone to say this is a lot of propaganda,” Truman said. “I want it down in black and white and the evidence be made available for future generations. That was the reason I ordered the trials.”

Truman made the argument at the time that members of the allied countries wanted to initially treat the members of the now toppled Nazi regime as a political matter.

Having seen many of the failed attempts of accountability following World War I including the League of Nations he did not want to see history repeat itself.

“I knew what war was,” Truman said. “I was determined to let the whole world know just what had been happening (in Germany).”

Truman chose Jackson to serve as the U.S. Chief of Counsel of the Nuremberg Trials in May of 1945. As such, he had the power to represent the United States in the trials. He also drafted the London Charter of the International Military Tribunal the following August. The document became the legal basis for the Nuremberg Trials.

Truman also chose Jackson for being against the decision of farcical trials citing what happened during the first World War. In particular, Jackson cited the ousting of Mussolini by the Germans (lynch law).

Under Jackson’s oversight of Nuremberg, 80,000 Nazis were tried for war crimes.

After the film concluded, Peterson interviewed Graham on the collaboration between Jackson and Truman. Graham oversees the first presidential library in the country located in Independence, Mo. He argued that while Truman is credited with being the president that oversaw the official end of WWII, he also can be credited with changing history on a rapidfire basis. This was especially true in his early days, Graham said.

“Truman is sworn in as president in April 12 1945. He elects Jackson and he has to decide whether or not to create the United Nations,” Graham said. “This all takes place in the first four months of his presidency.”

Graham said Truman’s choice of Jackson was inspired by the outcome of the Mellon case, which lasted from 1934 to 1937. During that case, Jackson successfully prosecuted Pittsburgh businessman Andrew Mellon for tax evasion and fraud.

During the trials at Nuremberg, Jackson was told he could return to the United States upon establishing the court. However, he refused to return home until the trials were finished. Truman agreed and allowed him to stay in Europe.

In addition to agreeing with Jackson’s approach to law, the two men shared backgrounds from small communities. While Jackson’s hometown was Frewsburg, Truman served as a judge in Jackson County, Mo. which included Kansas City. The two men are also said to have had lunch together at least twice.

The only time that Jackson and Truman did not get along in politics was when Jackson overrode Truman’s attempt to override the steel industry during the Korean War in the Youngstown Sheet and Tube Co. v. Sawyer case. It decided that president’s actions to control the steel industry was unconstitutional because it had been authorized by Congress. Jackson wrote the concurring opinion in that case.

More events are planned at the Jackson Center in May and June. For more information visit roberthjackson.org.