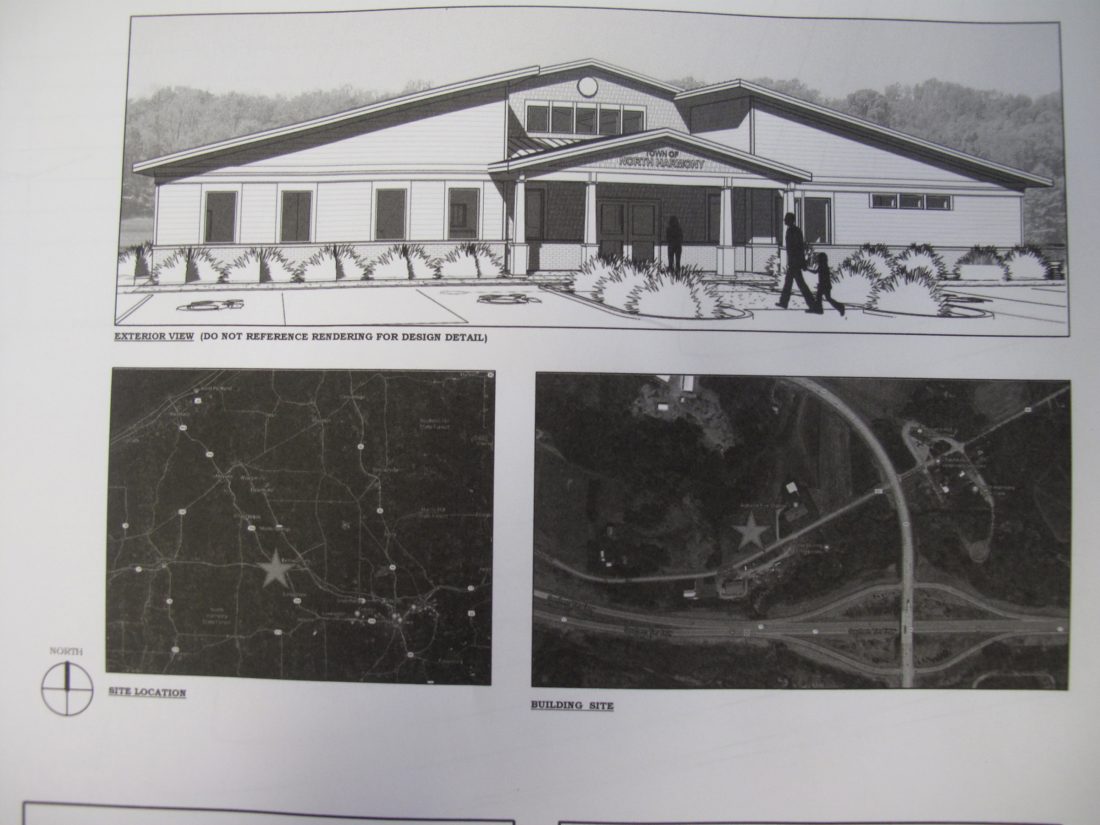 Blueprints of the site location and exterior of the new North Harmony town building to be built later this year. P-J photo by Eric Zavinski

STOW — North Harmony will be sitting pretty with a new town building by the end of this year.

That’s Town Supervisor Robert Yates’ projection now that bids are open for contractors to consider the project, which will entail the construction of a 92 feet long by 60 feet wide building adjacent to the Ashville Fire Station located at 5338 Stow Road.

Approximately 5,500 square feet will be a step up in terms of size for the town offices and court, which are currently located at 3445 Old Bridge Road in Stow. Yates showed blueprints for the new building design to The Post-Journal on Tuesday, following a town board meeting the night before that officially opened the project for bidding.

The approximately $1.7 million building will largely be funded through a $1 million grant from the Dormitory Authority of the State of New York. Yates thanked former state Sen. Cathy Young, former town supervisors Sally Carlson and Frank Stow, and past and current board members for helping to allocate the DASNY award. Town employees, including bookkeeper Robin Miller, were thanked for helping make the project a reality.

“The bids have been opened, and they’re under $2 million,” Yates said.

Yates is in negotiations with potential contractors, and he thinks construction could begin as early as this season. He anticipates construction lasting no more than six months.

Yates highlighted safety as the most important new element of the incoming building. He said that not only will the new building be completely compliant with the Americans with Disabilities Act, but it will also protect residents and town employees in the courtroom setting.

He mentioned that “a lot more security” will include bulletproof windows, a private judge’s chambers and a more isolated courtroom that can’t be seen from outside.

“The priority is the safety of our courts,” Yates said.

In order to make up for the costs of the building and other assets, part of the future plan is to have the new town building and the Ashville Fire Station share services including water, electricity and eventually solar power.

Yates also said that the town plans on using an electricity-powered vehicle when the new town building is built.

“(The town building) has been on the books for many, many years,” Yates said. “It’s going to pull the town center together.”

Fifty-three acres of North Harmony waters will be treated, including a 35-acre area around the Bemus Point-Stow Ferry dock and an 18-acre area in Hadley Bay.

“This is working,” Yates said of the collaboration amongst municipalities for maintenance of Chautauqua Lake this year. “It’s been a good learning experience.”