Alexa Carlson gets advice from Flying by Foy about gaining confidence and feeling comfortable in the harness used to suspend the actors from the ceiling.

With the chimney-laden London skyline in the background, Carlson floats across the stage holding an umbrella.

With only her legs visible, Senior Alexa Carlson, who portrays the titular character in Southwestern High School’s musical production of “Mary Poppins,” floats in mid-air during a technical rehearsal held Thursday. Staring up at Carlson are director Linda Ostrom (second from left) and fellow cast, crew and volunteers.

A crew member untangles a letter that will be thrown into a fireplace during a special-effects scene of “Mary Poppins.” 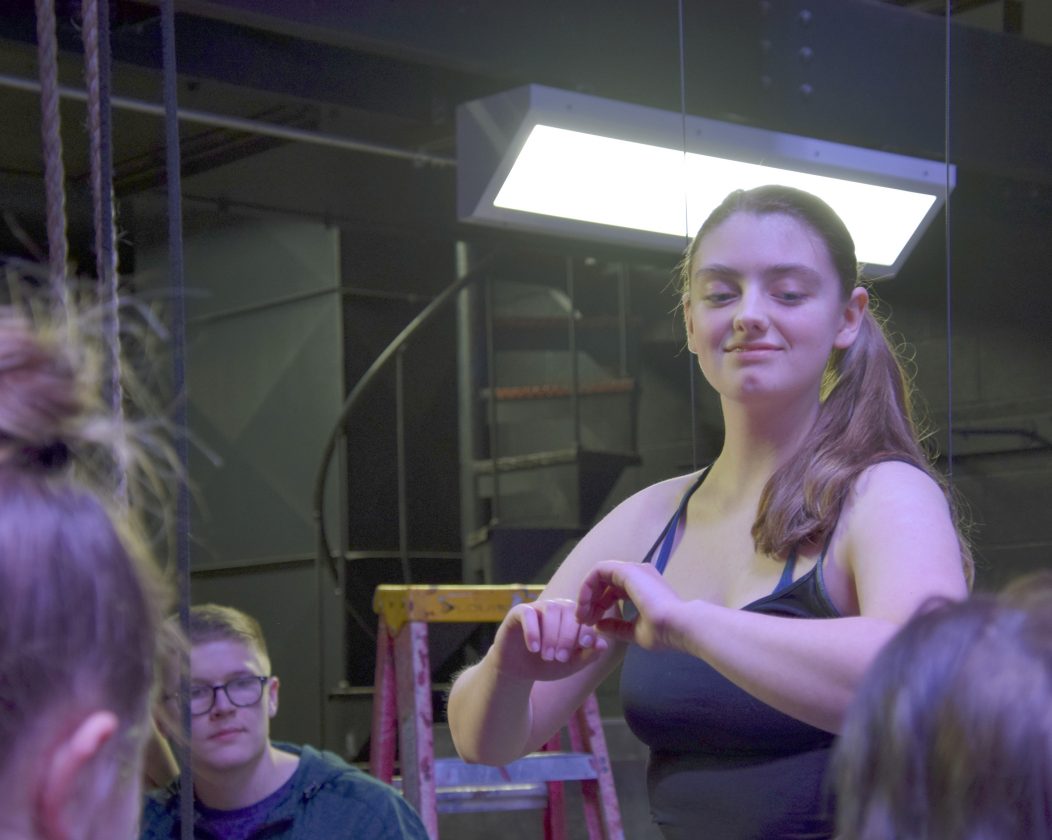 Alexa Carlson gets advice from Flying by Foy about gaining confidence and feeling comfortable in the harness used to suspend the actors from the ceiling.

Featuring a cast of 45 and some dizzying special effects, the first musical production being staged in the newly renovated auditorium at Southwestern Senior High School is, to say the least, ambitious.

Rehearsals are underway for a trio of performances of “Mary Poppins” and some of the four-dozen actors and the 15-person tech crew overseeing lighting, sound and set design are preparing to soar. Literally.

As you may recall, the Disney classic film features a couple key scenes that take place in mid-air, and Southwestern’s production aims to include those scenes. Flying by Foy, a theatrical flying service based in Las Vegas, visited Southwestern to help prepare the thespians for the air.

Asked if the students had any trepidation about taking flight, director Linda Ostrom shook her head and smiled: “They are delightfully looking forward to it,” she said. “There’s a lot of magic in this show.”

Senior Alexa Carlson, who appeared in last year’s “Back to the 80’s” musical, is starring as Mary Poppins. “It’s my first lead,” says the member of the Class of 2019. 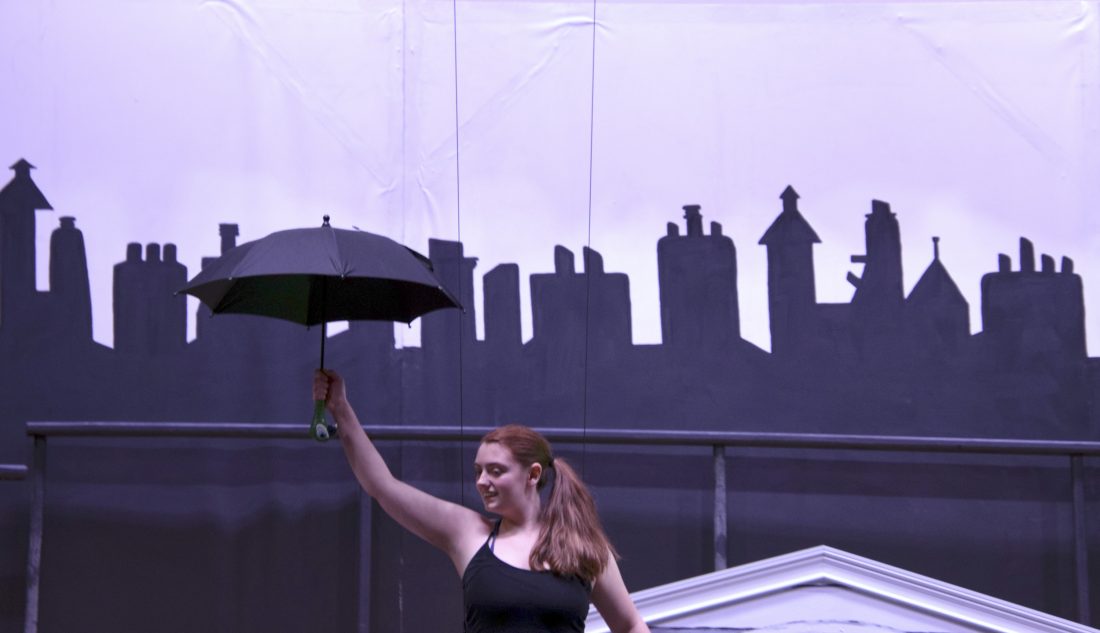 With the chimney-laden London skyline in the background, Carlson floats across the stage holding an umbrella.

She’s not worried about fluttering about the stage and notes that she was custom-fitted for safety harnesses. “I’m so excited. It’s a professional team, so I feel really safe,” she said.

Junior Jackson Vanstrom, whose audition landed him the lead role of chimney sweep Bert, is marking his first appearance in a school musical, and he admits to being a bit nervous. Last year he attended “Back to the 80’s,” thought it looked like a lot of fun and was inspired to audition for “Mary Poppins” this year — not expecting to land a starring role.

“It’s a little nerve-wracking,” said Jackson. “I am a rookie. I just like the whole family aspect of it and how it brings people together.”

For those unfamiliar with the classic 1964 film “Mary Poppins,” the story centers around Jane and Michael, the children of the wealthy and uptight Banks family. When faced with the prospect of a new nanny, they are delightfully shocked by the arrival of the magical Mary Poppins. The kids embark on a series of fantastical adventures with Mary and Bert, her friend, and are inspired to pass on their nanny’s sunny attitude to their preoccupied parents. The SWCS production is well-timed after the December 2018 release of the hit sequel “Mary Poppins Returns,” which was a worldwide hit.

Something else unique about this year’s musical is that it is a Middle School/High School production. Most of the SWMS students are cast as toys and participate in the ensembles, but two middle-schoolers have lead roles as Mary Poppins’ young charges. Madelyn Wakeley will play Jane Banks and Jacob Lawton will play Michael Banks. 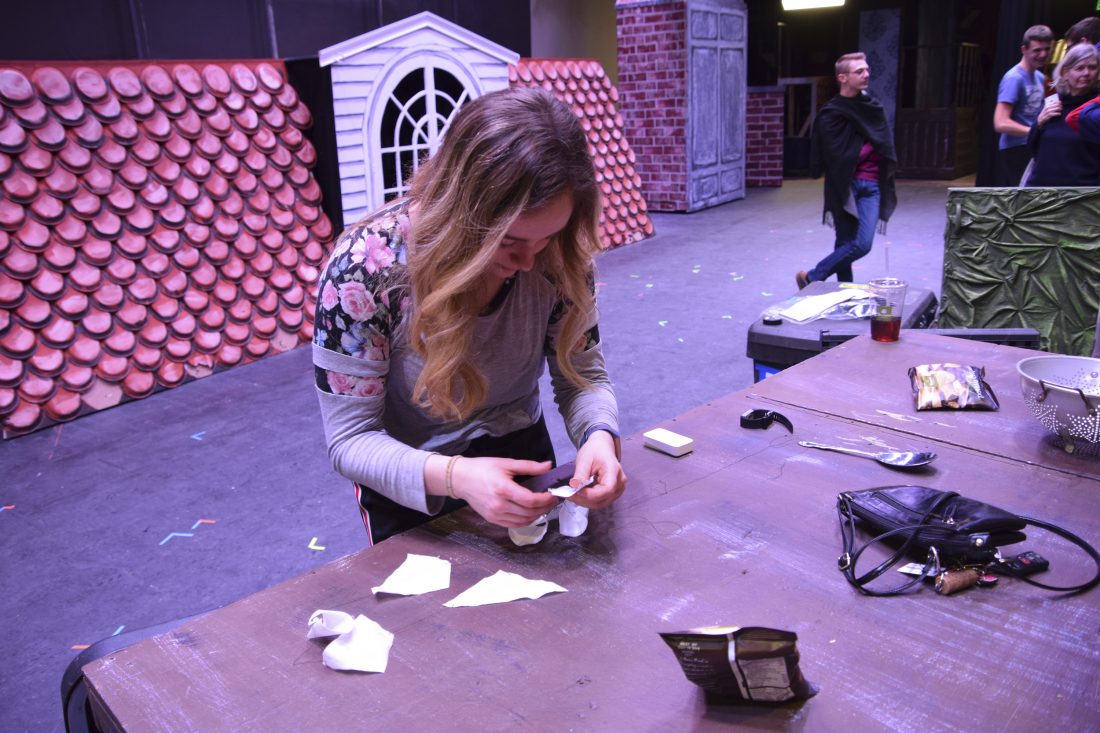 A crew member untangles a letter that will be thrown into a fireplace during a special-effects scene of “Mary Poppins.”

Flying by Foy rehearsed with the cast and crew in late February. It took about five hours for the equipment to be installed and was followed by a three-hour rehearsal with Vanstrom and Carlson, the students portraying Bert and Mary. The operators, who are also students, are being overseen by an adult flight supervisor. She is a Cummins engineer and is volunteering her time.

BEHIND THE SCENES: A HIGH SOCIETY

Amid all the excitement about flying, other plans are progressing: Elaborate sets are being designed to immerse the audience in 20th century London. As of mid-February, Ms. Ostrom and her sidekick Sue Marsh had already pressed 300+ articles of costume apparel. Technical director Sue Huther is overseeing the 15-person crew.

Part of the district’s Capital Project, the auditorium was renovated during Summer 2018. When the renovations were done all new ropes, pipes, cable systems, and headblocks were installed. The auditorium also features new LED lights, a new lightboard and a new soundboard. Additionally, the seats were recovered in Trojan blue. New lightboard, new soundboard. Crews from Pittsburgh Stage adjusted the fly system.

The new microphones will be controlled individually via an iPad by sophomore Mark Chapman, described by Ostrom as “super contentious.” Previously, the district used to spend a few thousand dollars on renting microphones for the annual musical. The purchase of microphones allows them to put that money toward hiring Flying by Foy. 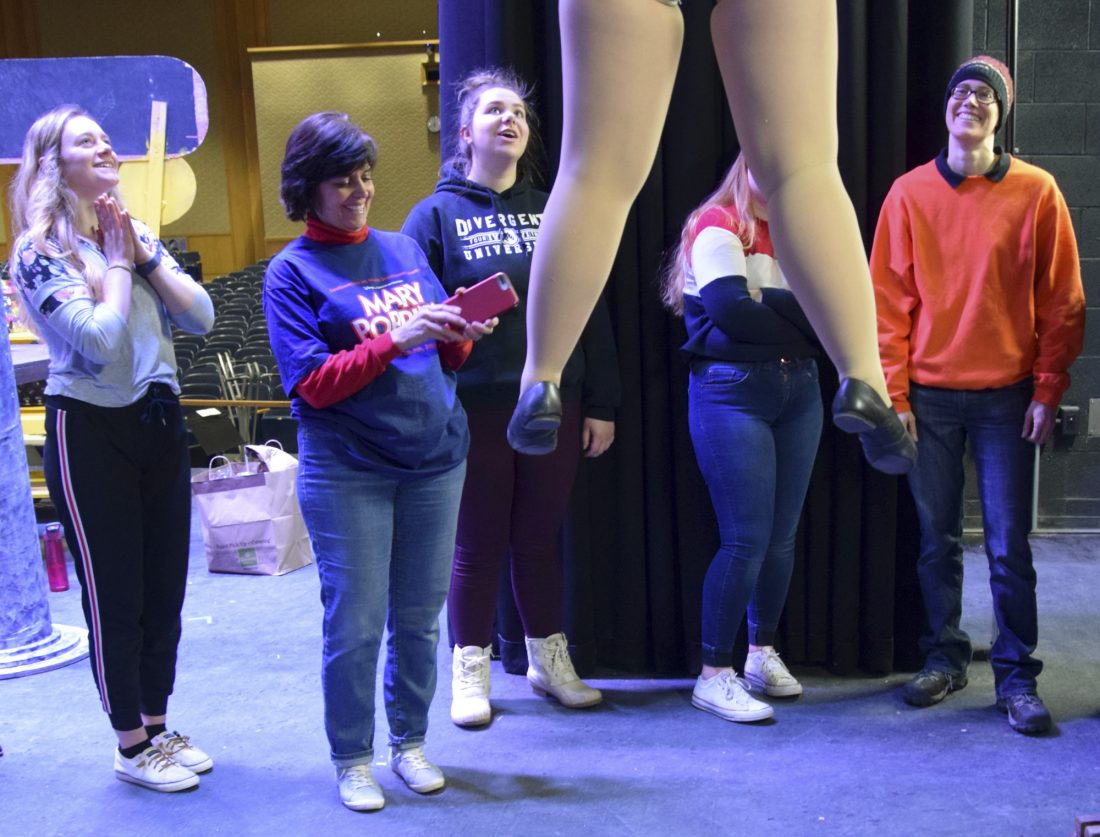 With only her legs visible, Senior Alexa Carlson, who portrays the titular character in Southwestern High School’s musical production of “Mary Poppins,” floats in mid-air during a technical rehearsal held Thursday. Staring up at Carlson are director Linda Ostrom (second from left) and fellow cast, crew and volunteers.

Junior Addison Pope is in charge of lighting for the show. He was trained in the craft as a freshman on “The Addams Family” and is taking his “Mary Poppins” responsibilities very seriously.

“My job is done before the play begins,” he said. “All I have to do is press play, but that doesn’t reflect the amount of work that goes into it.” He’s been preparing for weeks and is proud to be involved with the first production in the new aud. “I get to go to all the concerts and it’s a nice way to earn community service. Plus I get to meet and interact with all the groups that use the auditorium.”

He will be in the lighting booth in the balcony with Mark Chapman as he does sound.

“It’s just work on work on work,” chimed in Vanstrom, who plays Bert, of the crew’s efforts. “They’re very goal-oriented.”

The orchestra consists of students musicians and professionals. Musical numbers include: “Anything Can Happen,” “Step in Time,” and “Jolly Holiday.”

“They all bring their own thing to this effort as an entire team,” said Superintendent Maureen Donahue about the staff involved in the production. “Dana Lovecchio can get blood out of a stone, (art teacher) Jenni Brown is super creative, we have Anne Yeager doing choreography along with Marie Karbacka. Wym Imfeld, a retired SWCS home career teacher is our costume mistress. Plus we have a lot of parent and community volunteers.”

Brown, who is overseeing set design commends the group of students who have been painting the set.

“I feel this year I’ve really let them take over the detail work,” said Brown. “And they have really stepped up and done a great job!”

And Alexa Carlson, in the titular role of “Mary Poppins,” is ready for her close-up – whether her head is in the clouds or her feet are firmly planted on the floor.

“It’s one of the biggest shows we’ve ever done,” said Carlson. “We’ve poured our hearts and souls into every brick and every memorized line.”

All seats are reserved. Tickets cost $8 and may be purchased pre-sale online here: https://search.seatyourself.biz/webstore/accounts/swcs/buy-tix?d=0&landingMessageSeen=true.