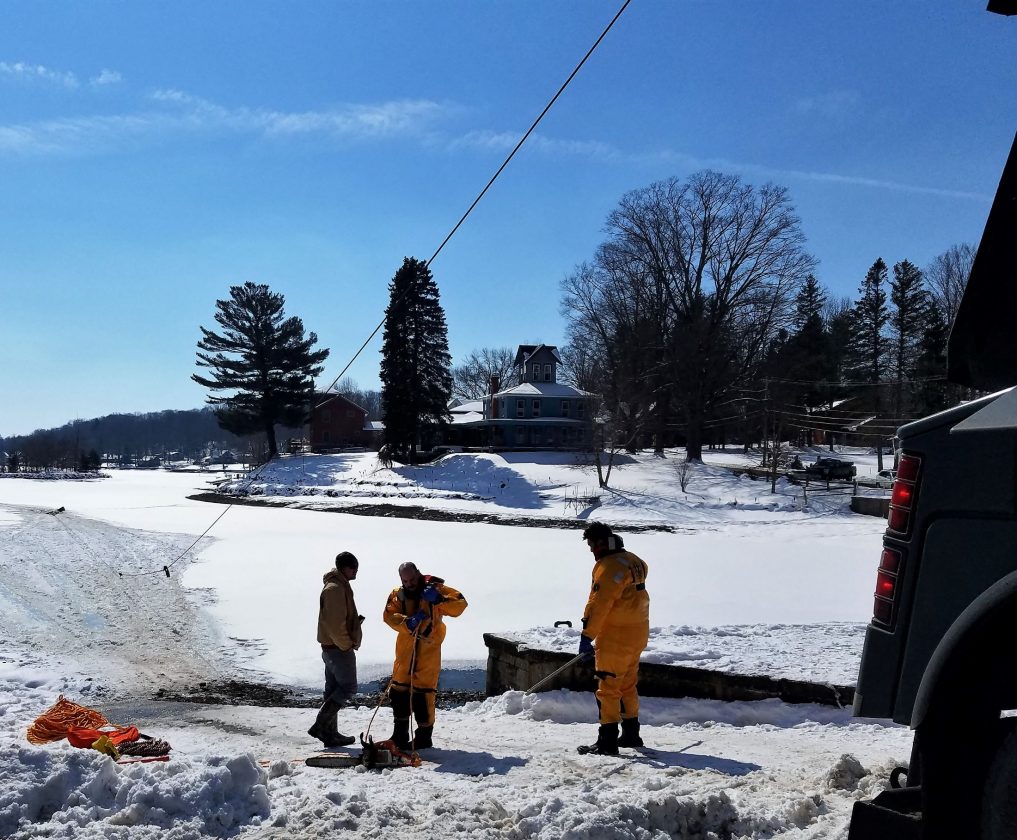 Findley Lake firefighters Randy Hamilton and Donovan DeBoe confer at the boat ramp into the lake before heading out for another attempt to retrieve an ATV that broke through the ice and sank Thursday evening.

FINDLEY LAKE — Findley Lake volunteer firefighters worked for more than five hours on two separate days to recover an ATV that broke through the ice.

According to Donovan DeBoe, a firefighter with Findley Lake, two men were riding a Polaris side-by-side ATV on Findley Lake at about 5 p.m. Thursday when it broke through the ice and sank. The men were able to climb off the ATV as it broke through, thereby escaping injury.

“I could see the tracks on the ice where he drove it out,” DeBoe said. “Coming back, he didn’t follow his tracks and he hit a thin spot. He said it went down quickly.”

DeBoe and fellow firefighter Bill McKillip worked for more than two hours Thursday evening to retrieve the ATV. “It was real cold out there last night,” DeBoe said.

The operation was almost a success, until the chain attached to the ATV broke, DeBoe said. “It was coming out and we thought we had it when the chain snapped and the whole thing went back down to the bottom of the lake,” he added. 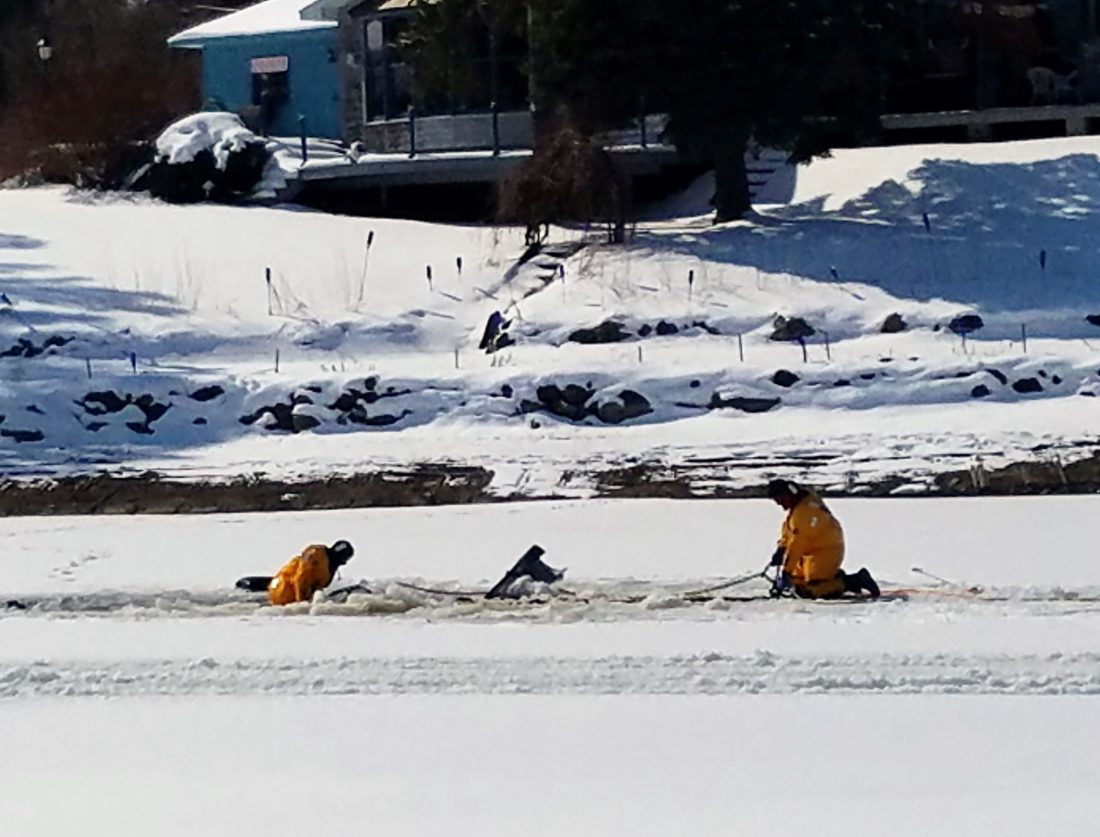 Findley Lake firefighters Randy Hamilton and Donovan DeBoe work to retrieve an ATV that broke through the ice Thursday evening.

DeBoe returned to the scene Friday morning with Assistant Chief Randy Hamilton to continue the effort to retrieve the ATV. A larger wrecker, owned by G. B. Repair of Ripley, was brought in to assist.

Despite using heavier equipment, DeBoe and Hamilton struggled for more than three hours to retrieve the ATV. Several times, they experienced setbacks, as the machine started to come up and then caught on the ice, or the bottom of the lake, Hamilton said.

A few times, the firefighters got the ATV out of the water, only to have it break through the ice and go down again.

“It came up out of the ice and went back down three times. It went right through and sunk,” DeBoe said.

“It was pretty discouraging,” Hamilton said. “A couple of times we had it up, and it just didn’t want to cooperate the way we wanted it to … eventually, the ATV flipped over under the water and we were able to get a chain under it and pull it up.”

The ATV was severely damaged, DeBoe said. The roof was ripped off and the control bars had been snapped. “It’s pretty banged up, probably a total loss,” DeBoe added.

Despite the damage, Hamilton said, no fluids from the ATV were released into the lake.

“I talked to the DEC officer,” Hamilton said. “It did not appear that any fluids leaked into the water, so there was no contamination.”

Both Deboe and Hamilton advised that people should not take any machinery onto the ice.

“The weather is getting warmer. I wouldn’t take any machinery out. Even walking out, I could feel a few layers cracking under my feet,” Hamilton said. “We got fortunate this time that no one was injured, Who is to say the next time that we might have to rescue a person.”