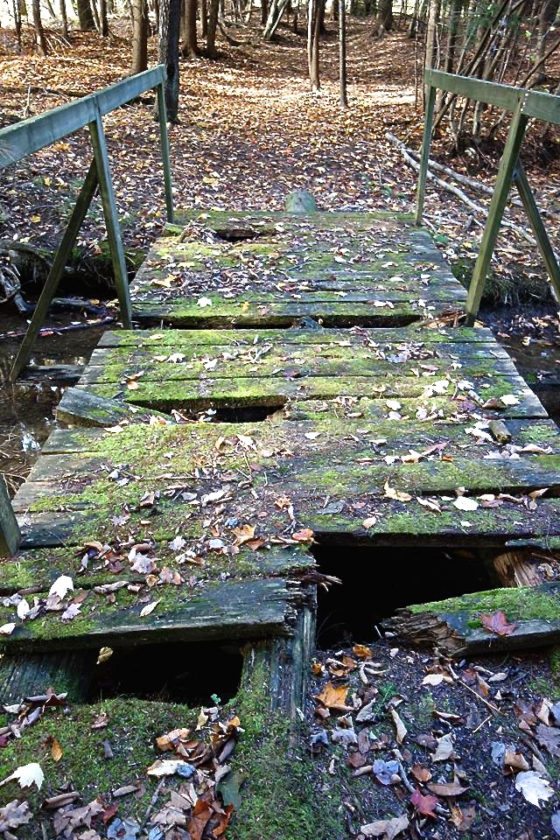 The newly organized “Friends of Timbercrest” group is planning a work weekend to clean up the trails and fix the bridges along Keyser Lake at Girl Scout Camp Timbercrest, April 13-15. The dilapidated bridge shown in the photo is just one of several along the Lake Trail that has fallen into disrepair. Submitted photo

RANDOLPH — The “Friends of Timbercrest” are gearing up for their second work session at Camp Timbercrest to clean up, fix up and prepare the camp for the summer season. People in the community are invited to join them for a three-day work weekend that will begin Friday at 3 p.m. and continue through Sunday, April 15, until 3 p.m.

Supported by the Girl Scouts of Western New York, the Friends group is led by Girl Scout alumni volunteers whose mission is to preserve, care for and promote Girl Scout Camp Timbercrest, located at 11169 Moore Road, in Randolph.

Jennifer Schlick, volunteer chair for the Friends group, said the idea was conceived by herself and her daughter, Emily, who are both “Lifetime Girl Scouts” and passionate about Timbercrest. She said the group was formed last July when they attended the camp’s 50th anniversary of residence camping.

“As we walked around the camp, there was a mixture of nostalgia and disappointment because some of the things had run down,” she said. “Between the two of us, we decided we had to do something and thought of the Friends group that would come in as work parties to help clean up the trails and fix the bridges and some of the buildings on the property.”

Schlick said both Chief Executive Officer Judith Cranston and Chief Operating Officer Alison Wilcox were in attendance so, after the ceremony, she took them on a little walkabout around camp and pointed out things that needed some tender loving care. Then, she presented the idea of starting the Friends of Timbercrest group to the Girl Scout Council, and met with Chief Development Officer Jerilyn Hickey.

“Our group is modeled after the ‘Friends of Allegany’ group that does so much for Allegany State Park,” she said. “Our thought was, ‘Hey, we love this camp and we’ll come and do whatever it takes to help out.'”

The newly formed Friends group began work last October to preserve Camp Timbercrest for years to come. They started out painting the infirmary and the waterfront buddy board, clearing trails, picking up trash, and clearing trees and shrubs from the Strawberry Hill camping unit. The Lake Trial that goes all the way around Keyser Lake is another major project. Schlick said the trail is overgrown with brush and the bridges are falling apart, so it’s hard to walk it now because it’s fallen into such disrepair.

“The trail and the bridges are one of our big projects and the group is very excited about it,” she said. “We started the ‘Build a Bridge’ campaign and we’ve raised over $4,000 towards new bridges; some of those will start going in this spring.”

Last fall, the group opened up some areas around the tents to provide more daylight and airflow to reduce moisture and mold. Schlick said they also began creating “viewscapes” that are narrow clearings so Keyser Lake, the gem of the property, can be seen from several points through the heavily forested areas.

Schlick estimates the work party got about a third of the way through the planned projects. With the official summer camping season beginning at the end of June, they need to get as much done as they can during this next work weekend in April.

According to Schlick, other areas of the camp also need attention because there are a lot of dead and dying trees that are leaning and dropping branches. With the last heavy snowfall creating more debris, they will have extra work to do.

“There is the potential for volunteers to continue work on occasional Saturdays after the scouts leave from their camping sessions, especially on the Lake Trail where a lot of work awaits us,” she said.

Schlick recognizes “Ro” Woodard as one person in particular who has stepped up to help the cause. She said Woodard was a former counselor at the Girl Scout Camp from the very beginning. She’s been very instrumental in helping the group get up and running, including a Camp Timbercrest sweatshirt sale.

Camp Timbercrest opened for day camp in 1963 and residence camp was first offered in 1967. The camp serves the Girl Scouts of Western New York, a council that covers nine counties including Chautauqua, Cattaraugus, Erie, Wyoming, Livingston, Niagara, Orleans, Genesee and Monroe. According to Schlick, the Girl Scout Council has limited staff, so they are using the Friends of Timbercrest group as a pilot program for Friends groups at other camps.

Anyone interested in joining the Friends group and/or volunteering to take part in this service project are asked to register no later than April 8 by emailing friendsoftimbercrest@gswny.org. For more information, visit online at gswny.org and find “Friends of Timbercrest” on Facebook.