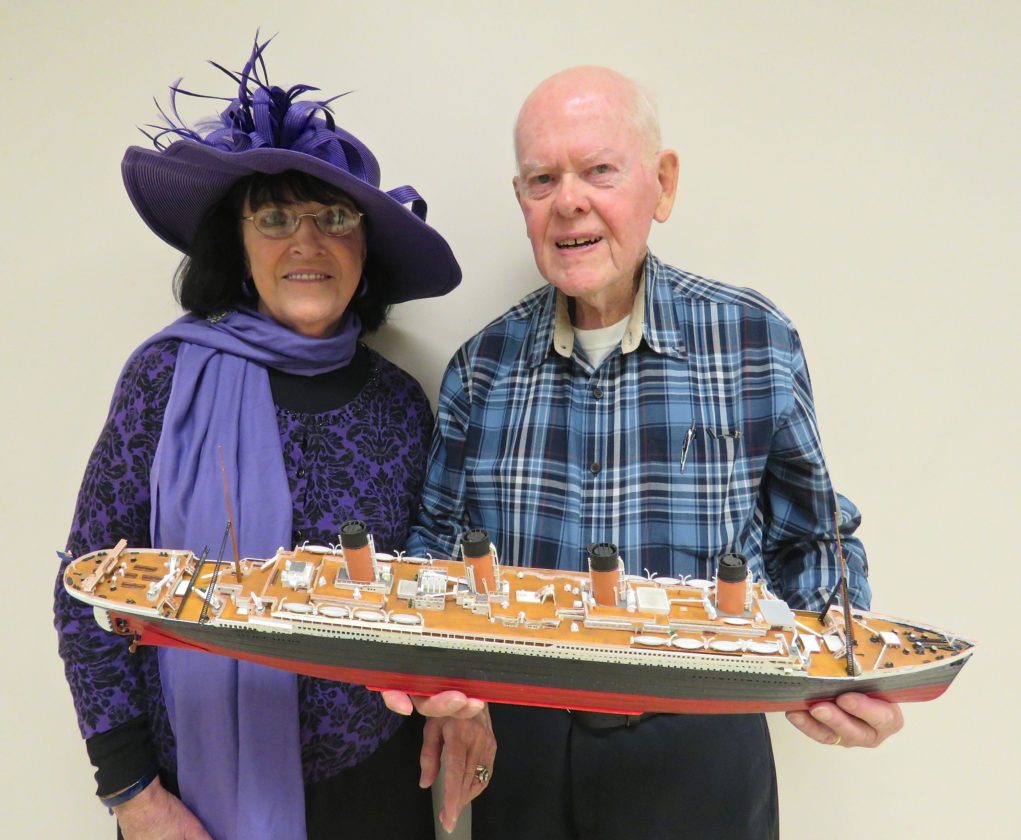 The Randolph Historical Society hosted guest speakers Bob Sutehall and Lorraine Cole, who presented the story of Sutehall’s uncle who was aboard the RMS Titanic on its maiden voyage in April 1912. P-J photo by Deb Everts

RANDOLPH — Members and guests of the Randolph Historical Society had a personal glimpse into the life of a man who was aboard the RMS Titanic.

Recently, guest speakers Bob Sutehall of Angola and Lorraine Cole of Fredonia presented a program marking the 105th year since the sinking of the Titanic. As people listened to the true story of Sutehall’s uncle, Henry Sutehall Jr, who boarded the ship April 10, 1912, the spirit of the RMS Titanic was in the room.

While everyone envisioned this massive luxury ship, Cole appeared wearing era clothing and re-enacting the character Caroline Wick Bonnell, who was an actual passenger aboard the Titanic, and a survivor. In character, Cole acted out a scenario of that tragic night.

Sutehall relived the events of his uncle Henry’s journey around the world and how he ended up on the Titanic that fateful day when it sank. He said Henry and his best friend Howard Erwin decided to take a trip around the world in 1910. When he left, Henry was 24 years old with $50 in his pocket and a violin. He played it for a hobby and had his own orchestra in Kenmore.

“They started out hitchhiking across the United States and hopping a ride in a rail car along the way, or whatever they could find to ride,” he said. “You have to remember there were very few cars in those days.”

Sutehall said as the men traveled, they stayed a few days at each place and earned their way — catching whatever job they could get as they made their way to California. He said Henry’s actual profession was a “carriage trimmer” which, today, would be someone who upholsters the inside of automobiles.

“When they got to San Francisco, they took a boat to Sydney, Australia,” he said. “This is where my uncle Henry used his violin know-how and got himself a job as second violinist in the ship’s orchestra.”

Sutehall said it was a six-week crossing to Australia and when they got there, Henry ended up in Redfern with the Eveleigh Railroad Company, a small family operation that finished-off passenger railroad cars.

“He got a job as a carriage trimmer for this business but, as time went along, Henry and Howard decided to move on,” he said. “When my uncle left the company, they took a clip of his hair and a penny that they nailed up over his workbench as a memento of having him there.”

The two friends ended up in London where they waited two weeks for the Titanic to leave. When the ship departed for its maiden voyage from Southampton, England, on April 10, 1912, it created quite a stir. At the time, it was the largest ship in the world and was widely believed to be unsinkable.

Sutehall said when his uncle boarded ship, Erwin wasn’t around and he figured his friend was in a tavern having a beer before the ship left. So, he took Erwin’s steamer trunk onboard for him.

“Low and behold, he (Erwin) never did show up and the ship went without him,” he said. “When the recovery team was bringing up items from the bottom of the ocean, in 1993, they found Erwin’s suitcase and they could identify it because of a Masonic Lodge membership card in it that had not deteriorated. The suitcase and items in it were on display in different parts of the country. But they never could find out what happened to Howard — until recently.”

According to Sutehall, he recently received a letter about the belongings of Howard Erwin and his whereabouts when the Titanic departed. The letter said Erwin was shanghaied, kidnapped and forced into labor aboard a steamer bound for the Far East the night before Titanic’s departure. He eventually escaped his captors in Egypt and traveled back to Buffalo. His friend, Henry Sutehall, was lost on the Titanic, but Howard Erwin survived.

Sutehall brought a number of items for display including a scale model replica of the Titanic, a piece of coal from the ship with a certificate of origin, and a ribbon that was ceremoniously tossed overboard to relatives on shore as the ship departed.

He also brought several family heirlooms including his family tree, dating back to 1793 in England; a condolence letter, dated Dec. 1, 1914; and a silver locket that were both sent to Sutehall’s grandmother by R.H. Hancock who worked with Henry and Howard in Australia.

“Of course, the shipping company that built the ship said they didn’t need any lifeboats at all. They said ‘this boat (Titanic) has a double bottom and it’s impossible for it to sink.’ Well, we can see it really didn’t turn out that way,” he said.

According to the History Channel, the luxury steamship sank in the early hours of April 15, 1912, off the coast of Newfoundland in the North Atlantic after sideswiping an iceberg during its maiden voyage. Of the 2,240 passengers and crew on board, more than 1,500 lost their lives in the disaster.