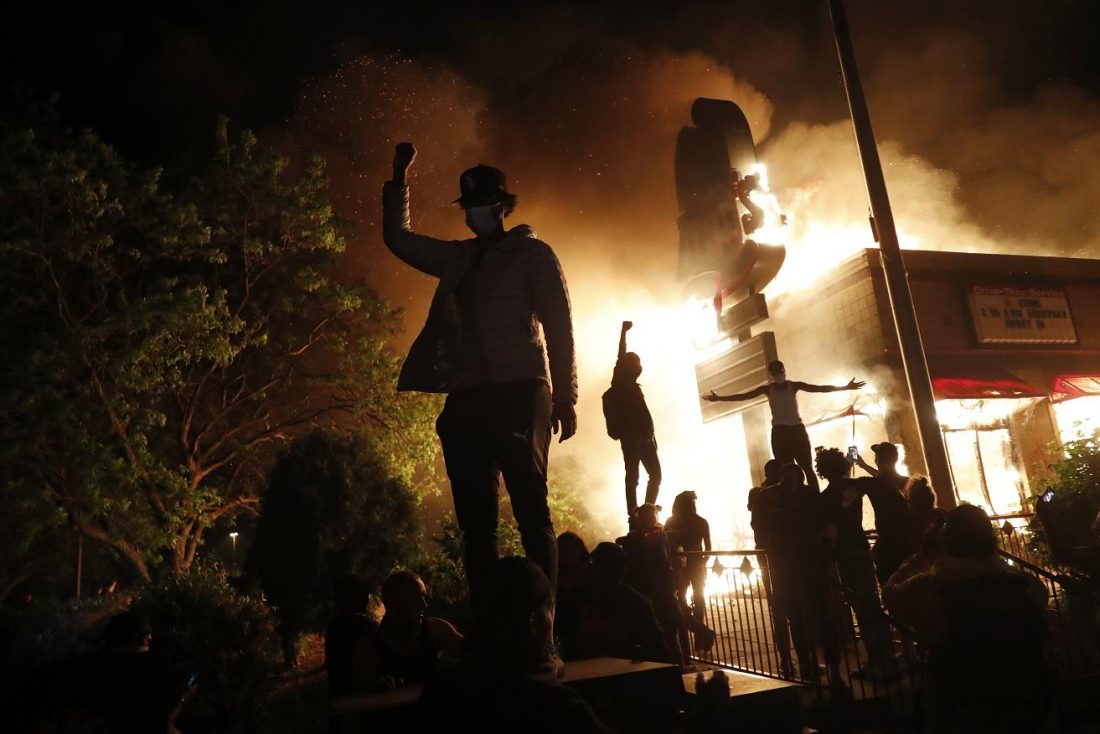 Protesters gather in front of a burning fast food restaurant Friday, May 29, 2020, in Minneapolis. Protests over the death of George Floyd, a black man who died in police custody Monday, broke out in Minneapolis for a third straight night. (AP Photo/John Minchillo)

MINNEAPOLIS (AP) — The police officer seen on video kneeling on the neck of George Floyd, a handcuffed black man who died in custody after pleading that he could not breathe, was arrested Friday after three days of often-violent protests that resulted in fires and looting across parts of Minneapolis.

Public Safety Commissioner John Harrington said state investigators arrested Derek Chauvin, who was one of four officers fired this week, but he did not provide details. The state attorney who would oversee any prosecution on state charges, whose home was also the site of protests, was scheduled to provide an update later Friday.

News of the arrest came moments after Minnesota Gov. Tim Walz acknowledged the “abject failure” of the response to this week’s protests and called for swift justice for officers involved. Walz said the state would take over the response to the protests and that it’s time to show respect and dignity to those who are suffering.

“Minneapolis and St. Paul are on fire. The fire is still smoldering in our streets. The ashes are symbolic of decades and generations of pain, of anguish unheard,” Walz said, adding. “Now generations of pain is manifesting itself in front of the world — and the world is watching.”

The governor cited a call he received from a state senator who described her district “on fire, no police, no firefighters, no social control, constituents locked in houses wondering what they were going to do. That is an abject failure that cannot happen.”

His comments came the morning after protesters torched a police station that officers abandoned during a third night of violence. Livestream video showed protesters entering the building, where intentionally set fires activated smoke alarms and sprinklers. President Donald Trump threatened action, tweeting “when the looting starts, the shooting starts,” which prompted a warning from Twitter for “glorifying violence.”

The governor faced tough questions after National Guard leader Maj. Gen. Jon Jensen blamed a lack of clarity about the Guard’s mission for a slow response. Walz said the state was in a supporting role and that it was up to city leaders to run the situation. Walz said it became apparent as the 3rd Precinct was lost that the state had to step in, which happened at 12:05 a.m. Requests from the cities for resources “never came,” he said.

“You will not see that tonight, there will be no lack of leadership,” Walz said.

On Friday morning, nearly every building in the shopping district around the abandoned police station had been vandalized, burned or looted. National Guard members were in the area, with several of them lined up, keeping people away from the police station.

Dozens of volunteers swept up broken glass in the street, doing what they could to help.