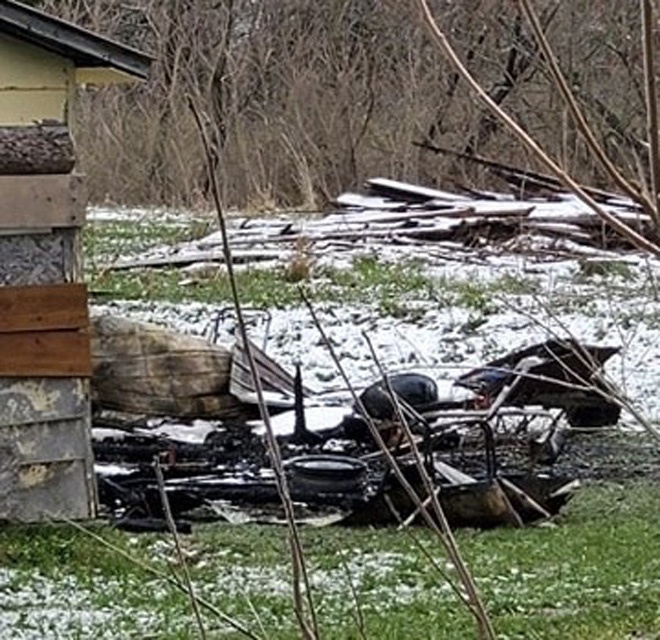 A storage shed was destroyed by fire late Wednesday in the town of Charlotte. The blaze has been deemed suspicious by the Chautauqua County Fire Investigation Team. Photo by Daniel Kohler

SINCLAIRVILLE — A fire that destroyed a storage shed late Wednesday in the town of Charlotte has been deemed suspicious.

Firefighters from Sinclairville were alerted to the blaze at 7314 Rood Road around 10:50 p.m. Fire officials arrived to find the shed, located behind a condemned residence, fully engulfed by flames.

Crews were assisted by Cassadaga and Gerry firefighters, and first responders remained on scene for about an hour and a half.

Capt. Rich Telford of the Chautauqua County Fire Investigation Team said the shed contained a few items but was completely destroyed in the fire. The nearby residence was not damaged.

Telford said an investigation was ongoing Thursday, but did say the fire was being viewed as suspicious.

Meanwhile, Telford said a ceiling fan in a bathroom sparked a fire that damaged a modular home at 2788 Hooker Road near Sinclairville. No one was home when the fire broke out Tuesday around 1:30 a.m., and no injuries were reported.

And a fire that destroyed a trailer Wednesday in the town of Sherman has been ruled undetermined. Firefighters from about a half dozen departments were summoned to the blaze at 8887 Route 430, discovered by its occupants who were able to get out.

“No injuries were reported,” Telford told The Post-Journal in an email. “We had to go with undetermined cause, however, we don’t believe anything was suspicious with this fire. The trailer was a total loss.”