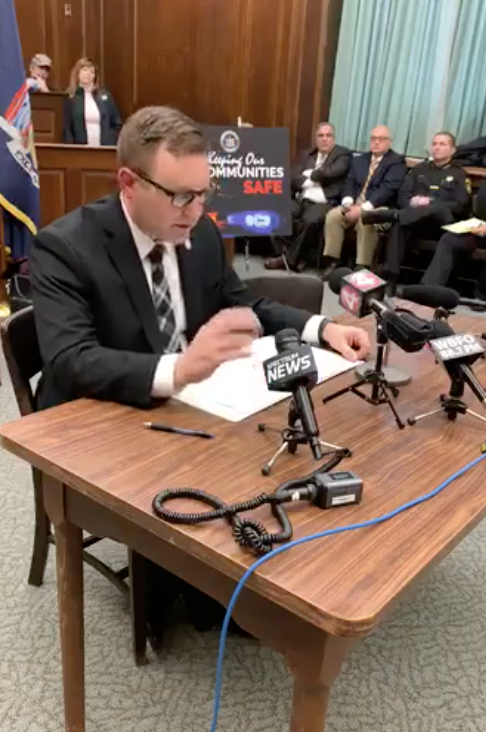 Public officials, including district attorneys and law enforcement officers, spoke Thursday in Buffalo during the first in a series of statewide hearings as part of a Repeal Bail Reform Task Force.

Among those who spoke was Chautauqua County District Attorney Patrick Swanson. The DA said the cashless bail system — which went into effect in New York this year — provides no incentive for those charged with a range of misdemeanor and non-violent crimes to show up in court.

Swanson said calling for changes to the bail reform law is not “fear mongering,” a phrase used often by Ned Barone, the county’s public defender and advocate for the reform measures.

The DA noted that there are 31 local courts in the county. He said cashless bail takes the power away from local town justices who in the past had the ability to impose bail.

“Judges should be given the discretion,” Swanson told the task force, chaired by state Sen. George Borrello. “Those judges know the people who live there. They used a number of factors before considering bail, or at least they used to. … Judges need to be given the tools to make the right decisions.”

Swanson also pointed out that New York state has become one of the safest in the nation in terms of those jailed and charges filed.

“Something was going right here,” he said. “We changed that (with bail reform).”

Some did speak in favor of keeping the current reforms in place. One speaker noted the “disinformation campaign” being undertaken by politicians. He said allowing judges to set bail, as was past practice, opened the door for biases and abuse to come out.

On Monday, Snellings reported that, in the month of January, 119 bench warrants were issued for those who missed their court dates. That’s up from the 69 bench warrants issued during the same time in January 2019.

In a work session meeting of the Jamestown City Council, Snellings said the additional warrants have added to the police department’s workload because officers now have to locate those not showing up for court.