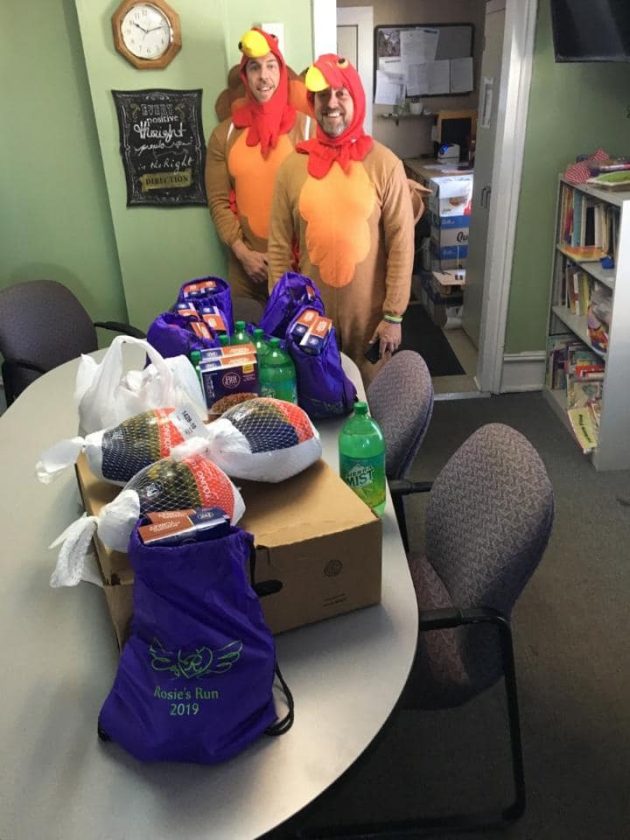 Jamie Billquist, at right, and Matthew Ehrman are pictured shortly before handing out 100 Thanksgiving meals on Sunday. It was the second year in which Billquist donated food in memory of his late wife. Submitted photo

Jamie Billquist and Matthew Ehrman were dressed to impress on Sunday.

Donned in turkey costumes, the pair delivered 100 Thanksgiving meals, including frozen turkeys and several side dishes, to local organizations such as the Salvation Army Anew Center and Conduit Ministries.

However, the bulk of food was hand-delivered by Billquist and Ehrman to local residents throughout Chautauqua County.

“It’s a great feeling,” Billquist said of Sunday’s deliveries, which took between nine to 10 hours to complete. “There are a lot of needy people. I would love to give more, and it really helps me through this time.”

This was the second year in which Billquist handed out Thanksgiving meals in memory of his late wife, Rosemary, who was killed in a hunting accident on Thanksgiving eve in 2017. Last year, he donated 50 frozen turkeys to Love INC. and the Free Methodist Church in Jamestown.

Before Sunday’s journey, Billquist asked for the names and addresses of families in need this Thanksgiving. After receiving dozens of responses, the pair bought the food with money received through the Rosemary “Rosie” Billquist Foundation and assembled the kits at Farm Fresh Foods in Jamestown. From there, the pair drove throughout the county, including to Clymer, Frewsburg and Kennedy, to deliver the meals.

“I definitely want to do it every year,” Billquist said. “Maybe next year we will have one location and have people come by and pick the stuff up.

“I appreciate all the kind words and everything that people have done,” he said of the support he has received. “It’s almost been two years since it happened. I think handing out the food is something (Rosemary) would have liked.”

Keep Statues As Reminder Of Our Not-So-Proud Times