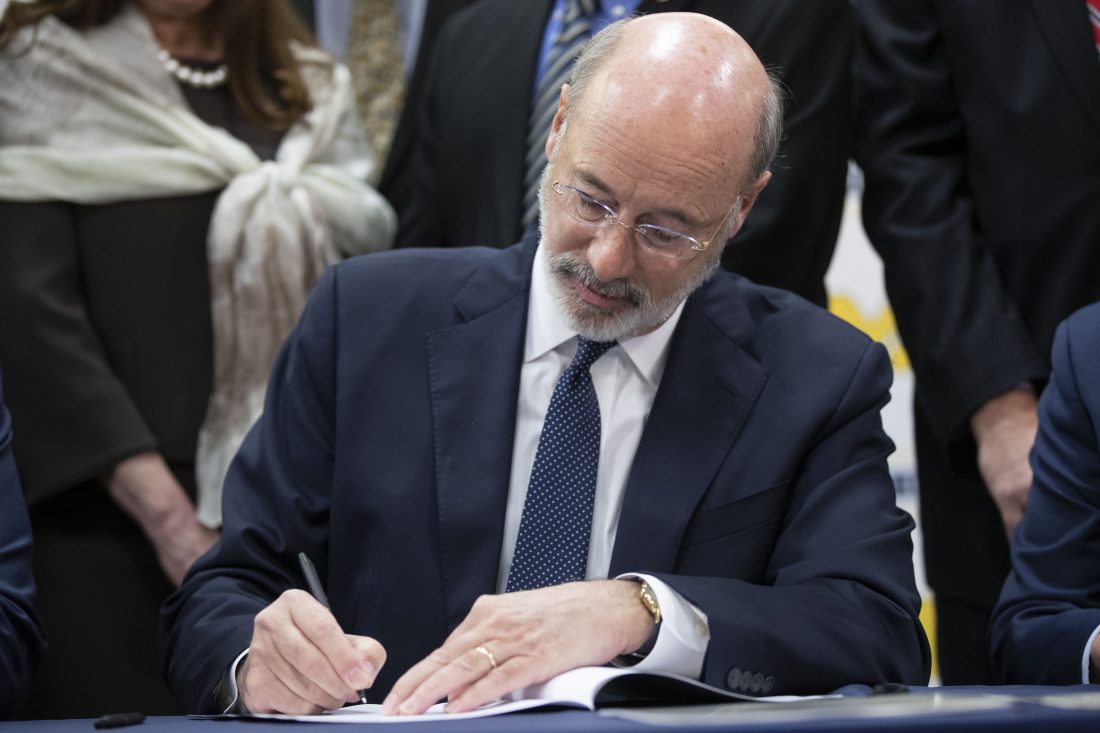 READING, Pa. (AP) — Pennsylvania overhauled its child sexual abuse laws Tuesday, more than a year after a grand jury report showed the cover-up of hundreds of cases of abuse in most of Pennsylvania’s Roman Catholic dioceses over the last seven decades.

The grand jury report spurred several states to change their laws and other states to begin similar investigations.

Wolf said the new laws will help repair “faults in our justice system that prevent frightened, abused children from seeking justice when they grow into courageous adults.”

The legislative package was based on recommendations in last year’s report regarding six of eight dioceses in the state.

Wolf, a Democrat, signed bills to invalidate secrecy agreements that keep child sexual abuse victims from talking to investigators, and to increase penalties for people who are required to report suspected abuse but fail to do so.

Wolf signed the bills at Muhlenberg High School in Reading, the home district of state Democratic Rep. Mark Rozzi, a champion of the legislation and who has spoken publicly about being raped as a 13-year-old by a Roman Catholic priest.

“We know our work is not done today, it’s going to continue,” Rozzi said.

The grand jury report prompted a lengthy battle in the Legislature that pitted victims and their advocates who sought the two-year window to file claims over past abuse against top Senate Republicans, who argued it would be unconstitutional and instead offered the slower alternative of amending the state constitution.

The multi-year amendment process has begun, but the bill must again pass both the House and Senate in the 2021-22 legislative session before voters will decide its fate.

Shapiro, a Democrat, said the eliminated time limits means prosecutors could file charges against only two priests after the report was issued. He said that if the new legislation had applied, some 100 priests could have been charged.

Wolf and Shapiro urged lawmakers to take up the two-year window for lawsuits rather than wait for the amendment process to play out.

The main bill in the package ends any statute of limitations, in future cases, for criminal prosecution of major child sexual abuse crimes. Current law limits it to the victim’s 50th birthday.

About two dozen states have changed their laws on statutes of limitations this year, according to Child USA, a Philadelphia-based think tank that advocates for child protection.

New York raised the victim’s age for which prosecutors can seek a felony indictment from 23 to 28. The law also gave anyone a year starting in August to file child sex abuse lawsuits against individuals and institutions, and civil lawsuits going forward can be filed until the victim is 55, up from 23.