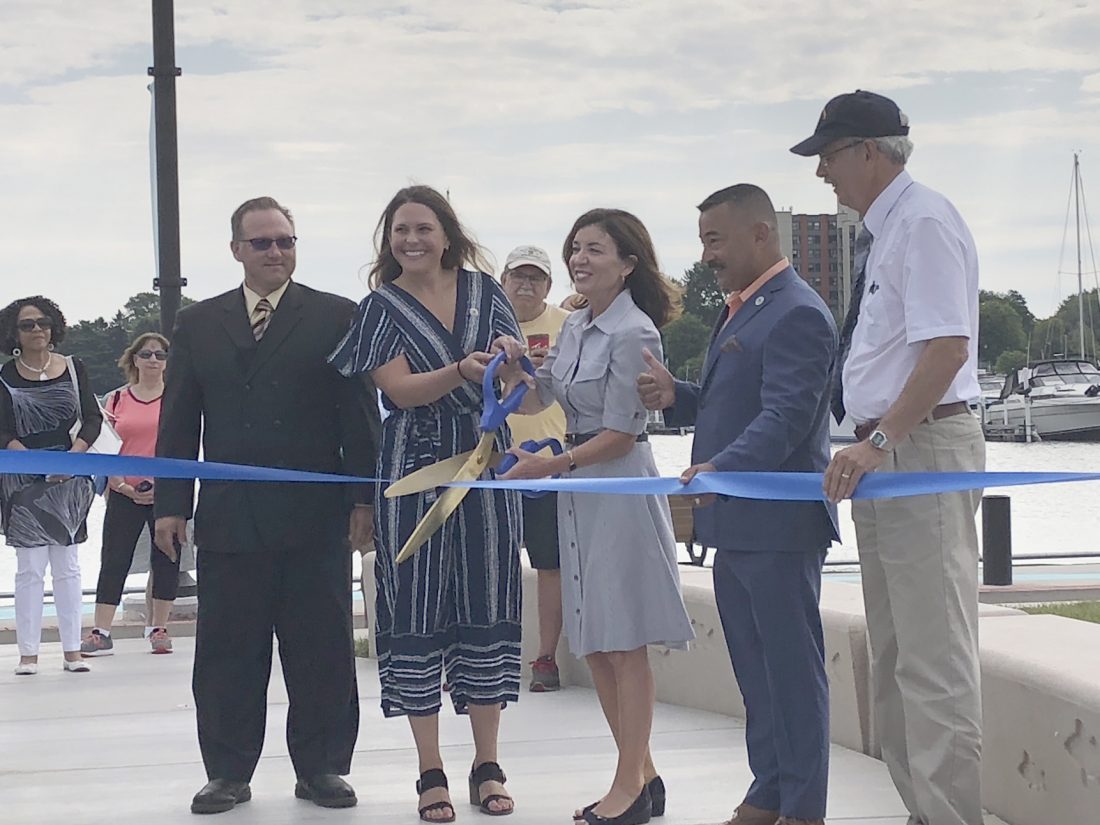 “Establishing accessible, vibrant and sustainable communities is central to our regionally-focused economic development strategy,” Governor Andrew Cuomo said. “These improvements will create beautiful new greenspace and a more pedestrian-friendly area for recreation and events, driving even more tourism and private investment to Dunkirk.”

“The investments made at the Dunkirk Pier and Harbor will help to boost the area as a waterfront destination,” said Lieutenant Governor Kathy Hochul, who made today’s announcement. “Our Smart Growth fund is a recognition of the importance of pedestrian access and growing downtowns across Western New York. These improvements will ensure local residents and visitors have a world-class experience during their visit to Chautauqua County and strengthen the local economy.”

“Thank you Governor Cuomo and your staff for all of the attention and support you have given the City of Dunkirk. I want to thank all of our City Departments that have helped implement this exciting project. To see it completed is a good feeling,” said City of Dunkirk Mayor Wilfred Rosas. “This project will draw more city residents and visitors to our newly enhanced Pier and gives our fishermen an exciting place to host fishing tournaments.”

The Pier Improvements Project has transformed a once solely vehicle accessible pier into a pedestrian-friendly destination, with 50 percent of the Pier dedicated to green space offering more outdoor activities and recreation amenities, increased seating, and improved connections between the pier and waterfront trail system. The waterfront has trails to the east and west of the Pier, where there was previously a disconnect between both sides, creating better trail connectivity. It also provides increased amenities for fisherman and boaters such as additional seating, new tie-up railings, new lighting, and new safety ladders.

This project is a part of Dunkirk’s $2.5 million grant provided by Empire State Development’s Smart Growth Community Fund, awarded in 2017. The project is one of three major revitalization projects in the city supported by this grant. The private development of Pier 30, which is expected to be completed in fall 2019 at the entrance of the Pier, will provide an area to enjoy drinks and snacks while experiencing the picturesque views of Lake Erie. The Pier Improvements Project and Pier 30 will better connect Dunkirk’s Downtown to the waterfront through the third funded project along Central Avenue. The Central Connection Project includes four major intersection improvements, new crosswalks, paving, bike lanes, striping, banners and signage to better connect the City’s waterfront, Fredonia College and the Village of Fredonia. This project is 75% complete and will be finished in fall 2019.

In 2017 and 2018 in Western New York, applicants to the statewide DRI competition not selected as regional winners were automatically eligible for funding through the Smart Growth Community Fund, a $20 million initiative to fund ready projects in municipalities that revive traditional main streets, preserve historic buildings and foster mixed-use private investment, and encourage walkability and increase access to waterfronts and green space. Funding has been awarded to eight Western New York communities, each receiving up to $2.5 million. Funding awards were recommended and approved by the WNYREDC. Projects selected within each community are shovel-ready and can be completed within one to two years.

Assembly Member Andy Goodell said, “The new Dunkirk Pier will bring more pedestrians, bikers, boaters and fishermen to the waterfront. I am pleased to support this project, which is an important piece of an improving economic development picture in the City of Dunkirk. We look forward to more improvements on the shores of Lake Erie in the future.”

County Executive George Borrello said, “The Dunkirk Pier is an important recreational asset and economic driver for this city and the surrounding area. These much-needed improvements will increase visitation and enjoyment of our Lake Erie waterfront and encourage people to frequent the central business district. I thank Governor Cuomo and the WNYREDC for the funding to move this project forward.”