YMCA Names Board Member Of The Year 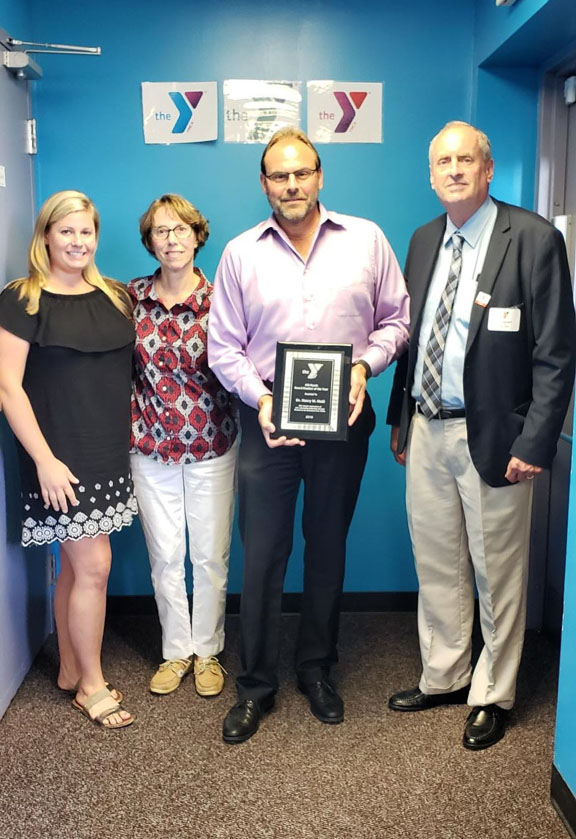 Dr. Henry Mole, pictured in middle, was named YMCA Board Member of the Year, and was presented his award by Mark Eckendorf, chief executive officer of the Jamestown Area YMCA, at the Y’s Annual Awards Banquet. Also pictured are Bill Myott’s daughter, Sue and fellow board member John Healy’s wife, Betsy. Submitted photo

The Jamestown Area YMCA named Dr. Henry W. Mole as “The Bill Myott Board Member of the Year” at the YMCA’s annual awards banquet, held at the YMCA’s downtown location Aug. 29.

“When there is an issue, Henry is one of the first to try and find a solution, even if it means doing a little extra work in his free time. Mole’s enthusiasm can often be contagious and he’s made a tremendous difference for the Y,” said Mark Eckendorf, the YMCA’s chief executive officer. “I don’t think there isn’t anything Henry wouldn’t do for the Y. He’s involved in all of the fundraisers hosted by the YMCA. Henry, has demonstrated his loyalty to our organization through his work ethic, as well as his desire to go above and beyond expectations. He volunteers not only his time but has a genuine devotion to help others.”

The Bill Myott award was established in remembrance of the longtime board member, who had passed away a few years ago. We appreciated all the hard work and commitment Bill put forth here at the YMCA and wanted to name this award after him.

Mole, because of his dedication, hard work, and commitment to the YMCA he seems like a perfect recipient to this award.

“I think Henry is an absolutely perfect choice for this year’s award. I could not think of a more dedicated and committed person then Henry Mole. Henry has joined the board a number of years ago and has worked tirelessly to help the YMCA’s mission. At every event, at every fundraiser, and at every community gathering, Henry has been there to support the YMCA. Henry’s energy and passion toward the YMCA, the YMCA mission, and the children of our community, is second to none. I can recount countless examples of Henry going about the call of duty to assist the YMCA,” said George Panebianco, the President of the Board of Directors for the YMCA.