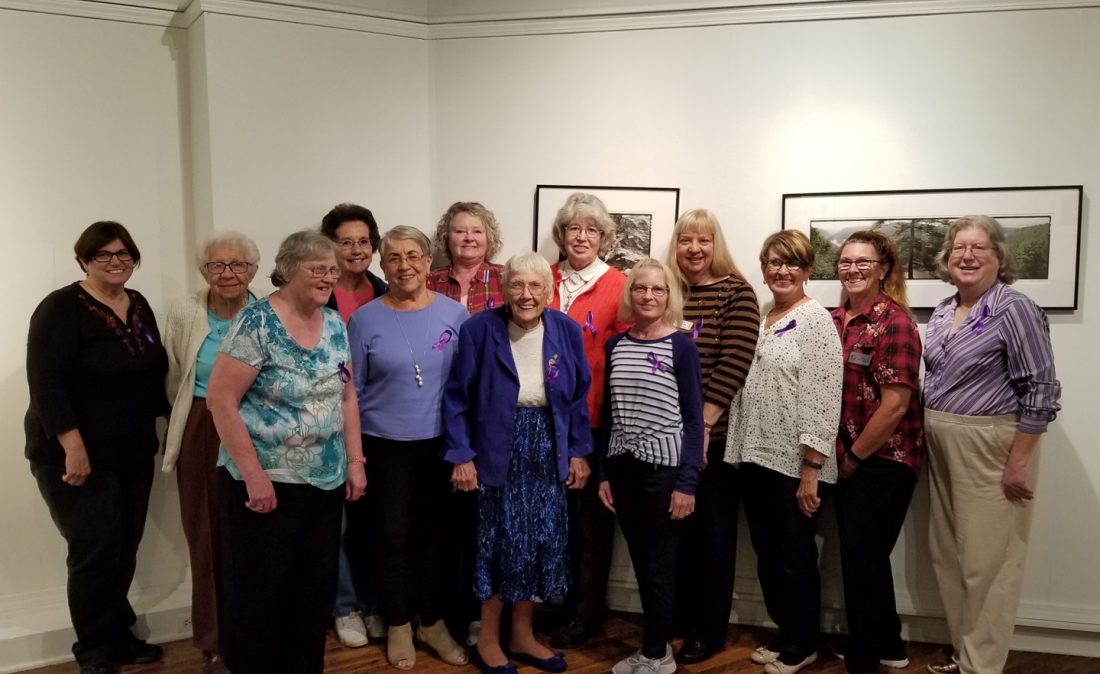 The monthly meeting of the Benjamin Prescott Chapter of the National Society of the Daughters of the American Revolution was held at the Patterson Library in Westfield. There were 13 members present. The meeting was called to order by Regent Brenda Johnson.

The opening ritual was conducted by Regent Johnson. Vice-Regent Roxanne Wood read the DAR President General’s Message. This message stated that Oct. 11 is the National DAR Day of Service. October is also National Domestic Violence Month. Members are asked to assist communities with awareness of domestic violence in families. Regent Johnson passed out purple ribbons to signify solidarity for this movement. It was noted that Oct. 24 is Domestic Violence Awareness Day and the purple ribbons should be worn that day. The President General’s Message also reminded members to wear red every Friday to remember those who are deployed overseas so that we may enjoy our freedoms.

Chaplain Elizabeth Sedlmayer read the DAR National Defense article. This article, entitled “Military Working Dogs Honored with New Stamps,” spoke about the new red, white, and blue stamps which honor the military dogs. These stamps will help build awareness among the public of the importance of military dogs.

Members bought gift cards which were sent to the VA Hospital in Buffalo and to the Dunkirk VA. These cards will then be given to the veterans for their use.

Regent Johnson will accept new and gently used books for literacy. Anyone with books should give them to Johnson and she will take them to the next District VIII meeting.

Co-Vice Chair Bonnie Larkin reported that there will be a Pom Pom bus to Constitutional Congress from June 23 to 28, 2020. Plans are still in the works and Larkin will provide more information as it becomes available.

Regent Johnson passed around the article of the chapter’s 120th. celebration which was printed in the Daughter’s Magazine in the September/October 2019 issue. Each chapter is allowed to submit one article per year to the magazine.

The chapter’s Christmas Party will once again be held at Webb’s Captain’s Table Restaurant in Mayville, New York. It will be on Saturday, Dec. 7.

Ideas for next year’s field trips were discussed. Some events mentioned were to visit the Robert Jackson Center in Jamestown, NY, to take a canal trip up the Erie Canal, to visit the Naval Park in Buffalo or to visit the Roosevelt Inaugural Site in Buffalo.

Regent Johnson mentioned that the chapter is required to have an Open House each year. Elizabeth Sedlmayer said she would check on available dates at the Barker Library in Fredonia and report back at the November meeting.

The next monthly meeting will be held at the Patterson Library in Westfield on Thursday, Nov. 7, at 1 p.m.

Those who had an ancestor who fought for freedom in the Revolutionary War and would like to join, please call Barbara Pietro at 716-392-1166 or email jbpietro@gmail.com.