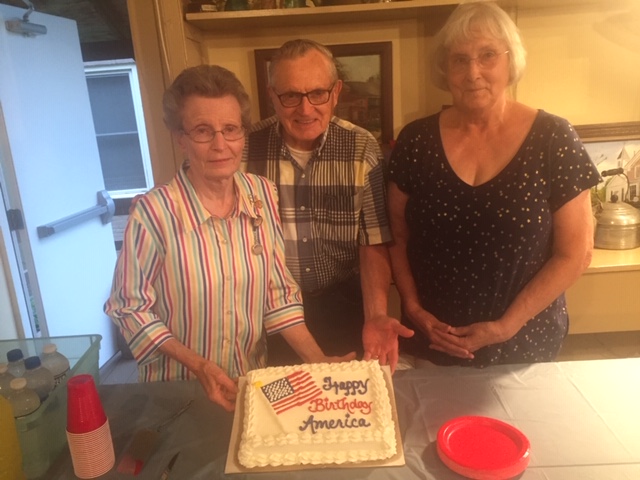 A patriotic meeting was held by members of the Valley Historical Society. A patriotic cake baked and decorated by Ranee Kaus of Cassadaga is shown by Diane Shaw, chaplain for the Cassadaga American Legion Post 1280, member Bill Hulett, and vice president Betty Jean Ridout. Submitted photo

SINCLAIRVILLE — Members of the Valley Historical Society of Sinclairville met at the museum for a patriotic meeting and a patriotic cake.

Diane Shaw, chaplain for the Cassadaga American Legion Post 1280 was the speaker on the “Patriotic Moment.” Shaw told a World War II account of four chaplains on a ship in February 1943 and their bravery and sacrifice. It was a cold February morning, and their ship was attacked and sinking. These four chaplains offered prayer and encouragement, along with their own gloves, and life preservers.

Vice president of the historical group, Betty Jean Ridout, conducted the meeting by leading all in the Lord’s Prayer and the pledge of allegiance. Secretary Bonnie Larkin read the minutes of the previous meeting, and treasurer John Sipos gave the financial report.

The Valley Historical Society will have a historical display at the upcoming Chautauqua County Fair in the Floral Hall. Plans were discussed for the annual quilt show on Aug. 3 and 4 in the museum. Quilts for the show will be accepted on Friday, Aug. 2, at 6 p.m. in the museum.

The annual Sinclairville History Fair is on Saturday, Sept. 14, from 7 a.m. until fireworks at 9 p.m. The day will begin with a breakfast in the Sinclairville Fire Department dining room at 7 a.m. There are many activities during the day, and a grand parade at 10 a.m. The museum will be open all day, and in the village park are food stands, crafters and vendors. Music will be played during the day by various groups. The history fair is open to everyone at no charge.

The next meeting of the Valley Historical Society will be on Tuesday, Aug. 6, at 6 p.m. This is the annual summer picnic held at the Sinclairville Ballpark picnic area. All those attending are asked to bring a dish of food to pass and their own table service. It is also the annual “Treasure Trove” and those attending are encouraged to bring an old item for show. Everyone is welcome.