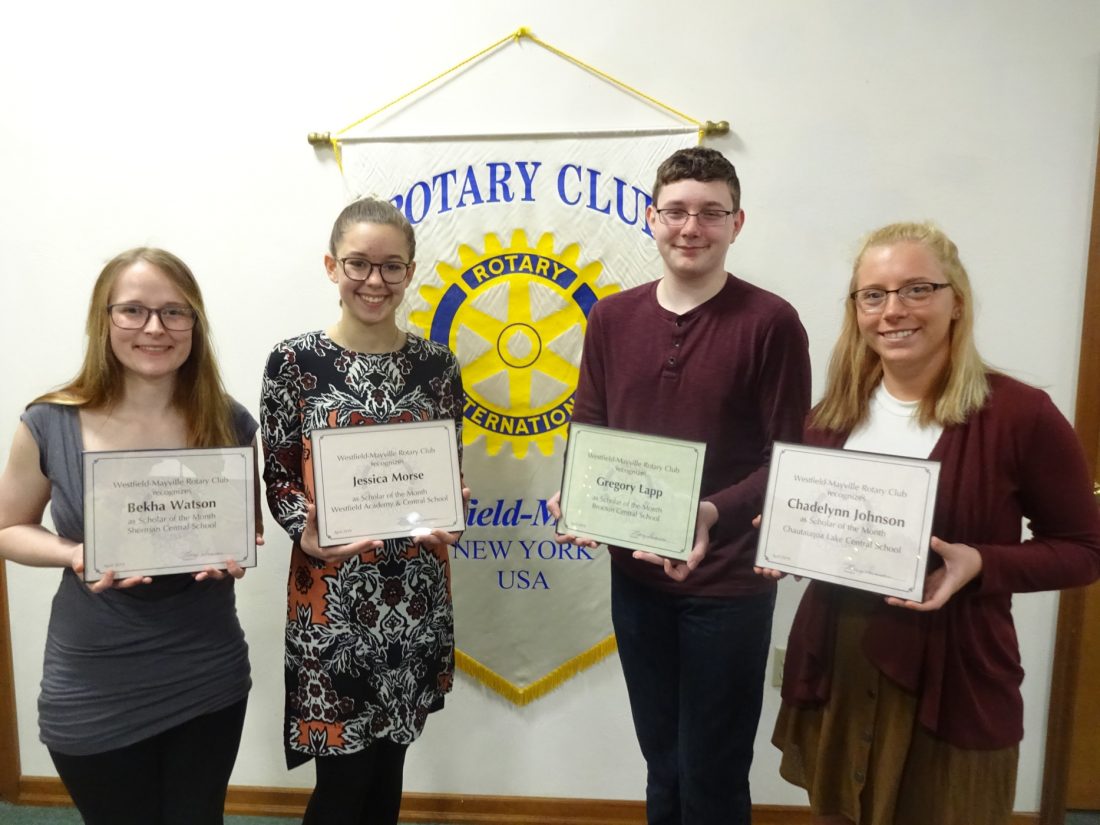 Bekha Watson, a Sherman Central School senior who resides in Sherman, is the daughter of Dennis Watson, Annie Watson and Will Adams. Throughout her years at SCS, Bekha Watson has maintained a GPA ranging from 93 to 98, and she has been on the honor roll since fifth grade. She is a proud member of both the National Honor Society and the Hewes Center BOCES National Technical Honor Society. Watson has been enrolled in the Vocational Tech Cosmetology Program at the Hewes Center for two years.

This fall Watson will be attending Jamestown Business College, where she plans to get an associate’s degree in accounting and a bachelor’s degree in business management. She says that she is excited to be attending JBC and that it is the perfect school for her.

Jessica Morse, a Westfield Academy and Central School senior, is the daughter of Dale and Jennifer Morse of Westfield. During her high school career, this scholar has been enrolled in six Jamestown Community College courses, and at the end of her senior year she will have earned 21 college credits through JCC. Also, she will earn three college credits through SUNY College at Buffalo.

In addition to other high school courses, Morse is enrolled in two Advanced Placement courses. She will graduate this June with a Regents Diploma with Advanced Designation with Honors with Mastery in Mathematics and Mastery in Science.

Also, Morse is a four-year member of the Chautauqua Lake Swim Team, and she played varsity tennis for two years. During her junior year, she was selected as a WACS Student of the Month. She is a member of Faith, Hope, Love Bible Study. Morse is employed at Bethany Baptist Camp, and she is active in the Westfield Baptist Church. This fall she will attend Jamestown Community College to begin working towards her goal of becoming a chiropractor.

Gregory Lapp, a Brocton Central School junior, is the son of Christopher and April Lapp of Brocton. He is currently academically ranked first in his class, and he has regularly achieved high honor roll throughout his high school career. By the end of his junior year, Lapp will have earned 12 JCC credits, and he hopes to earn many more by the time he earns an Advanced Regents Diploma at the end of his senior year.

In his freshman, sophomore and junior years, Lapp was the secretary of the student council, and he has aspirations to be its president next year. Also, he is the treasurer of both the National Honor Society and the yearbook. He is an active member of both the BCS Envirothon Team and the Rotary Interact Club, which is a volunteer service organization for high school students.

After he graduates from high school next year, Lapp plans on attending SUNY Fredonia. He aspires to eventually attend Albany University of Pharmacy and Health Sciences to study pharmacy and then become a pharmacist.

Chadelynn Johnson, a Chautauqua Lake Central School senior, is the daughter of Doug and Amy Johnson of Dewittville. This scholar has worked very hard and pushed herself to succeed in the more rigorous college prep courses at her school. She has improved her GPA more than eight points since the 9th grade. This June she will graduate with an Advanced Regents Diploma, and academically in the top 20 percent of her class.

Johnson consistently earns the merit or honor roll each quarter, and she is a member of the National Honor Society. She has received recognition for her excellence in global studies, and she has been named as a CLCS Student of the Month.

Outside of school, she has participated in travel softball leagues, summer basketball leagues and youth group. She volunteered her time for the Salvation Army as a bell ringer, the American Legion Ladies Auxiliary, the American Legion Fourth of July, and at the LECOM Health Challenge golf tournament. She has been employed at Steadman Corners cafe, and most recently for the Mayville Lakeside Park Program. After graduation, Johnson is planning to attend Youngstown State University, where she will major in Exercise Science. In the future she plans to earn her doctorate in physical therapy.

The Winifred Crawford Dibert Boys and Girls Club of Jamestown recently announces the December Youth of the Month. ...