A customer places an order while other customers dine in at Arctic Bites Restaurant, 764 Foote Ave., in the South Side Plaza. The restaurant also has glass partitions, so customers can see how their food is being prepared. P-J photo by Michael Zabrodsky

If you have had the delight eating Tai ice cream, then you know it is just as delightful watching it being prepared.

Both of those can be experienced at Arctic Bites Restaurant, located at 764 Foote Ave., in the South Side Plaza. 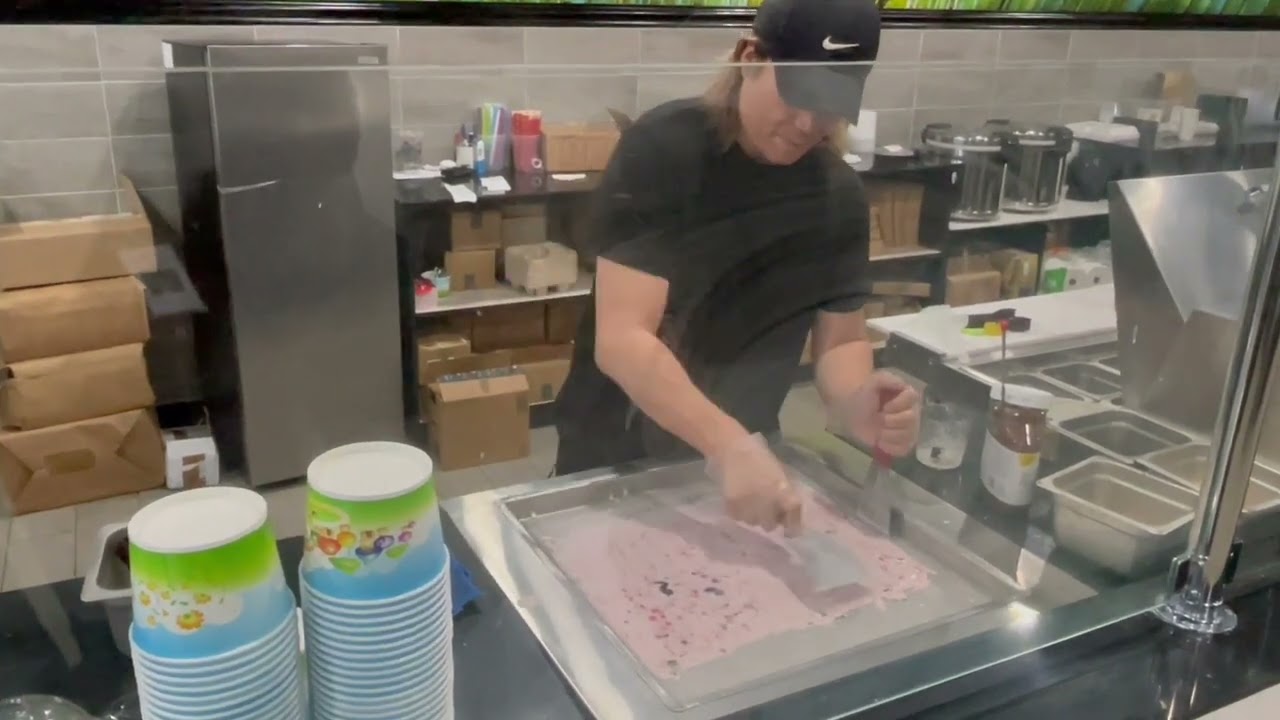 But that’s not all. The restaurant also has available poke, sushi, hibachi, boba or bubble tea, and chicken wings — korean style or buffalo style.

You may call the food balanced and fresh.

“We brought our kids for the ice cream, and we are coming back for lomein and pork ramen,” said Frewsburg resident Rachel Roushey.

“(In) this (the Jamestown) store, I added everything together,” Wong said.

On a sign outside his front door is the explanation of poke, so customers understand what it is. The sign reads “poke means ‘to slice or cut’ in Hawaiian and refers to chucks of raw, marinated fish — usually tuna — which is then tossed over rice and topped with vegetables and umami-packed sauces. It’s a traditional Hawaiian dish, known as the poke bowl, has already been around for centuries. The best creative you can get with it. Though raw fish is the most important ingredient in a poke bowl, you can also swap it for chicken, grilled fish, or tofu as a vegan alternative.”

According to kikkoman.co.uk, “Umami is one of the five basic tastes, along with sweet, sour, salty and bitter taste sensations. It’s most commonly defined as ‘savoury,’ but the characteristics of umami can also be described as ‘meaty,’ ‘complex’ or even just ‘deliciousness.’ A Japanese word, umami is pronounced: ‘oo-ma-mee’ Sometimes umami is wrongly thought to mean a harmonious combination of flavours in a dish, but in fact umami is completely separate to the four other taste sensations. Our taste receptors pick up umami from foods that contain high levels of amino acid glutamate.”

“They (customers) want more healthy (food). Poke bowls are not made with any oil,” Wong said.

Although they are available, Wong has broken away from just offering traditional chicken wings or buffalo-style wings. Korean style chicken wings are also available which, Wong said, are crispier.

“The outside (of the wing) is more crispy,” Wong said.

Bokksu.com refers to hibachi as a Japanese style of cooking where the food is prepared over an uncovered, flaming grill. So, for example, a customer could order hibachi chicken, hibachi steak, or hibachi shrimp, or other items thatcan be prepared that way.

Al of people want to see how the ice cream and the rest of dishes are made, so there are glass partitions that allow customers to see how their food is prepared.

He said in the ice cream, no sugar is added. The sweetness comes from the toppings that the customer would choose. Wong said the ice cream and boba tea are big sellers. Boba tea is, a drink that includes tapioca or fruit-flavored pearls, gobatea.com said. “But, that just scratches the surface. When someone says ‘Boba tea’, they are referencing a traditionally cold-served beverage that has a tea base, a milk or fruit flavor, and edible pearls (the ‘boba’ in boba tea) inside a cup. Boba tea has many aliases which tends to confuse the heck out of people. You may have heard one or many of these phrases used, but you should know they all mean the same thing: bubble tea, pearl tea, bubble milk tea, boba, boba fruit tea or tapioca tea. Boba Tea has become increasingly popular over the past few years. This is in large part due to the new and unique consumption experience of having tasty edible pearls in a beverage,” the website noted.

“It’s a lot more fresh,” Wong said of the Tai ice cream. “It’s tasty and more balanced. Every time it tastes different because it is fresh.”

For more efficient ordering, every dish has a number assigned to it.

When Governor Kathy Hochul came to Dunkirk this past week to announce a $10 million Downtown Revitalization ...

Nerdwallet: How To Create A Retirement Glide Path

In investing terms, a “glide path ” describes how a mix of investments changes over time. Typically, the mix ...

Metzger Retires From IDA Board

From Scratch: Ecklof Bakery Named Best Of Best For 2022

Four Expenses For Parents To Rethink In 2023

When inflation rises, child care expenses do, too. If you’re a parent, you may be hoping to get a little ...