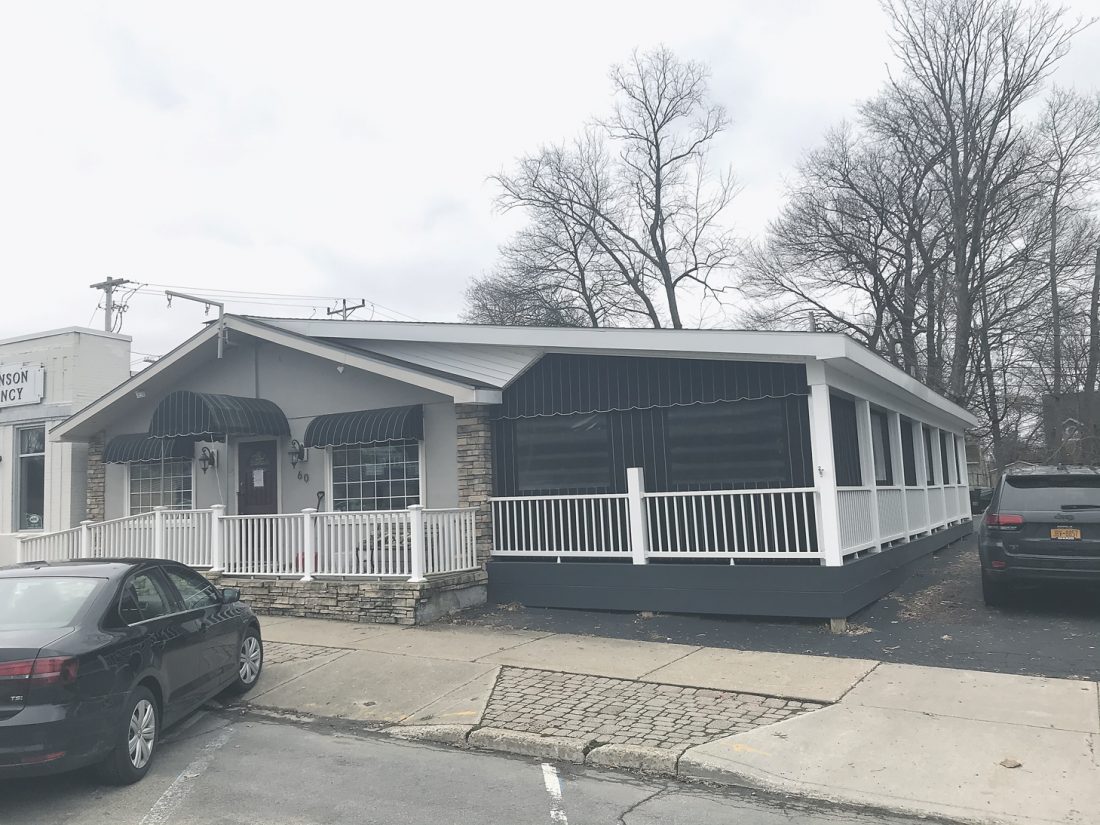 Bruce Stanton plans to open his new restaurant at 60 Chautauqua Ave., Lakewood, within the next month, offering diners a personal take on New American cuisine. P-J photo by Jay Young

LAKEWOOD — A new restaurant in the village of Lakewood is expected to open to the public in short order.

Three weeks ago, Bruce Stanton took official ownership of the former Craft Burgers and Brews building at 60 Chautauqua Ave. Stanton was granted a special use permit for the premises in the fall, and will bring a lifetime of culinary and management experience to his new venture, “Stella.”

“You’ll see ‘Stella’, up on top (of the sign), and offset on the bottom you’ll see ‘A Kitchen And Bar,'” Stanton said. “We took formal ownership three weeks ago. We’ve been interviewing employees, we’ve hired a few. By the end of this week we’ll have hired between 85-90% of the staff, or made offers to probably 90% of the staff. We do plan to be open in just about a month.”

The menu and vibe patrons of Stella can expect to enjoy will be a reflection of Stanton’s long history in the industry, which stretches back to the Gristmill Restaurant in Jamestown in 1981. After that, for 25 years he was in charge of food service and hospitality at the Chautauqua Institution’s Athenaeum Hotel while also handling the hotel’s general manager’s duties. Stanton’s resume also includes a recent position at Moonbrook Country Club.

“I’ve been in this business a very long time, but until you are the one owning it–there are a lot of steps to make, you try not to miss anything,” Stanton said. “Our main objective is to provide the community with another dining option. Something where you will see New American cuisine as well as traditional items. We’ll have the higher-level entrees, but we’ll also have some creative salads, some sandwiches. So the menu is going to be diverse in the sense of, what the offerings are.”

The fit for Stanton and his wife Laurie in Lakewood is a great match. Both bring extensive experience in hospitality and tourism, and the couple have been residents of the village for close to 15 years.

“My wife Laurie works for the National Comedy Center,” Stanton said. “She is completely ingrained in tourism for Chautauqua County. She knows so much about bringing people into the region and what tourism in Chautauqua County means to the economy here. We want to be able to provide a dining opportunity for both our local patrons that support our local businesses on a very regular basis, as well as those coming in and spending a few days here or maybe a couple of weeks here because it is a great place to visit. We want to provide another great dining option.”

In addition to questions about the new menu of Stella, Stanton has also been asked about the name. Over the course of many years of travel to two favorite food cities, New Orleans and Charleston, S.C., a trend started to emerge.

“My wife and I seem to gravitate towards restaurants that have girls names. The name draws upon a number of different things,” Stanton said.

When thinking back on names that they might want to use for their new venture, the couple remembered the time they spent at the Pontchartrain Hotel in New Orleans.

That landmark is where playwright Tennessee Williams penned “A Streetcar Named Desire,” which features the character Stella Kowalski. Why not “Stella?”

Diners will still recognize the bones of the building from former tenants, with Stanton adding his own personal style to the mix.

“The building was well taken care of, so there wasn’t a lot to be done. It was more of, some fresh paint, a fresh kind of design inside,” Stanton said.

The capacity during the cooler months will be just under 70, between tables and the bar area, while that will grow to approximately 100 with the additional seating available on the exterior deck.

As longtime residents, the Stantons are excited by the opportunity to join Lakewood’s business community as well.

Stella may feature a piano player or an acoustic guitarist on some occasions, but Stanton intends to leave the live bands and DJs to other establishments.

“We want to have something that compliments the whole vibe of Lakewood,” he said.

In addition to hiring staff, Stanton and his team are also implementing a new point-of-sale system and tying up a variety of odds-and-ends before opening.