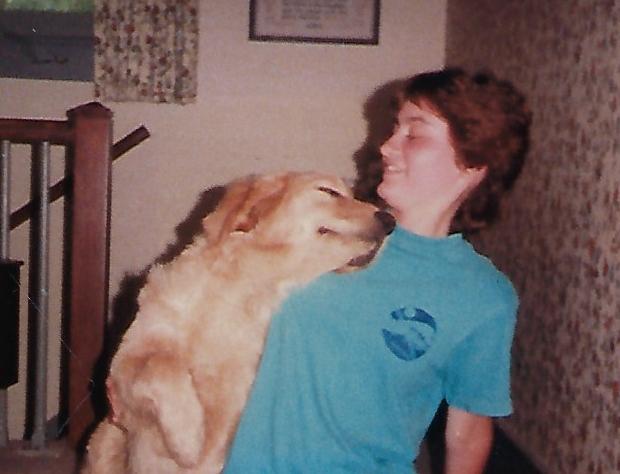 Another one hundred pounds of puppy food to carry up the hill once the snows stopped.

Lowering the price seems all I can do. And a girl in Jamestown just had a litter of twelve so things won’t get better.

March 9 is too cold to allow the kids out for more than 15 minutes. It’s below zero (again). And how can I sell anything if these blizzards don’t stop?

By the end of their second month, I’m telling all who’ll listen that they’re not only adorable but truly gorgeous. They’re so full of love and anxious to please. I only hope they get good homes soon.

A week passes and I write “Is it possible? The pups seem to be getting even cuter.”

And the ads are working. A young engaged couple from Erie took Butterball and a man came shortly after for Edsel. Anne is heartbroken about losing the one and I, the other.

Then, March 20, it warmed up so that I didn’t even need a sweater to take the pups out to play in the yard in the morning and back in the evening.

The Erie buyer called, terribly irate after a friend told him his female was really a he. He’ll take her to his vet tomorrow. I wait five days, it’s a girl for sure.

A deposit next for Beth’s Benjamin. Down to six and back they go for shots. The vet found it far easier to give the injections in the car. One funny little pup insisted on chewing on his brother’s neck when I put a collar on to mark our favorite. I figured it might be the collar so I switched it to an old one. Same thing. The pup was impossible until I gave him the other collar — much too huge and bright orange, and he’s pleased as punch.

Rough-housing in the yard for an hour and I thought one had broken a leg.

I mark the end of the third month.

Took the chaise out to dog-sit in the heavenly sun. The pups, finding my lap too warm, quickly solved the problem by jumping in the pond before hurrying back to my lap. Cold and wet, just for me.

One pup is hobbling around. Two others stay close to their wounded friend who’ll take nothing but a little broth. The vet said he’d been bitten and gangrene has set in. They’ll try medicine and know in a day or two. By the next day the word was, even if he recovers, he’ll lose that leg. Such a devastating choice — not the way I wanted to reduce their number.

Sold a pup. The extremely curly-backed male is going to a delightful and most enthusiastic young man from Westfield, a sixth grade teacher buying it as a surprise for his son. They’ll have fun tonight.

All the $325 Jamestown litter is sold.

A man from Jamestown picked Hathaway, so named for his weepy eye. I didn’t expect to see that one go but he insisted. It was his only choice. I took Hoover out for the first time with a choke collar and lead. Once he stopped bucking, he was a dream to work with. Looks like he’ll be ours, though I can truthfully say I’ve had no favorites until now. With only three to go, I can rate my choices.

A youngish couple, after much deciding, picked one. A woman from Frewsburg called for the last but never showed up. But, the following day, I sold Orange Collar. That’s what happens when the sun finally shines. He went to a Warren family and will be a pickup-truck-type of dog but Anne knows the son and approves, so it’s OK.

Beth is helping me clean the dining room.

Hoover is trained. All papers and barricades have been put away.

(Hoover truly did vacuum up anything. Sadly, it killed him. A small plastic charm I’d never seen, before it was later returned, got caught in his throat. After a terrible time with useless treatments, he died in surgery.)

I watch “uneventful” May pass in relative silence.