More Puppy Tails: Counting Down As They Leave 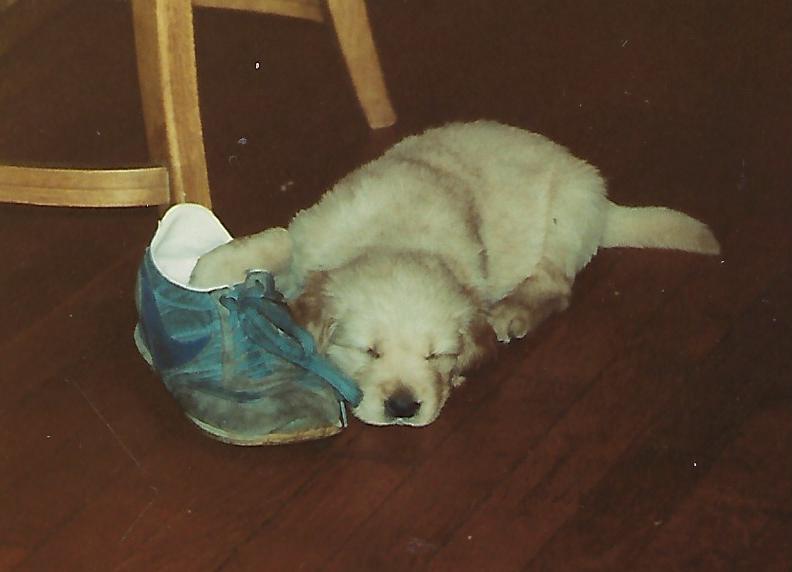 As you may recall, I watched thirteen puppies being born on the tenth of January in 1984. Two succumbed almost immediately. That still left me with eleven healthy golden retriever youngsters.

Little did I quite understand that my tale was only to begin. What does one do with eleven puppies in bleak midwinter?

It wasn’t until six days later that — thanks to a volunteering neighbor — we got all pups and mother Honey to the vet’s by nine o’clock. He told me twins, that is two born in the same sac are very rare. I could never identify them again.

Dewclaws were removed. Why? I wonder. I really don’t know except it does seem a standard operating procedure. That same day I took a call from a stranger who was eager to buy one. He likes the dogs of Virginia Paine, the owner of Honey’s “husband.” Sure impressed me.

My daughter Anne, who’s measuring, claims the pups are growing half an inch a day. I wouldn’t doubt it. But helpless? Hardly. One has already climbed over the five inch barrier around the whelping box.

By the end of the first two weeks, the pups were definitely walking — if only a step and a plop — and their eyes are all open: tiny round black beads. Then they started yipping with occasional high-pitched barks. So funny.

Just eighteen days (less than three weeks old) and the first is sold, a smaller girl. It was love at first sight for this family with two darling children.

Friends and family continue to visit frequently — what a draw, a roomful of “teddy bear” puppies — so all are getting lots of handling and affection. Of course they do keep getting cuter and cuter.

Four weeks and I’ve started some of my babies on oatmeal and formula. Teeth are coming in, convincing Honey her nursing days will soon draw to an end. I watch her eat and vomit, getting the kids used to semi-solids. Miraculous if messy.

Mrs. Paine comes back in early February. She says all are “good” which is happy news. When I asked about keeping a male, she found three so similar she couldn’t pick. She’ll return in another week or so to help with our decision. Two neighbor kids come to play with their pups. The attention delights me.

As all grow so does their activity and waking hours. One escaped to the kitchen where I found her eating the food in Honey’s bowl! So what’s with all the watery puppy chow? We’ve passed the one-month mark. All’s well.

An ad was first placed in the Erie paper and then in Warren where I lived then. Most responses ask how much and hang up. These are well-bred pups — not cheap.

February 25. First pup to go. I know the family and the son’s been a regular here to play with his puppy. And another family comes at seven to take theirs. It seems almost lonely with “just” eight left.

The pups are getting real downy by a month and a half. They hit the papers more often than not and I’m told one of those that left three days ago is already going outdoors to go to the bathroom. Ads in Bradford, Titusville, Jamestown and here — and now it won’t stop snowing. Help . . . it’s time. At the same time an ad’s paid off for Beth who sold all the rabbits she didn’t want, bringing her back to “just Alfred.”

The six males went back to the vet’s in early March. Their weight must be double that of the girls who went last week. With his permission, they can all go play in the snow — on the front porch. They had a ball sliding and barreling around. I gave Honey the last of my turkey sandwich and was surprised to see her carry it back to the pups who devoured it quickly.

Two months and I remain surrounded by the most adorable critters.

Still, it’s time for them to find homes.

The Freedom To Pursue Happiness

The governors of all 50 states, and the mayors of many large cities, have assumed unto themselves the powers to ...

Tis early days, but what have we learned from the virus crisis? One thing is that we don’t know what we don’t ...