Yes, There Is A Sweat Bee 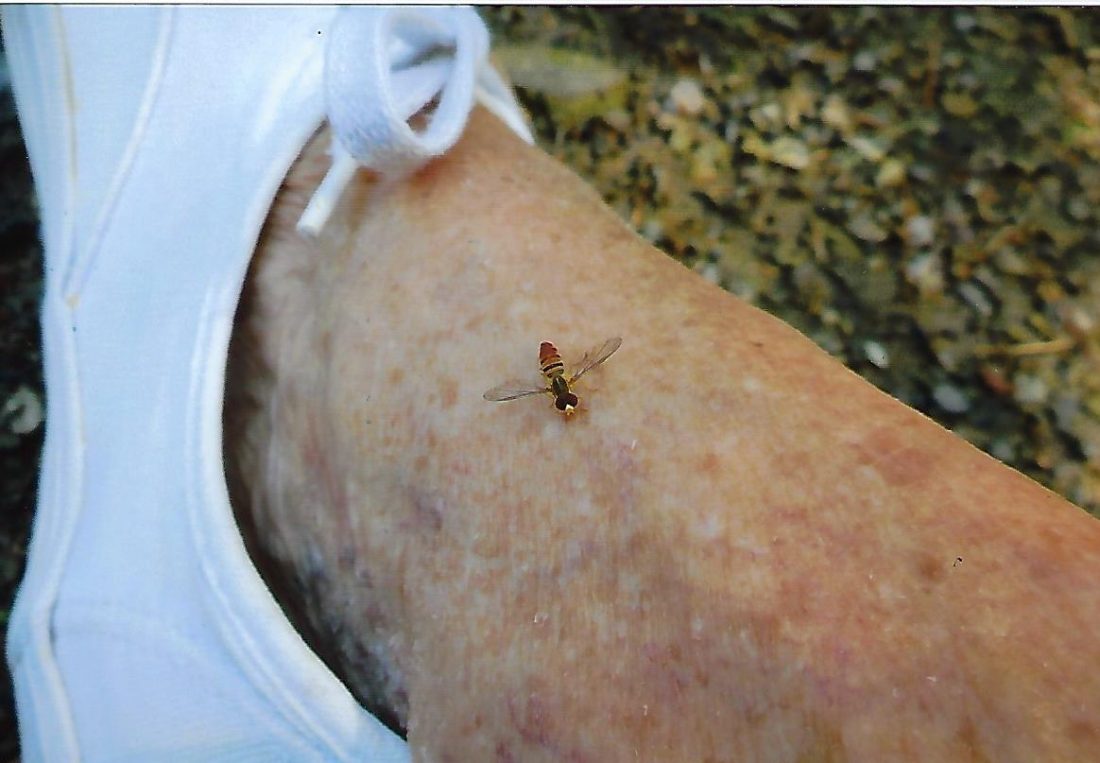 I lost my go-to guy.

RTPI’s Mark Baldwin up and moved with his wife to Sweden. I know it’s what they both wanted and they certainly seem happy with the new life — and world — they’ve discovered. I’m grateful I can continue to share their adventures on Facebook.

And I was able to “replace” Mark. Well, it’s taken at least three new experts to cover all I still do not know about bugs, plants, birds and everything else that makes me turn to an authority. I remain grateful for the Roger Tory Peterson Institute and all those fine professors at Fredonia. This column, however, was hatched before Mark left, written exactly three years ago now.

A picture enclosed (email can be wonderful), I typed after the heading :“Tiny Bee” that “I had a number of these friendly little guys around me. They can stick a stinger into my flesh but I feel nothing and have no reaction.” (I think that says something about me too.)

Mark’s reply got me on the right track though he needn’t have qualified his reply since he was right on: “It’s possible the insect in your photo is a sweat bee (family Halictidae). But it just doesn’t strike me as being a bee at all mainly because it does not appear to have 2 pairs of wings, which all bees and wasps have. Once again the challenge you present me of trying to identify something from a single photograph. You do this to me all the time, lol.”

Of course he was right on. He sent me to Google from which I quote most of the rest of my article. (What do I know about bees? even if they don’t sting.)

Sweat bees are a type of bee commonly found in America and have a painless and harmless bee sting. Sweat bees are flying insects and a major source of our honey consumption. (Those tiny guys?)

These bees can range anywhere from 0.125 to 0.5 inches in length. Male sweat bees are typically more slender than females and have a distinct yellow face, common among many species of bees. These bees are so named, because they are attracted to the human sweat or perspiration. [My mother would approve of the more genteel word there.] They have extended hairy hind legs, which often make people mistake them for bumblebees. These hairy legs carry pollen and nectar from flowers to the hive.

These bees are known for their metallic coloring. Most are shades of green, blue and bronze, although some are a dull, metallic black.

The males bite or pinch while the females sting when we attempt to remove them from our skin. [Why bother? Just blow them away if they’re annoying you.] Sweat bees can sometimes occur in large numbers, but they are not typically aggressive. They have short tongues which come in handy for lapping up human sweat which has earned them their name.

A sting usually only occurs if a bee is pressed against the skin and, according to the Schmidt Sting Pain Index [bet that’s something else you didn’t know existed], a sweat bee has the least painful sting of all stinging insects.

Unlike other types of bees, the sweat bees being typical “halictids,” make their hive underground or inside a tree trunk or hollow wood. They make solitary nests which will hold only one female bee at a time. However, sometimes the hive may contain a group of female queen bees who nest together in separate cells within a single nest. These nests do not hold more than a few bees at a time. They nest in proximity to one another. Therefore one usually finds a bunch of nests built together underground or in shrubbery roots. Their nests have many entrances and exit routes which are always guarded by a few bees.

These bees are equal-opportunity pollinators. They will pollinate virtually any type of available flower, playing an important role in pollinating the native plants of the areas they inhabit.

They will also pollinate various crops including stone fruits, alfalfa and sunflowers. According to the United States Agricultural Department sweat bees have more complex digestive and detoxification systems than other bees in order to handle and process the different types of pollen they collect.

All bees, including the sweat bees, are extremely crucial for maintaining the balance of the Eco-system as they play an integral role in pollination and keeping the vegetation alive. Many prefer to keep them alive and even let them breed to help the growth of their garden vegetation.

OK. I know there are some of you who aren’t wild about insects but try to leave these little guys alone. They really aren’t going to hurt you.

You can tell them Susan says so.

Is it important to have racial or sexual diversity in our fight against the COVID-19 pandemic? Heather Mac Donald ...

In 2012, Annie Glenn and I were doing what we so often did, which was to sit side-by-side in a quiet place ...

It is a common, if not especially honorable, practice in American politics for a candidate and her campaign to ...

Joe Biden still has time to do the smart thing and name New York Gov. Andrew Cuomo his running mate. The top two ...