Snap, Crackle And Oh My 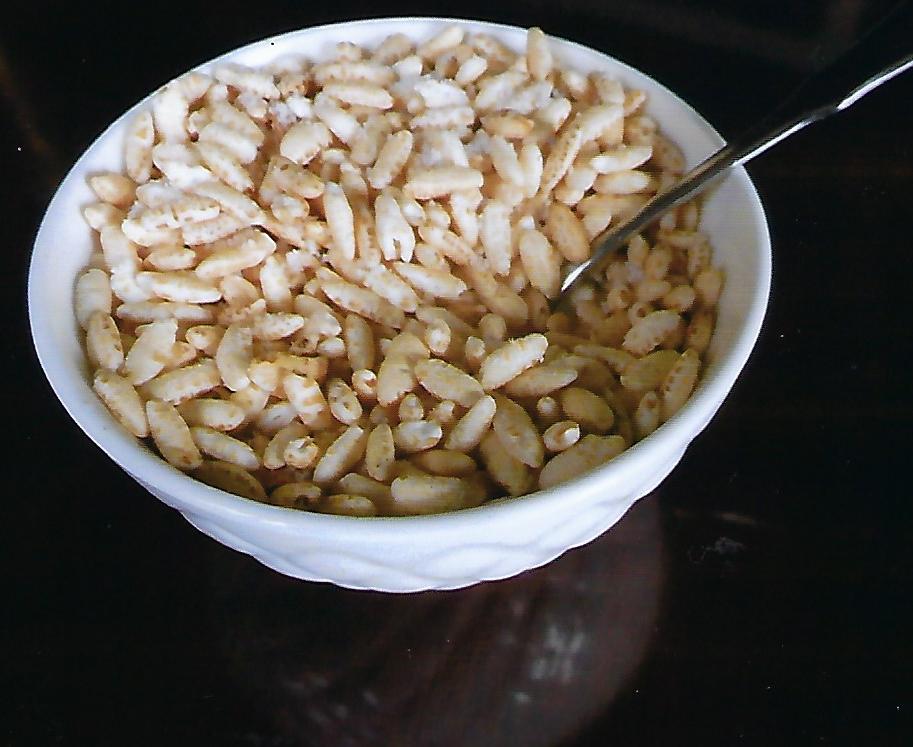 I really thought he was pulling my leg.

For all his endearing qualities (and I’ll happily attest there are many), I couldn’t count an outrageous sense of humor as being among them.

But he told me he worked for Quaker Oats shooting rice out of a gun to make the puffed rice cereal we grew up on. Come now — shooting food out of a gun?

Turns out he wasn’t pulling my leg at all.

Dr. Alan Riedesel retired from UB after a distinguished career as an education professor. To get there Alan spent three summers during college working at the Quaker Oats factory in Cedar Rapids, Iowa. Quaker was hiring students and Alan was happy to sign on, earning ninety cents an hour. Commuting from Momona, Iowa, with a carload of fellow Cornell College students, he felt settled enough by his third year to rent a room in Cedar Rapids. The plant worked around the clock, three shifts of eight hours each. Alan was hired to begin at eight a.m.

Rice was inserted into the side of a metal container, he told me, which was kept turning to prevent the rice from burning. He recalls the cylinder turning for two minutes and ten seconds before compressed air was inserted followed by a loud BOOM. Rice, now puffed, shot out. If one was a conscientious worker, each BOOM produced forty-one to forty-three boxes of the breakfast cereal. Alan always aimed for the highest and took pride in his achievements.

I then asked, what impressed him the most? The people were nice to work with though he felt they lacked pride in their work. He and his friends weren’t looked down on for being younger. But, he added, it got to be very hot. Iowa in summertime is hot to begin with and where he worked was not air-conditioned, not way back then.

Was wheat treated the same way? Indeed, but in a different section of the same building. Alan remained a rice man.

I wanted to learn more and initially found an advertisement from the 1950s. It opens on a figure dressed in a white lab coat, “portraying Professor Alexander Anderson lighting a toy cannon with a candle. The narrator warns us, ‘associates fear the kindly professor has lost his mind.’ Fear not though, for ‘out of the professor’s cannon came a glorious discovery: Quaker Puffed Rice and Puffed Wheat, the cereals shot from guns.’ Tchaikovsky’s ‘1812 Overture’ plays as blizzards of puffed cereal fly out of cannons and children enjoy big spoonfuls of these ‘nourishing little puffs of pleasure.'”

Was there really a Professor Alexander Anderson? Yes. A biologist who, in December of 1901, wanted to prove that the central nuclei of granules of cornstarch held an infinitesimal amount of water. But how to proceed? Many months of experimentation failed to produce the results he hoped for. Might explosion do the trick?

Powdered cornstarch was placed in glass tubes which were then sealed and put in airtight containers in an oven. Heating all to above 400 degrees Fahrenheit, he removed a still-hot container and whacked it with a hammer. Pow! The granules of cornstarch were changed into a porous, white fluffy material.

Anderson went on to experiment with rice and wheat as well as other seeds and starches.

My Musing of June 19, 2015, followed Dr. John Harvey Kellogg as he devised cold cereals to give the patients in his sanitarium. Starting with a not particularly appetizing form of granola, the Kelloggs invented corn flakes in 1895.

No dummy to the expanding market for cold cereal, Anderson patented his process in 1902 and signed with Quaker Oats to begin large-scale production of both rice and wheat the following year. Setting up a demonstration at the 1914 World’s Fair, Anderson and his associates puffed more than 20,000 pounds of rice, selling a quarter of a million boxes of cereal.

By the time he died in 1943, “Prof. Anderson’s Gift” had earned him twenty-five U.S. patents including one for a continuous puffing gun.

Needing photos of these special cereals, I quickly discovered Quaker no longer makes them. I ordered some online and shared with Alan once they arrived. He agreed: the new cereals are much smaller, perhaps a third the size of Quaker’s, and very tough.

Sadly, it appears Dr. Anderson’s invention has gone the way of the esteemed doctor himself.

Susan Crossett has lived outside Cassadaga for more than 20 years. A lifetime of writing led to these columns as well as two novels. “Her Reason for Being” was published in 2008 with “Love in Three Acts” following in 2014. Both novels are now available at Lakewood’s Off the Beaten Path bookstore. Information on all the Musings, her books and the author may be found at Susancrossett.com.