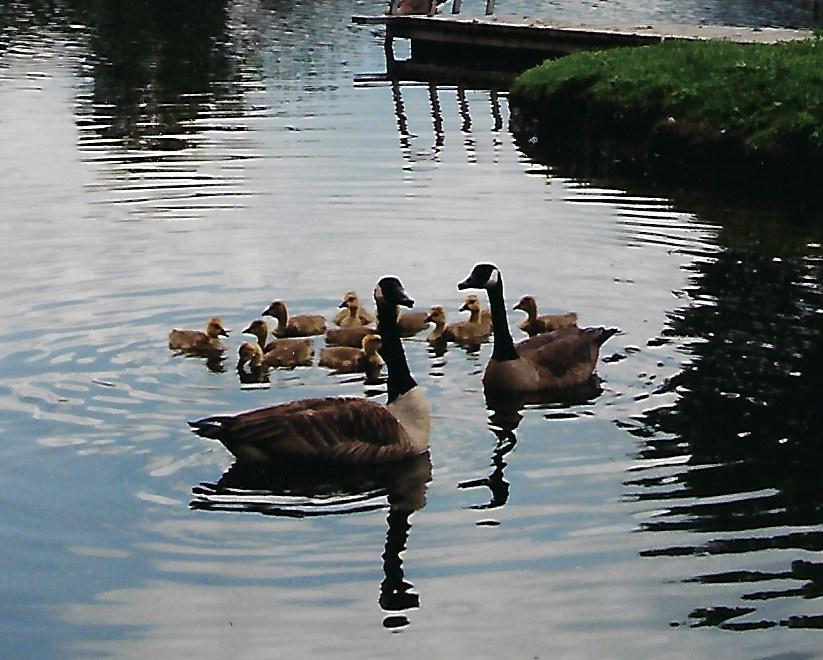 As is my wont, when I am home in May, I keep a close eye on the goslings, before and after hatching. I enjoy their newness when they are first brought over to feed on cracked corn and laugh at their silly (to me) early awkwardnesses. I also admire the skills they seem to have at hatching: staying close to the family of course and diving to escape plunderers. And what can elicit a laugh faster than watching their swaying run, as tiny arms (more than wings at this age) flapping crazily at their sides?

Part of my observation revolves around keeping a careful count. I am naturally interested as the numbers are sadly decimated in their first days by the snapping turtles and perhaps a sharp-eyed bird. Counting is also practical as it is generally one way to identify the different families since seldom do they have the same number of young ones.

Last May, for instance, the “first family” (those who nest close by and come first for food) produced eight goslings. Two days later the number had dwindled to six and, two days after that, it was down to five where it has remained. Nothing out of the ordinary or unexpected in any of that.

When “my” goslings were four days old, a second family appeared, also not an unnatural occurrence. I verified that they had four babes when arriving to eat. This, in my experience, is quite an acceptable number though what has happened since is hardly “normal.”

Remembering that I am starting with families of eight (now five) and, the new ones, four.

The next day was the one when the first family lost another, leaving me with two look-alike groups with four kids each.

Three more days pass. I verify the four and four at their morning feeding. But at night the count has risen to five and six Impossible of course for all geese in a clutch hatch at the same time. After that the parents desert the nest. I had been certain, even checking my notes, and yet . . . could, the thought kept nagging me, I have been so careless? But it remains now at eleven and I hope it will stay.

I have no way of being certain but base my surmise on what I have experienced in earlier years. Usually I see more than two families with goslings. Certainly more pairs were here before the hatchings began. And I do know from earlier experiences that one family can “adopt” those of other geese. I’ve seen it happen but they were always much older. One set of parents will take the responsibility for two or three original families. It helps with the later flight training.

So, having to guess, because of this season’s late cold and exceptionally high water (not to mention the plowing of the cornfield nearby), I suppose two other families hatched minimal numbers and, ending up with just one or two apiece, turned them over to family care. It frees the pair with just one and I don’t imagine the geese will know if they have five or six, or seven, to raise.

This is probably one time when the more is merrier for all.

Shopping With Your Husband Is A Mixed Bag

The best way I can describe my husband is that he’s like an old hippie. Not that he is really old and he was ...

Trying To Avoid The Bulk Balk

I, like most people, I imagine, have a love-hate relationship with the big bulk stores — you know, Costco, ...

This week, I’d like to highlight an important and exciting organization that does so much for the area: Love INC. ...

Sally Arrives With An Interesting Surprise

The third installment was met with a surprise. Sally arrived with Roosevelt. They sat adjoining one another. ...

Beware of clickbait character assassins masquerading as “journalists.” This is a lesson America should have ...

“Marriage lasting for a single breeding season seems best suited to the life of most birds and is the most ...