Looking Back To Childhood On Chautauqua Lake 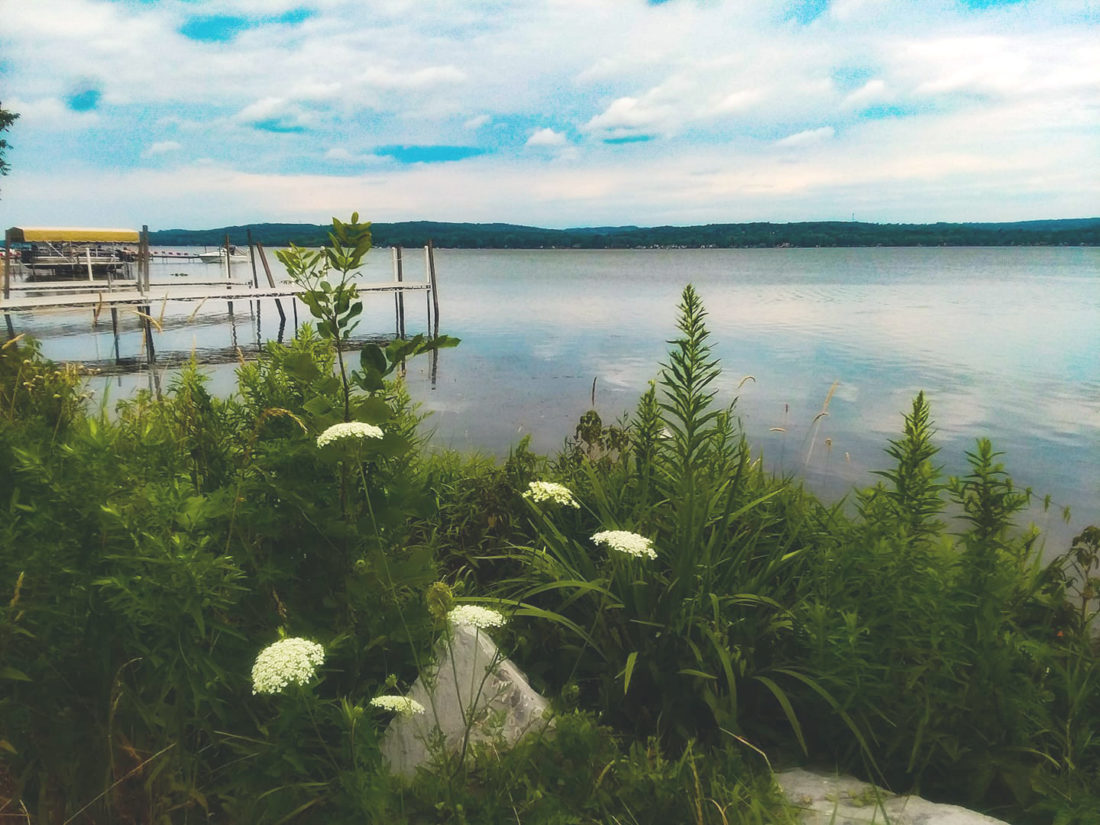 From Lakewood, looking back into childhood. Photos by Sandy Robison

From Lakewood, looking back into childhood. Photos by Sandy Robison

Carl Forsberg in his first fishing boat with his dog Chubby. Photo from family archives

To live by a lake is to experience a special kind of magic. Today, I sat with my sister at lake’s edge between Celoron and Lakewood New York on the shores of a little glacial lake called Chautauqua that lies in the westernmost county of New York. But really it lies in a unique and let me call it existential corner of the United States, because it is a slice of New York state right here on the edge of Canada that rubs its back on Lake Erie, that dangles its feet in rural Pennsylvania, and that has as much connection with the great North as it does with its state neighbor to the south, more so perhaps.

To grow up on the shore of this strange lake once called “bag tied in the middle” named by Seneca Indians in an era not that far back but far enough where life here seems primeval past to us today though it was but 200 years. The lake is 20 miles long and relatively shallow especially in the south basin, about 10 feet deep. The north basin is deeper and darker; the books say that part of the lake is 78 feet at its deepest part. ?The lake itself is comprised of two basins, the south one nearest the Chadakoin River where I grew up on the shores of Fluvanna (on the north side where one can view the sun go down) and the north basin where if one stands in Mayville one can view the sun rise best. It’s a strange shaped lake because where the two basins meet is about .61 of a mile across whereas the rest of the lake is 1 to 2 miles across. The north end begins at the great moraine at Westfield not ten miles from the shore of Lake Erie. The south ends in what we ungraciously call the Outlet and a river called the Chadakoin which is probably the Chautauqua River, the same word, obliviated somehow through the years through various tongues, English, French, Seneca, ancient Iroquois–and a jumble of all.

The land here has an interesting history of Native American settlements and French explorers, and if I’m honest, something of a haunted feel. In the winter it’s white far as the eye can see for weeks on end, sometimes for months. The lake itself freezes from Celoron to Mayville. When my father was a young (he tells us) you could drive a car on it if the ice was but four inches thick. And some did. When the lake was fresh and clean there was an ice plant near Celoron where huge rectangles of ice were cut and then transported to town and big cities too–Pittsburgh, Rochester, Buffalo, Cleveland. Imagine huge chunks of Chautauqua Lake water caught in ice, chilling the beverages of all those people. I have seen photos of draft horses pulling sleds on that ice, patiently waiting for the heavy loads of ice, their nostrils blowing smoke.

As my sister and I sat at a picnic table across from the dog park, we could see back into our childhood as Fluvanna is directly across the lake. Fluvanna Bay is a lovely shoreline curve where Grandpa Forsberg’s dock once was, a dock our grandfather put in and took out every season with the help of his son in law George Sherwin who lived next door. I can virtually hear the put put of his red wooden fishing boat and its 18 horsepower Evinrude chugging away from that dock and see my grandfather with his hat on–my kind grandfather Forsberg, this red haired Swede who had come here from Karlskoga, Varmland, in 1926, a man of thirty looking for a dream. And he found one there on the hillside where he built his own house on the steep hill next to the mansion (Tyler’s Mansion we called it in childhood; the Bonsi-fay family owns it now as well as his house, too), and lived there in that house overlooking the lake until he died at age 84 in 1977. How he must have loved the lake every day of his life. So any time I am next to this lake, I am engulfed in memories of childhood spent on its shore, and lucky for me, those memories are all sweet and beautiful, every one.

But I said it was a haunted place, and it is. As we stared across the lake we were reminded of many friends from childhood who had died in the lake or near it, and it was more than half a dozen, and just last week another life was lost there in the same waters. I thought back to a young man from high school who fell through the ice while ice fishing at noon with his father. He was a nice kid in school–always joking–around 30 when he died. He often fell asleep in history class. He had a smile for everyone. I thought too of the German Shepherd dog Sebastian who belonged to a friend. That dog slipped under the ice too one dreadful winter day. 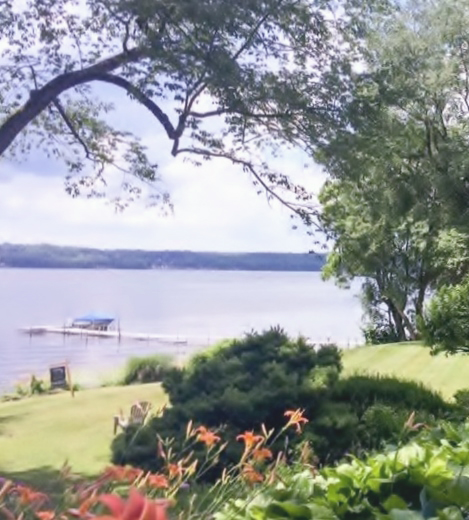 Lakes are beautiful things, but they are mysterious too and dangerous. When you grow up on the shore of a glacial lake in upstate New York fifty miles from Canada, you learn to look out for muck and not swim in certain waters. You learn to check and recheck your boat, to wear your life vest even though you can swim. You learn to button down the boat cover and care for your things for hard weathers come and go. You learn to watch the clouds and the color and temper of the waves.

When I was a young mother of 21, my toddler slipped into the water by the dock on Nesmith Street in Bemus Point. Had I not been a certified lifeguard, I’m sure he would have drowned that day. One second he was there and the next he was gone under. I dove into the waters, my arms heavy as in a nightmare, staring through dark water the color of cold steel, and I slugged my way through the thick water until I saw him three feet under, four feet under, floundering his arms and legs but still holding his breath I could see from his puffed out cheeks. His eyes met mine and held them. I reached for him in the lifeguard way, one arm across his chest and locked under an arm but we made no progress. It was like he was made of lead. In an instant, I changed angles. I had to swim under him and push him up by the legs and when I did, I found no bottom for my feet, and I was just off the dock’s edge. I pushed his legs, which he wisely kept hard like sticks, until his head breached the surface and what felt like pressure from below let up, let go, and we were safe, he was safe and free.

I pulled him onto the safe land. And now he is 48 and coming to visit me, and I guess that’s why it’s on my mind today. In its weird peculiar grip, the water seemed to try to hold on to him that day. I realize this is an odd story. But I tell it here to let in the light. I tell all dark stories to let them go into the light.

I was writing about haunted. Our memories can be haunted. Our inner landscapes can be haunted. Sometimes this lake feels haunted to me. Sometimes this whole county feels haunted to me with its glacial landscapes and long rolling empty land, hill beyond hill, mile after mile. We who live here love this lake. We love this lake but we are wary of it. We don’t take it lightly, not those of us who know it well. Maybe all lakes are dangerous, I don’t know. This one is. It’s also beautiful, poetically beautiful. Poet Yevgeny Yevtuschenko said Chautauqua looked like a Siberian lake to him, wild and imposing, startlingly blue.

And so as we sat there today, we thought we love this lake. We love it. But we respect it and we recognize its strange beauty, its haunted quality, its curious dangers. Maybe we people who were born here and grew up here are of the same existential mindset because we grew up in a place with life challenging weather in winter, with harsh winters and glorious summers in contrast, and with its haunted history. 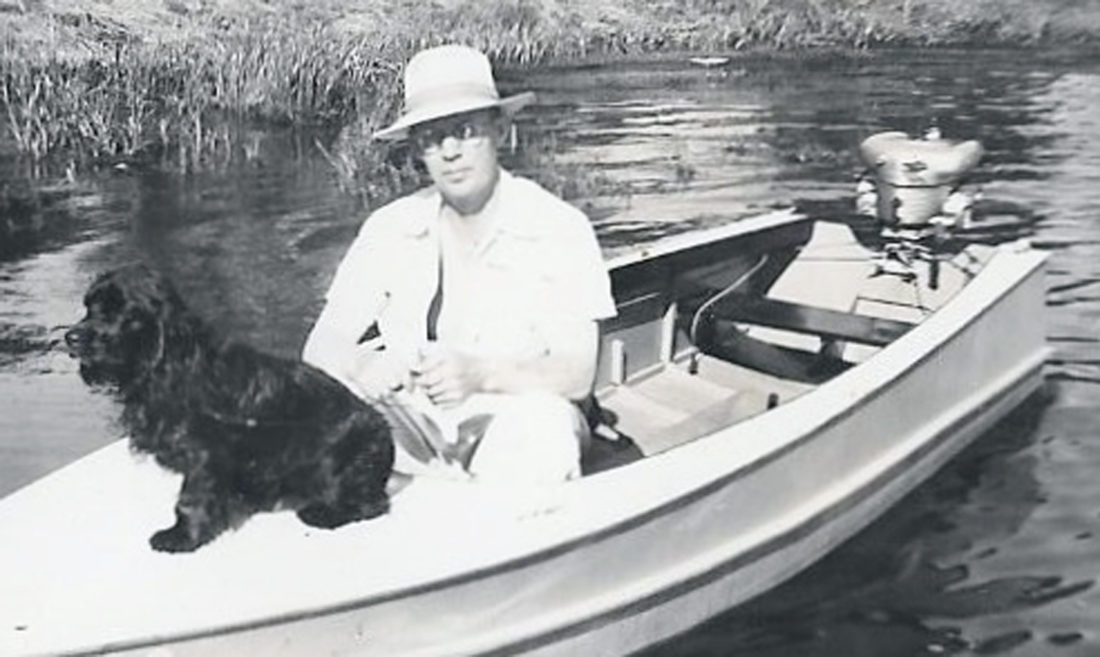 Carl Forsberg in his first fishing boat with his dog Chubby. Photo from family archives

I posted one photo I took on my Facebook page. I captioned it: Ah Chau Lake, how I love ye. And I posted another and wrote, From Celoron looking back into childhood. And so it is this lake reflects us back.

So, who do you trust? Do you trust the people involved in Jeffrey Epstein’s death? They tell you he committed ...

Remember trying to satisfy those sweet tooth cravings as we were growing up? Those of us from my generation were ...

The Laws Of Economics Won’t Ignore You

A paradox is a statement that is seemingly self-contradictory or defies expectations. It often describes some ...

It’s a new decade and I think it’s going to be a decade that will be all about empowering the individual. And I ...

Teachers Have So Much Influence

It is always a thrill for teachers when former students do well. I keep track of many of them because their parents ...

The Latest Protests In Iran

The latest protests in Iran by people angry over the Iranian military’s missile launch that “unintentionally” ...