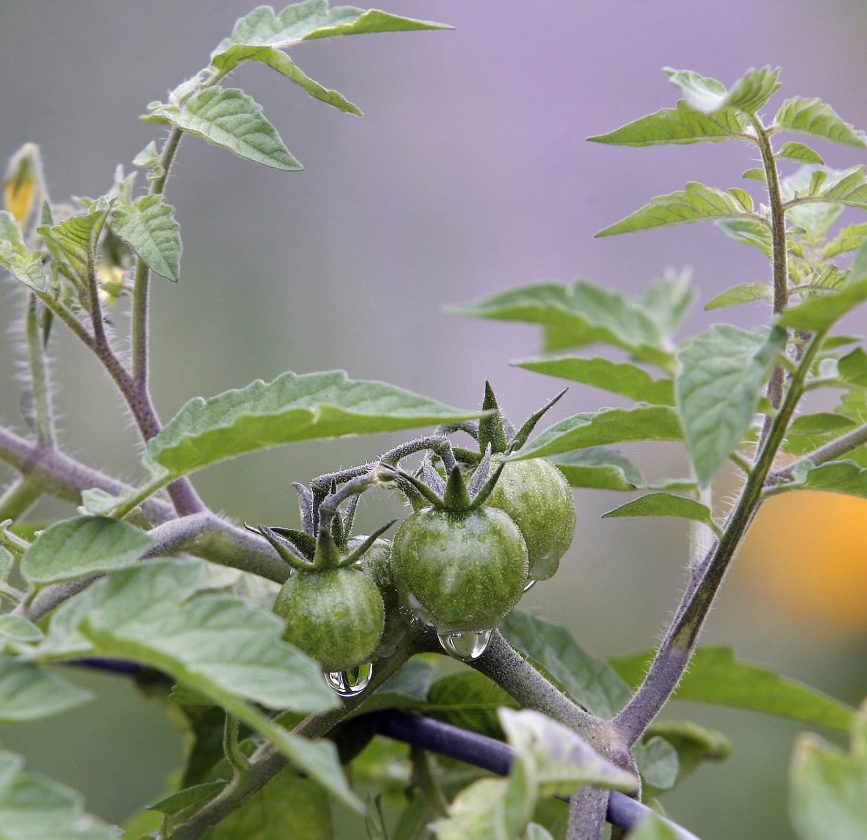 Pictured are fresh tomatoes growing in a New Hampshire community garden. Tomatoes are one of the plants Rolan Jones longed to be able to garden and not have to bend over far to tend them. On May 12, he got his wish. AP photo

GREENSBORO, N.C. (AP) — Roland Jones longed for a summer vegetable garden, where he could plant tomatoes and beans and not have to bend over far to tend them.

In the courtyard at Abbotswood at Irving Park, administrators at the senior living community installed two raised wooden planters and two pots.

They even installed a sign, naming the space “Mr. Jones’s Veggie Patch.”

Tomato plants and Jones’s heirloom butter beans have begun to grow in the planters; Jones will plant string beans in the pots.

“You all are too much,” he told administrators. “I’m overwhelmed.”

Executive Director Allison Pait created the program to give residents some sense of normalcy during the coronavirus pandemic.

No active cases of COVID-19 have been reported at Abbotswood, Pait said.

But residents’ group outings and activities have been canceled to protect them.

They dine in their own apartments, not in the dining room with other residents. But they can walk the hallways, provided they wear masks and maintain social distance.

Pait had noticed how residents were affected by the isolation of not being able to see family and friends in person, only virtually.

“Our residents who were usually positive and upbeat were less so day by day,” Pait said.

She sent a request form to each resident, asking what they want or miss most. She encouraged them to get creative.

Pait, along with Resident Relations Director Markeith Thomas and the staff, set out to turn wishes to reality.

“I thought that granting these wishes could be an upbeat and personal way to show residents that we care, make them smile and give them something to look forward to during these uncertain times,” Pait said.

So far, they have made nearly a dozen wishes come true.

“Sometimes we have to be a little creative, and sometimes we’re able to deliver on what it is they are looking for,” Pait said.

Along with the granted wish, residents receive a handwritten card and poem.

“They see us going to extra mile to try to make a tough situation a little better,” Pait said. “It certainly has brightened their days.”

Pait’s family owns a strawberry farm in Lumberton. They brought in fresh strawberries from the Jack Pait Strawberry Farm.

So Pait arranged for friend Nancy Pitkin, a pianist and vocalist, to perform a concert in the courtyard. Residents opened their doors and windows to listen.

Pait herself has given haircuts to several men.

Jim English missed exercising in the Abbotswood fitness center, now closed. So staff moved a recumbent bike outside. It’s sanitized after each use, Pait said.

Elizabeth Heafner had bought one geranium to plant outside her screened porch. Staff planted several more.

“I sit on my porch and watch the bumblebees enjoy the flowers, too,” Heafner said.

“They are doing a great job during this awkward period we seem to be in,” she said.

Evelyn Dooley said that she and her husband, William, asked for the opportunity to watch a movie in a theater with other residents.

“I was looking for company, but of course they couldn’t provide that,” Evelyn Dooley said.

But Abbotswood could provide a meal and a movie for the Dooleys.

So staff set a table in a vacant apartment with a white tablecloth, china and silverware. They served the couple a lunch of soup, salad, Maryland crabcakes, shrimp tacos and dessert, ordered from Village Tavern.

The living room television became a movie screen, surrounded by a curtain. The Dooley watched the film of their choice, the 1954 war drama “The Caine Mutiny.” They even had popcorn.

“I was very surprised,” Evelyn Dooley said. “It was very charming and very thoughtful.”

Betty and Lee Gorrell wanted to dine in the dining room.

Staff served them a private meal by candlelight, with food ordered from the Village Tavern.

For their efforts, administrators have received lots of thank-you notes.

Pait and her husband, Gregg, made the wooden planters and gave them to Jones.

“Y’all are too good to me,” Jones said after making his way out with his walker to see the results.

He thanked staff for the vegetables — and more.

“You don’t know how much we appreciate you all keeping us safe,” he said.

Jones irrigated the growing plants with water from a plastic jug.

He looks forward to planting green beans. Blue Lake beans are his favorite.

“My wife would eat string beans every day, I believe,” Jones said of his mate, Phyllis.

It will take some time for us all to get used to the “new normal” after the COVID-19 epidemic. One aspect of ...