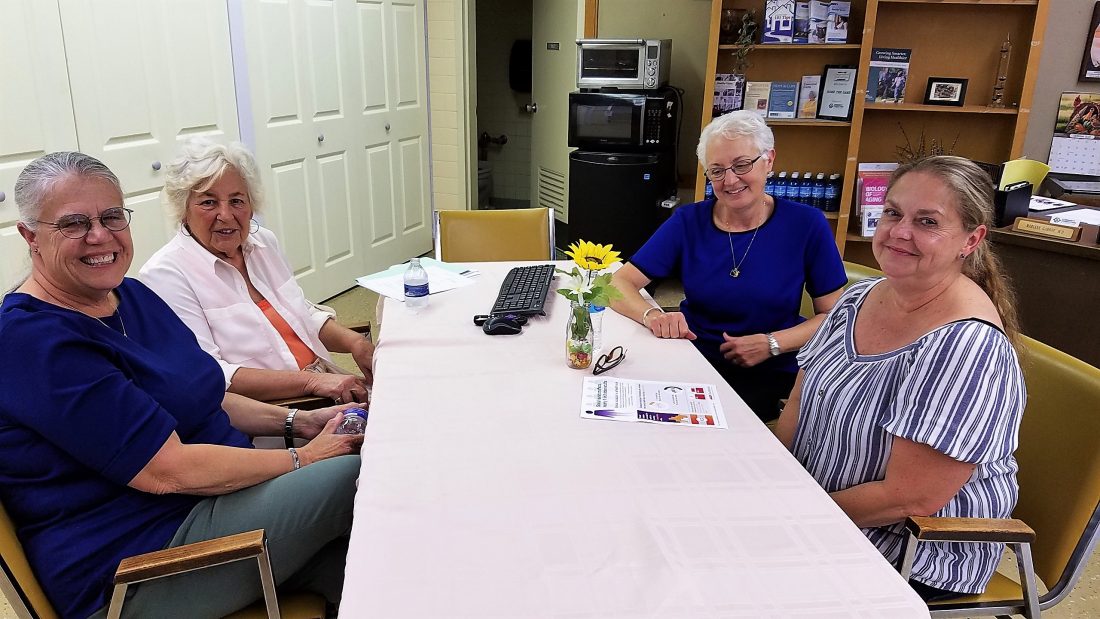 FINDLEY LAKE — The five years since Community Connections at Findley Lake was formed has taken it down many different roads, but the purpose has remained the same — to serve whatever needs are present in the area.

In 2014, Dr. Lin Baylis, Judy Hunt, Dr. Marlene Garone and Christine Ball recognized the growing needs of the aging population in and around Findley Lake. They set out to respond to those needs by creating an organization which would provide such services as transportation, medical assistance, shopping, and prescription pick-up.

“I think we started out very small with just a few services. We said, ‘Well let’s see what happens in the community,'” said Garone, who serves as NORC director. “Very slowly, more and more people were asking for our services.”

Hunt, chairperson for the board of trustees, agreed. “We were getting a feel for it and were very optimistic, but we didn’t expect it to blossom like it did,” she said.

The women allowed Community Connections to grow “at a grassroots level,” Baylis, the organization’s executive director, said. Instead of setting goals and trying to attain them, they allowed the needs to present themselves and took steps to meet them.

“Every time Christie would pick up the phone, it took us down a different road,” Baylis said. “We never added additional staff until we got to the point where we needed it.”

The first staff member who joined Community Connections was the Community Health Advisor, Becky Swetz. “It was very clear there was a need for her,” Baylis said.

The Board of Trustees also grew slowly as a volunteer working board. It is currently at six members, including the founding women, local businesswoman Terry Gross, and Christine Cheronis, who is also an employee in the Chautauqua County Office for the Aging.

“That’s another thing we did slowly,” said Hunt. “We were very particular and we did not make those moves until we were very comfortable with them.”

Ball’s work as a administrative director grew as the organization expanded. She now works 40 hours a week. “So, there is someone physically available here five days a week now,” Baylis said.

Ball said she credits the growth of Community Connections to the direct involvement of the board of directors and to the community itself. “The board was always beside me, helping me in every way possible,” she said. “In the community, our volunteers are so eager to take part.”

Community Connections engages 24 volunteers and is always looking for more, Baylis said. Volunteers perform a variety of services, depending on their schedule and ability. All told, said Baylis, volunteers, including board members, put a total of 7,000 to 8,000 miles on their collective vehicles each year, and donate a total of 200 hours per month.

So, what lies ahead for Community Connections? “The NORC Grant will allow us to continue to do what we’ve been doing, as well as to expand,” said Baylis.

Garone added that the grant will help the organization respond to needs. “We have been able to expand the services we provide,” she said. “For instance, we were able to expand transportation services, which is huge in this area.”

The organization is also looking to give support to the area of care-giving, Garone said. “Through our partnership with the Office for the Aging, we will be able to offer care-giving support and respite care,” she said.

In other words, the organization will continue to travel down many roads, as it has always done, Baylis said. “We will let it grow organically. We are always thinking, always trying to stay one step ahead,” she noted.

Baylis said that even though services related to aging are the main focus at Community Connections, there are no restrictions according to age. “We have helped school age children and young parents, as well,” she said.

Hunt added that even though the organization is called Community Connections at Findley Lake, “we do not draw a line. We have helped people in Sherman, Ripley and all around the area.”

Question: What do I do for insurance now that I have retired from work and live in New York, but my employer was in ...

With the coronavirus pandemic, scammers are out in full force, taking advantage of every opportunity they can to ...

Some ‘Dairy’ Good News During The Pandemic

Do You Know NY Connects?

NY Connects is staffed by specially trained operators working to understand your needs,inform you, connect you, and ...

During a discussion with a friend about the recent pandemic of COVID-19, she states “I have never cooked at home ...