Late Fall Is The Light At The End Of The Tunnel 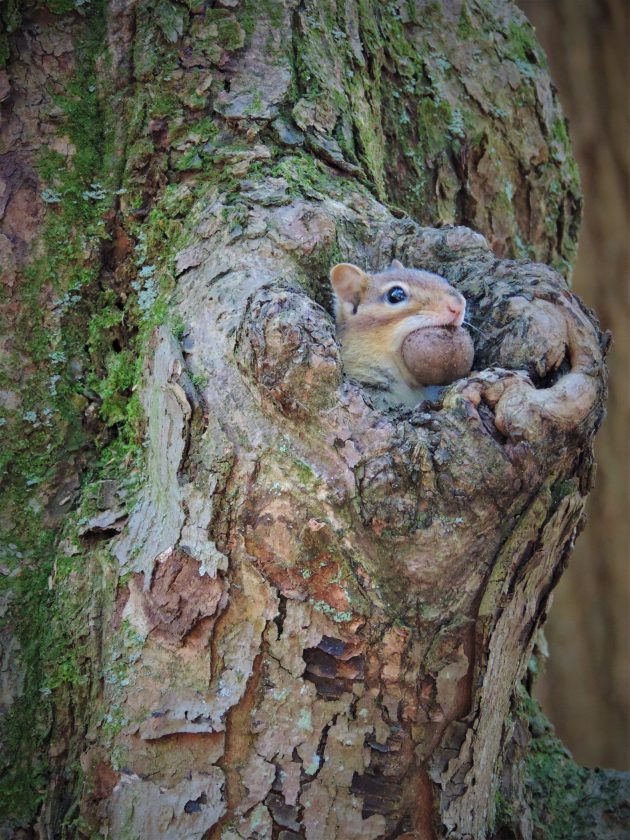 An Eastern Chipmunk prepares for winter. Photo by Katie Finch

I don’t really enjoy this time of year.

In a walk outside, it is a challenge to find joy, beauty, and warmth in late fall, especially compared other seasons. The blooms and songs of summer are over. The bright pinks, yellows, reds have fallen away. The last hurrah of fall is also coming to a close. A few hardy leaves cling to the skeletons of Sugar Maple, Yellow Poplar, and the oaks like streamers left over from a birthday. You know they will soon have to be cleaned up. A let down feeling sets in. The feeling one gets when the party is over and the everyday routine returns.

But this is the rhythm of our planet. The rhythm of living in the Northern Hemisphere where at times we are turned towards the sun and at other times turned away. Now we are in a time of turning away. After the fall equinox on Sept. 23, the days began to get shorter and the nights longer. The winter solstice, on Dec. 21, will mark the shortest day and the longest night of this year. But it is also a turning point back to the light. Every day after the winter solstice minutes are added to each day until late spring. In a way, the winter solstice is the light at the end of the tunnel. It doesn’t really seem it because we still have so much of winter to go.

Right now, at the beginning of November, we are still moving deeper into the dark tunnel. As the weather changes, we see the first flakes of snow and last of the green growth. My sun-loving self initially dislikes it. I think of the things I didn’t get done in the warmer weather. Any bit of sun on the gray days is an instant attraction and spark of joy. I’m forlorn when the sun sets shortly after coming home from work.

It is then that I pull out a children’s book — for there is such comfort in this art form, even for adults — by Leo and Diane Dillion. They didn’t write the words but created the illustrations to accompany the well-known text. The words are ancient, composed by an unknown author as early as the third of fourth century B.C.

“To everything there is a season and a time to every purpose under heaven.”

These words are originally from The Book of Ecclesiastes in the Old Testament. They have found their way into songs and other works of art. While old, these words embody wisdom that rings true in every age and culture. They describe the changing season of human life — birth and death, weeping and laughing, loving and hating. But also the natural cycle of the seasons, which our human lives are also so intimately tied to.

These words and this season are reminders that not all times are a party or celebration. Not all times are for unbounded growth. In order to continue to be healthy and grow for the long term, we all need to stop and rest.

The natural world knows. Trees live for tens to hundreds of years. Yet they take a break every year. They put their energy in to reaching up to the sun when it is there. Then, though thousands of years of learning, they pull into themselves, storing energy for when it is their time to grow again.

Woodchucks, Black Bears, Jumping Mice and some bats are doing the same thing right now. They are as prepared as they can be for a long winter hibernation. Frogs, turtles and salamanders are burying themselves in leaves and mud to slow down and conserve the vital body functions in order to survive. Most insects have paused in some stage of their life cycle.

The words and this season are also a reminder that, just as the growth doesn’t last forever, neither does the darkness. Spring comes again. Days get longer again. Creatures wake up. Leaves reach out and up to the returning sun. Such is the nature of a cycle.

Humans are not meant to go dormant like the plants and animals in this four-season climate. And our modern day culture, while wonderful for some things (heat, light, and long underwear come to mind in November) is not so great at connecting us to nature. Schedules are full and expectations are high to keep them that way. We are often defined by what we do, what we achieve.

When did we lose this primal connection to this natural cycle? But every year my least favorite season comes around as a reminder that a pause is not only acceptable but necessary. Though it is tempting at times, I don’t think I will be excused from work with an “I’m hibernating” doctor’s note. But there are moments to slow down. Times to say “No” or at least “Not now.” A season to mimic nature and turn inward in care for what is vital. For we are members of the natural world too and are still called to be in tune with these ancient rhythms. We just have to listen and give ourselves permission.

There is a time for work and a time for rest. There is a time for growth and a time for dormancy. It happens in nature, and in us. We do not need to justify our purpose and presence with endless productivity. Or perfection. After all, it is because of a seeming imperfection — a tilt in the Earth’s axis of 23.5 degrees — that we have these glorious blooming, growing, harvesting, and dying seasons at all.