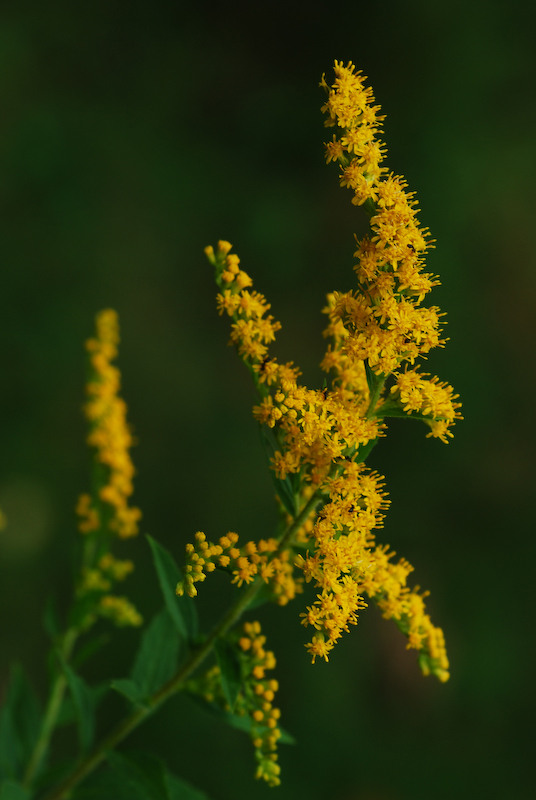 Fields throughout the Chautauqua Watershed are ablaze. One of nature’s spectacles, the fall blossoming of goldenrod is underway and will continue until the first hard frost.

Rest assured that if you have hay fever allergies, goldenrod is not the cause of your affliction. The culprit is ragweed, a plant with a well-known name but unknown face.

It’s understandable that goldenrod would be falsely accused with its fluffy yellow plumes held aloft and waving in the breeze. A close-up look at a goldenrod’s blossom cluster, however, gives a hint as to its mode of pollen dispersal: lots of insects. Goldenrod is usually crawling with insects, to which the pollen adheres. Pollen grains carried by insects tend to be heavy and sticky. Late summer breezes don’t carry goldenrod pollen – goldenrod relies on insects to do that work.

In contrast, the plants that send pollen up our noses are those that are pollinated by wind, and ragweed is a spectacular example. Ragweed flowers are unimpressive to the eye. A close-up look reveals rows of little green umbrella-like male flowers, the ones that bear pollen. And do they ever! A single plant may produce a billion pollen grains. The female flowers are on the same plant – they stick out, inconspicuously, at the places where leaves attach to the plant. Light, wind-blown pollen grains adhere to the female blossom’s sticky pistil, from which a pollen tube grows down to the ovary where fertilization occurs. Of course, for every pollen grain that results in fertilization and the formation of seeds, countless others miss their target and some of these wind up being inhaled as allergens, causing runny noses and itchy eyes.

Let’s get back to our innocent autumn beauties, the goldenrods. They are notoriously hard to identify, but it can be done, at least tolerably, with a good field guide like Peterson’s, which lists about 30 of the 60-70 species in our region. One of our most common species is Canada goldenrod, Solidago canadensis. It grows to five feet tall in clearings and along roadsides, is densely covered with sharply toothed leaves and bears graceful plumes of yellow flowers.

At this time of year, you can find a ball-shaped growth on the stem on some of the plants. This is a goldenrod ball gall. Last spring a tiny fly called a gall fly injected an egg into the tender, juicy stem of the growing plant. The egg hatched and all summer the larva fed on goldenrod tissue, secreting a substance that the plant reacted to by growing the bulge or gall you now see around the larva. By autumn, the larva chews a tunnel out to the inside edge of the gall, then crawls back to spend the winter. Gall fly larvae don’t always make it. Downy woodpeckers are just the right size to perch on goldenrod stems and smash through the gall to snatch the plump bit of fat and protein. If it survives winter, come spring the larva forms a pupa, which hatches into an adult, which crawls out to the end of the tunnel. Then, with the aid of a balloon-like projection on its forehead, it pops through the thin husk and flies off to mate.

This is but one example of the ecological role our abundant goldenrods play. Whether you enjoy them from afar or up close, do try to get out and enjoy the spectacle – yet another reason to protect and preserve the open spaces of the Chautauqua Watershed.