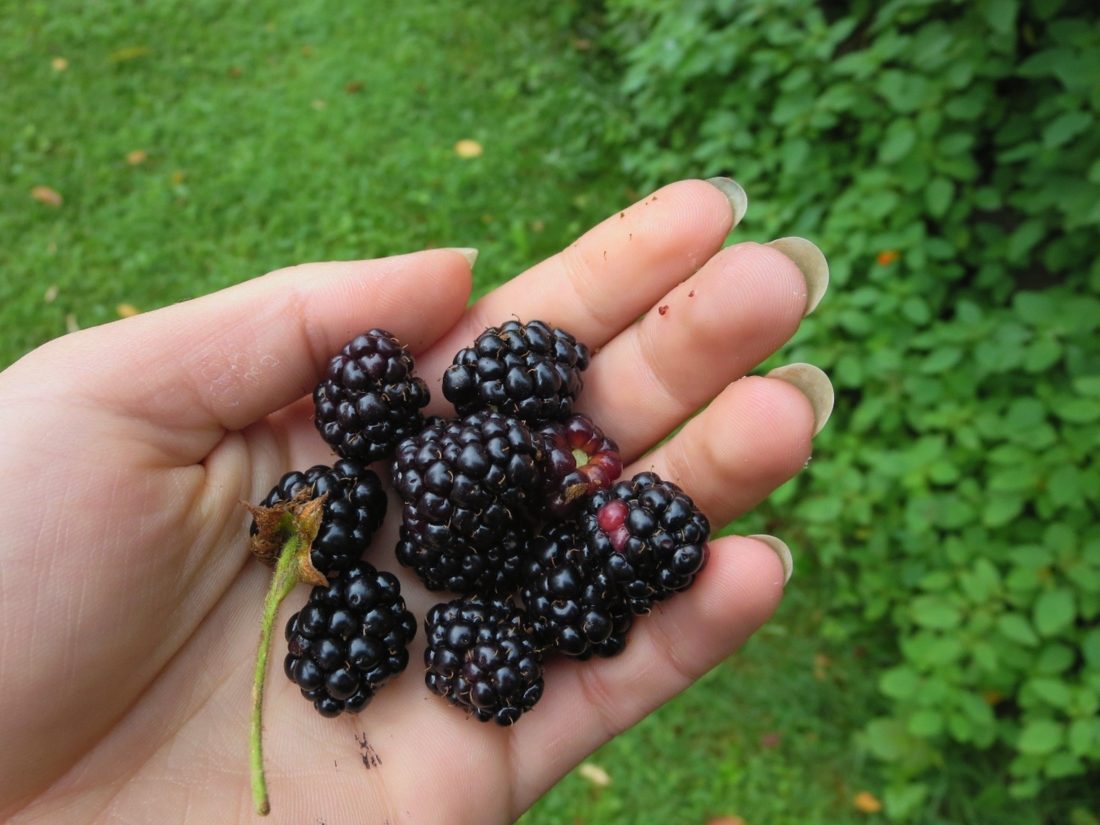 Editor’s Note: This is a reprint of a column that first appeared in The Post-Journal in 2015.

As a little girl, I can remember — perhaps less vividly then I would like — hot and humid August afternoons, impatiently swinging a white plastic bucket by its flimsy handle down a freshly-mowed wood’s trail. A golden retriever named Brandy would gallop by, tongue lolling, nose pointed low, chasing something I wouldn’t see. I didn’t mind. I wasn’t interested in fauna anyway. I was here for one purpose and one alone: blackberries. Plump, succulent, thumb-sized blackberries. By all accounts, I might as well have left my bucket at home. Of course, if my empty bucket made you doubt whether or not I’d found any of the wild fruits, you needed only to ask me to stick out my tongue. Dark purple. Every time.

Fresh blackberries were and still are something I just can’t turn down. I’ll admit there have even been years when I tried a few unripe berries in eager anticipation of the short blackberry season; it seems like the whole summer is gone before the sun kisses the berries ripe. The raspberries and black raspberries tide me over but it’s the blackberries I crave more than anything. Last week I discovered a small handful of dark blackberries (location undisclosed) and now I am constantly on the look-out, albeit without the customary white bucket. I’m sure that if I could somehow summon the will-power to fill a bucket-full of the berries, my mother would make one of her blackberry pies — complete with a smiley face cut into the top part of the crust. I can almost smell the aroma wafting through the house and see the dark purple filling bubbling out of the pie’s crusty grin. But somehow I don’t think a bucketful of blackberries would make it the few blocks to my parent’s house unscathed … one for me, one for the bucket, one for me, one for the … me.

Wild blackberries ripen in August and technically aren’t berries at all! Botanists consider them part of the rose family and categorize them among the aggregate fruits. If you were to inspect the tasty treats closely, you would realize that they are made up of many separate juicy spheres held together by a solid white core. In fact this core is also a way to tell the difference between the commonly-misidentified black raspberries and the true blackberries. A black raspberry will pull off of its stem completely and if you look at the fruit, there will be a hole in the center, a tiny little cup, just like a red raspberry. A blackberry has a fleshy core when you pick it and feels more solid. Of course there are other ways to tell — one of them is a little less pleasant. The thorns of blackberries are straight whereas the thorns of the black raspberry plant are hooked. Either type of thorn seems to almost reach out and scold you for thieving its charge; analyzing thorn curvature could be a down-right dangerous endeavor! I prefer taste-testing. I don’t think I could accurately describe the difference to you — but I know for certain that if I was blindfolded I would be able to tell the difference between a black raspberry and a blackberry. The blackberry has a deeper, darker taste, perhaps a bit ominous, whispering of crisper fall days to come. Of course, if you could take a peek at the petals of both berry bushes you’d be able to tell the difference that way as well. The petals of the blackberry flowers spread out noticeably more than the petals of the black raspberry flowers.

I will admit that the color of black raspberries is very close to that of blackberries — and that might be where the misperception comes from. The dark, almost royal color is due to anthocyanins. Anthocyanins are organic compounds that are actually very common in plants. If you enjoy the deep purples of pansies, or the kingly blues of blueberries, or the red hues of autumn leaves, then you already appreciate anthocyanins … just not by name. However, blackberries actually go through a pre-ripening spectrum. At first the fruits are green and very hard. There seems to be no juiciness to the berries when they are in this stage of ripening — you could break one in half without it yielding much liquid. The next stage is a whitish color followed by a tempting red shade. The red berries are still dense and do not have any of the sweet qualities of the ripe berries. Believe me, try to be patient! Finally, the berries slowly — it often seems like one by one — turn black and fill with the sweetest flavor of the season. Once the first ripe berry appears, you could return to the same bush every day and find a few more that apparently have ripened over night! On the plus side, the same anthocyanins that give the berries their color have antioxidant properties for us! On the negative side, the anthocyanins also act as a signal to wildlife that the berries are ripe — we certainly aren’t the only ones who enjoy these delicious treats. Everything from bears to beetles to birds to slugs seek out the far-flung patches to indulge in the sugary masterpieces. We are fast approaching to time to hunt for these treasures, greatly anticipated by all. 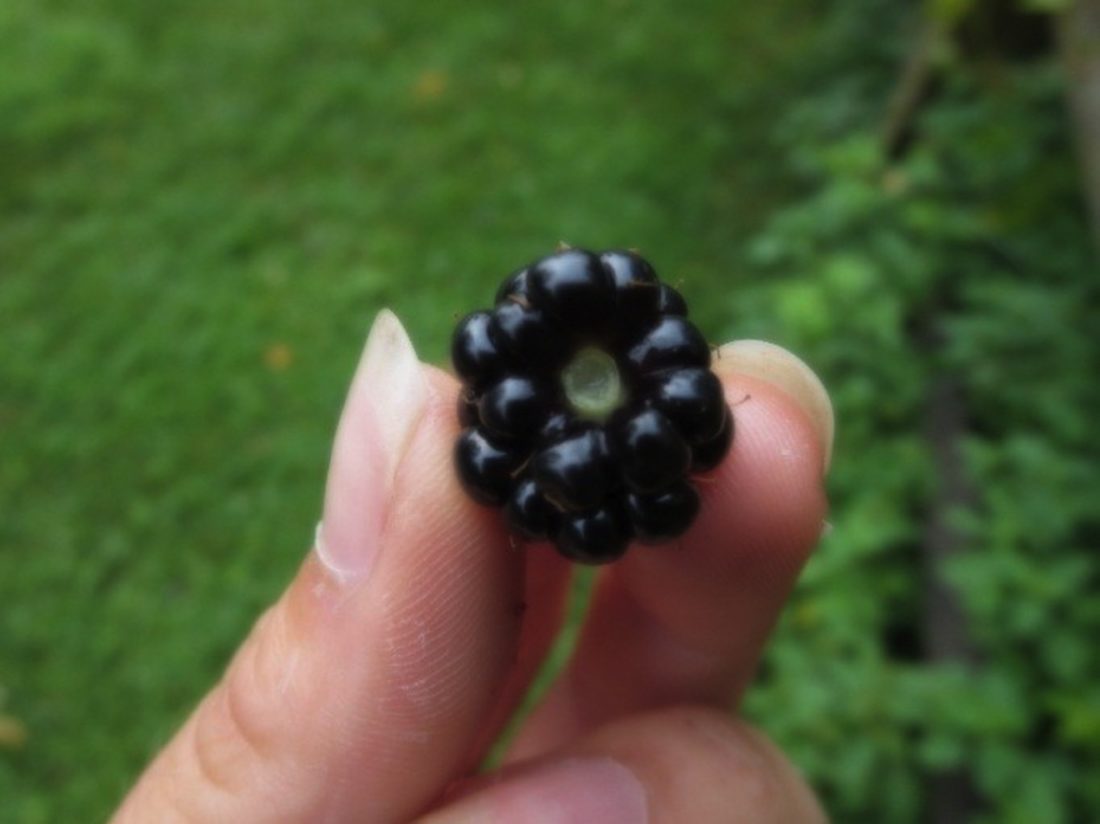 As much as I love blackberries, to me, their presence is bittersweet, akin to the first-sighting of goldenrod and the first chorus of crickets. Summer is nearing its end. The sun doesn’t perk up quite as quickly in the morning, the night falls just a little bit faster. If they didn’t taste so wonderful, I might even be a little cross with the petite harbingers. 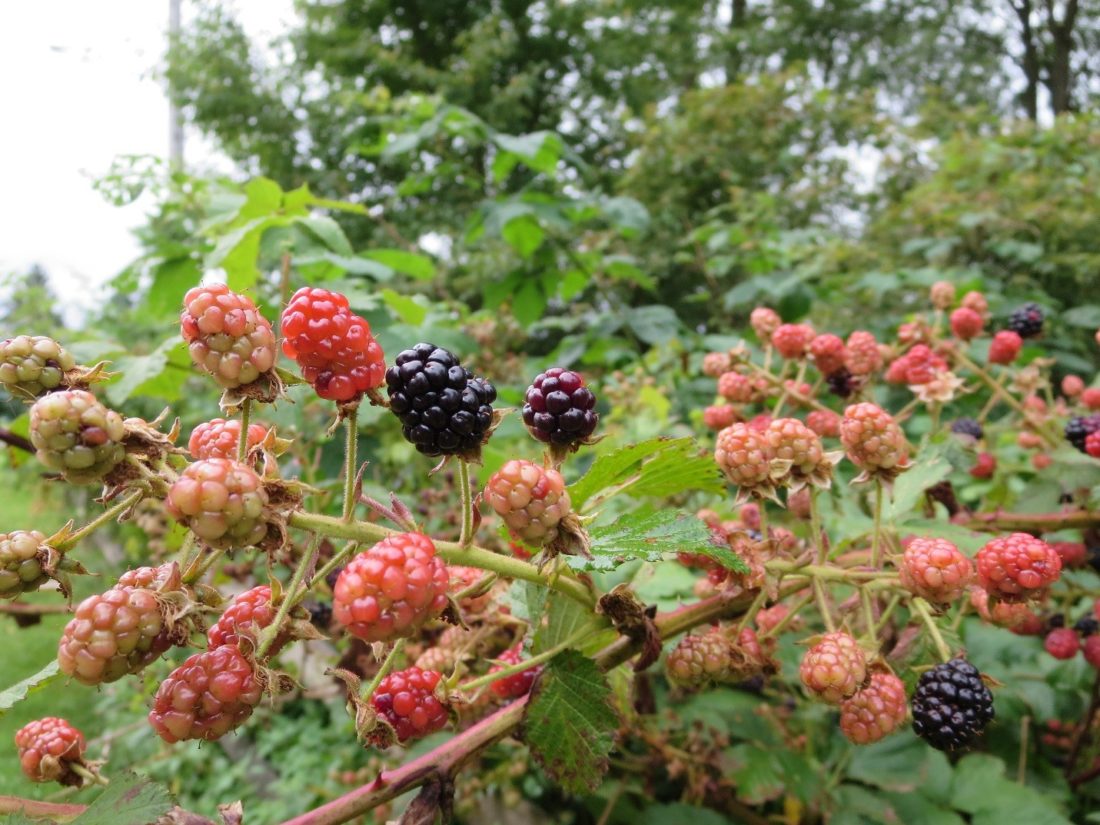 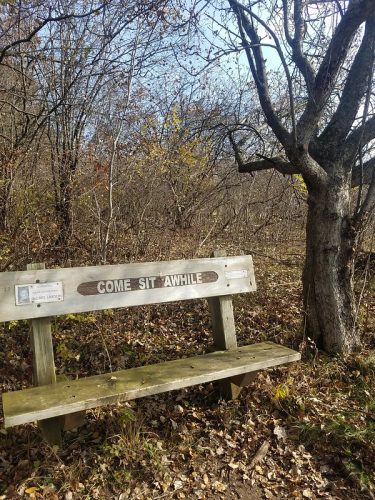