Jefferson Middle School fifth graders in Mindi Lydell’s class show some of the origami cranes they have created. The project began because student, Bella Snow, wanted to create origami cranes for her classmate, Jacob Johnson, who was recently in the hospital battling an illness. 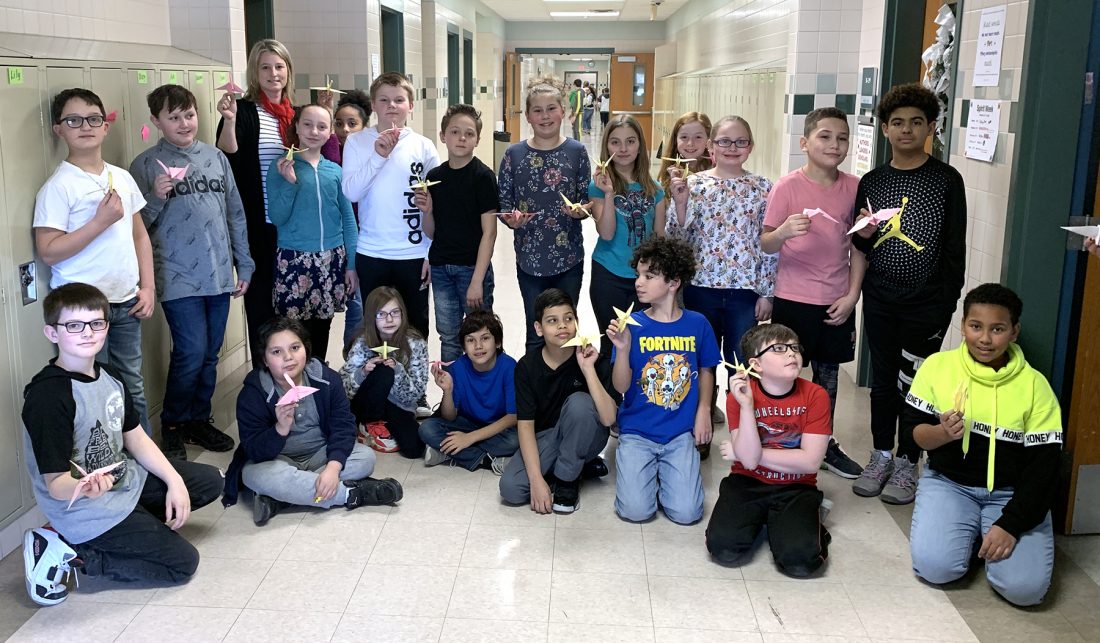 Jefferson Middle School fifth graders in Mindi Lydell’s class show some of the origami cranes they have created. The project began because student, Bella Snow, wanted to create origami cranes for her classmate, Jacob Johnson, who was recently in the hospital battling an illness.

“What are you guys doing in class?” asked Jefferson Middle School sixth grader Julian Hultin, from his hospital room at Oishei Children’s Hospital to his class via online technology.

“We are subtracting and adding integers,” said one student.

“Have you guys been having fun?” Hultin asked.

“Tell Julian what we are learning about in science now,” the classroom’s teacher, David Digirolamo, said. 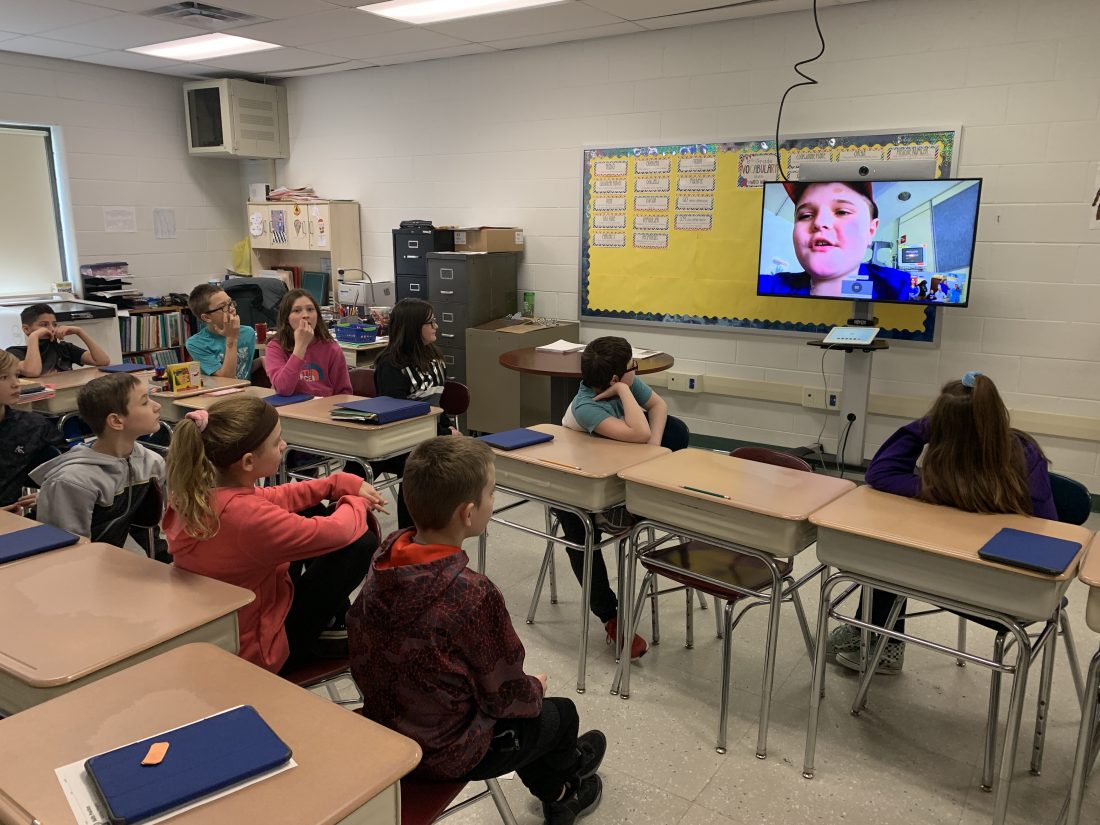 “We started learning about climate change yesterday,” a student said.

“And Julian when you are feeling up to it, we can get you on Nearpod or Amplify Science so you can participate if you want?” Digirolamo said.

“Of course I do!” Hultin said.

Hultin was talking to his class face-to-face through technology. He is currently in the hospital in Buffalo battling leukemia. Digirolamo thought it would be great to have his classmates connect with him at least twice a week.

“As a school, we think it is important to connect with Julian because he is part of our Jefferson family,” said Digirolamo. “It truly is a wonderful sight to see Julian’s face, and all of the students faces light up when they see each other. Nobody sees sickness, only love and friendship.”

An important part of a child’s education is learning empathy for others and giving back to their community — something that Jefferson Middle School is teaching every day. Recent events with two students, Hultin, and fifth grader Jacob Johnson who is battling Stevens Johnson Syndrome, have given the opportunity for the school to rally together to help bring some joy, light and needed resources to the boys.

Jacob is in Mindi Lydell’s fifth grade class and was admitted to Oishei Children’s hospital in January. The class was going to make get-well cards until student, Bella Snow, decided that she wanted to make Jacob a mobile with origami paper cranes as a get-well gift. She worked on the mobile during lunch and stayed after school to get it finished. She chose the crane project because cranes represent good fortune and longevity in Chinese, Japanese and Korean cultures.

“I just wanted to show Jacob that we were thinking about him and give him something special for his room,” said Bella. “I just wanted him to know that we care and to give him hope.”

Jacob was recently been released from the hospital and is back in class. Bella and Jacob’s classmates decided to create a 1,000 crane project in honor of Julian making it an all-school project because it is believed that if you fold 1,000 origami cranes, your wish would come true. The entire school is making origami cranes and Jacob just recently folded his first crane for Julian.

“It was really awesome that Bella created the mobile for me when I was in the hospital. It really showed that everyone cared,” said Jacob. “It feels good to know someone is thinking about you and we want to be sure Julian knows we care for him.”

Other ways Jefferson Middle School is helping Jacob and Julian and their families is to hold a Penny Wars similar to JHS Penny Wars. Each grade level collects money and the winning grade gets to throw pies in the face of the Jefferson Principal and staff. The Jefferson Student Council also decided to do a Talent Show at the beginning of April with the help of music teacher, Rachel Selice and Library Media Specialist Julie Livengood, with all proceeds going to Julian and Jacob’s families.

“It’s important for our kids to be involved in these events because it not only raises awareness, but also provides our kids with hope, strength, determination, and a sense of belonging. We are a school family…we look out for each other,” said Jefferson Middle School Principal Leslie Melquist. 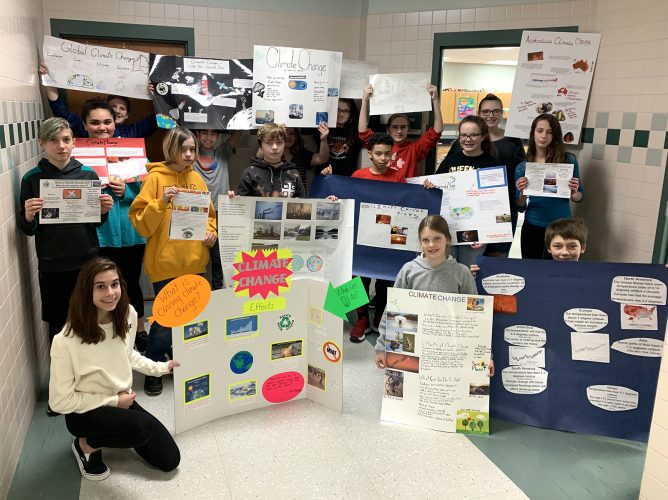 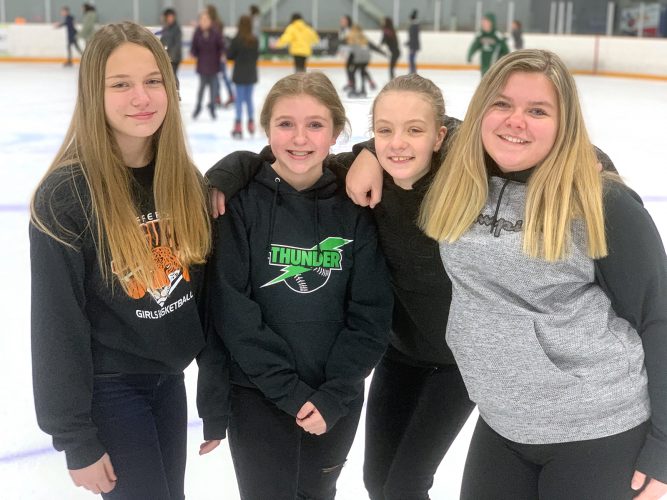 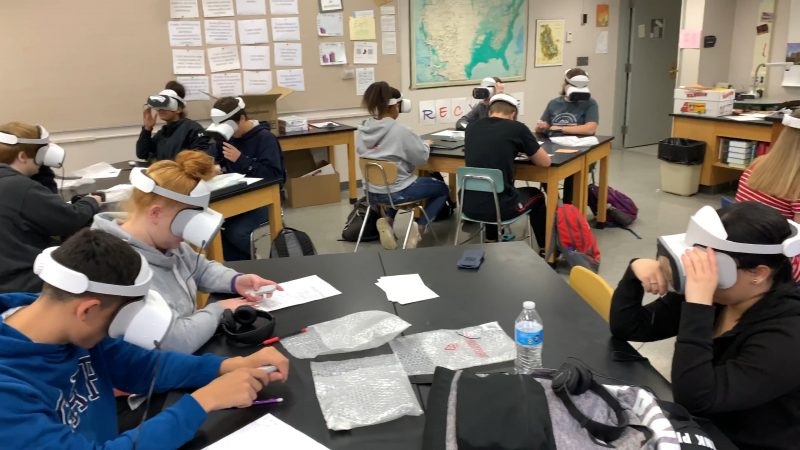